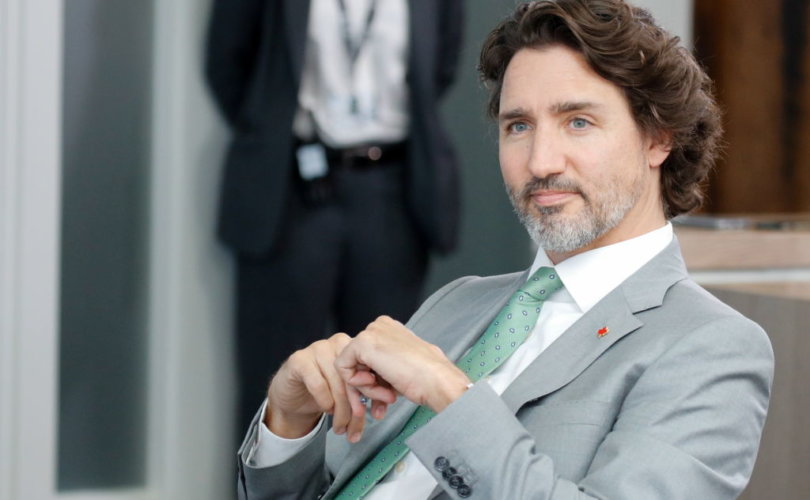 (LifeSiteNews) – Canadian-born Jewish author Diane Bederman blasted Prime Minister Justin Trudeau as an “immoral” and “evil man” for the leader’s targeting of the vaccine free, saying the lessons learned from the  Nuremberg Trials have been forgotten.

“Here we are in 2022 and our leaders are scapegoating the non-vaccinated, blaming them for the continuation of the pandemic. Like other evil leaders, they divide rather than unite,” Bederman wrote in an January 10 opinion piece titled “Is Comparing Covid Policies with the policies of Nazi Germany Antisemitic?” which was republished by the New York Orthodox Jewish outlet the JewishPress.

“They promote fear rather than courage and strength. Pit one group against another. They ignored the lessons we were to have learned from WWII.”

Throughout the piece, Bederman made a direct comparison between the rhetoric of 1930’s Nazi Germany, which targeted the Jews, and what politicians have gotten away with thus far in targeting the vaccine free, and in the name of combating the COVID crisis.

“Does anyone, today, believe that the Germans had any idea of the result of their obedience? That it would lead to the Shoah? They were just following the orders, I mean edicts, of their politicians; one edict at a time; giving up one freedom after another,” Bederman wrote.

Bederman noted how in 1930’s Nazi Germany the targeting of the Jews began with the “Nuremberg Laws, the Reich Citizenship Law and the Law for the Protection of German Blood and German Honor in 1935 that scapegoated the Jews; they were not to be tolerated.”

Said Trudeau of the vaccine free, “They are extremists who don’t believe in science, they’re often misogynists, also often racists. It’s a small group that muscles in, and we have to make a choice in terms of leaders, in terms of the country. Do we tolerate these people?”

His words were met with immediate backlash from many Canadian politicians and media personalities such as columnist Rex Murphy.

Canada’s federal government under Trudeau just recently mandated that all truckers be jabbed against COVID,  which has led to driver and supply shortages.

Also, effective from December 1, 2021, Trudeau enacted a policy banning Canadians over 12 who have chosen not to get the shots from traveling by air, sea, or train.

Bederman: ‘Has no one been taught the Nuremberg Code?’

In the opinion piece, Bederman noted that it is not antisemitic to compare the “policies of Covid with the policies of Nazi Germany.”

“I put it to you that it is antisemitic not to compare the two. It means we have forgotten the lessons we were to have learned from the Nuremberg Trials. Trials that were the result of Nazi policies that had led to the eradication of 6 million Jews,” Bederman wrote.

“The trials exposed the abuse of medicine by evil doctors, like Mengele, which led to the Nuremberg Code, forbidding coercive medical measures, and the Nuremberg Defense, which gives one the right and obligation to refuse to follow immoral and unethical orders; no matter who gives the order.”

Bederman then wrote, “Has no one been taught the Nuremberg Code?”

“Is that the problem? We ignored one of the most important documents ever written regarding the sanctity of all life because we saw how easily man-made laws bring out the dark within us.  A document that honoured the murdered and kept their memory alive, and here we are with leaders behaving like Nazis,” Bederman added.

“Look how easily the Germans took to showing their papers to authorities. Heaven help you if you did not have those papers. We would never behave like that! But we did, and we do. And it is a travesty to the memory of the dead.”

Bederman praised Dr. Peter McCullough, Dr. Robert Malone, and Canadian Dr. Kulvinder Kaur, who have come out against coercive COVID jab mandates and who have talked about the well-known negative side effects caused by the jabs.

Bederman then said what is needed soon is a new Nuremberg trial with “Anthony Fauci in the prisoner’s box.”

“NEVER FORGET It seems the previous trials have been forgotten. And that is antisemitic,” Bederman wrote.

She noted how “If we had remembered, as we promised NEVER FORGET, we would never have allowed our elected officials, leaders, doctors, to take away our God given rights and freedoms.”

“We would never have allowed these people to separate us into essential and nonessential, when all life is sacred, separate us from our elderly loved ones, desperately in need of care,” Bederman added.

The COVID-19 injections approved for emergency use in Canada have been associated with severe side effects such as blood clots, rashes, miscarriages, and even heart attacks in young, healthy men. They also have connections to cell  lines derived from aborted babies. As a result of this, many Catholics and other Christians refuse to take them.