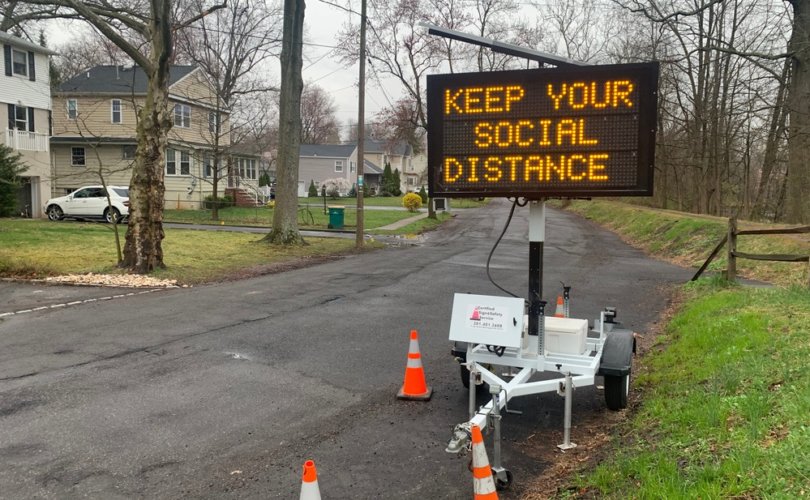 May 12, 2020 (Thomas More Society) — A 45-year-old Orthodox Jew emerges from a boiler room, quivering and shaking. A fellow worshipper examines pants that were ripped while jumping a fence. A dozen young children cower upstairs after a police officer opens the front door of their home, uninvited. This occurred shortly after law enforcement officers interrupted a morning prayer service, frightening members. The prayer service had been held outdoors in order to accommodate social distancing requirements.

Eventually, the adults return to the backyard of the synagogue Premishlan in Lakewood, New Jersey, where they will worship outdoors in order that they may flee when they see the police coming. It may sound like the opening moves of Kristallnacht, the 1938 Nazi pogrom against the Jewish people, but it is only COVID-19 under New Jersey’s Order 107 banning “Gatherings of Individuals,” as exercised by the police of Lakewood on April 13, 2020. On May 4, 2020, the Thomas More Society filed a lawsuit in federal court against New Jersey’s governor and chief law enforcement officer on behalf of Rabbi Yisrael Knopfler and Reverend Kevin Robinson.

A little over three weeks before Rabbi Knopfler’s congregants fled in fear, on March 20, 2020 — the day prior to Order 107 going in effect — parishioners at Saint Anthony of Padua Church in North Caldwell, New Jersey — 70 miles north of Lakewood on the Garden State Parkway — were preparing for Mass. A local police officer arrived and demanded that the Mass be cancelled. As Reverend Kevin Robinson was threatened with arrest, his congregation cowered anxiously in the basement, not unlike what their Orthodox counterparts in Lakewood would soon do.

After the North Caldwell police chief warned him that charges would be filed for violating Order 107, Pastor Robinson refrained from offering Mass. A related administrative order (Order 2020-4) issued by the Superintendent of the State Police, in his capacity as State Director of Emergency Management, “clarifies” that gatherings of 10 or fewer people are allowed but only under the vague proviso that such gatherings are “presumed” lawful unless there is “clear evidence to the contrary.”

This ten-person limit reduces the allowable Catholic congregation to 7 people or fewer, depending on the type of Mass and number of church personnel needed to execute it. For the rabbi and his congregation, the problem is even more acute: Jewish synagogue prayers require a minimum quorum of ten men. That means that there would be no additional people allowed. Under these constraints, a bride could not even attend her own wedding.

“This is an alarming case of extreme governmental overreach,” stated Thomas More Society Special Counsel Christopher Ferrara. “Order 107 is beset by vagaries, ambiguous ‘clarifications,’ and double standards. The alleged enforcement of this troublesome order has violated Reverend Robinson’s and Rabbi Knopfler’s constitutional rights under the First and Fourteenth Amendments. These religious leaders were persecuted. Their rights to the free exercise of religion, their freedom of speech, assembly, and expressive association were trampled upon.”

“Under Order 107, people can sit in business offices without numerical limitation, but not in churches or synagogues,” added Ferrara. “The same accountant or lawyer who can sit in an office with a hundred people is subject to criminal prosecution for ‘disorderly conduct’ if he sits in a church or synagogue with more than 9 others. This is absurd. Father Robinson and Rabbi Knopfler are entitled to First Amendment liberty, equal protection, and substantive due process, which they did not receive. This is an intolerable breach of the rights due every American and cannot be allowed to stand.”

Read the Thomas More Society’s First Amended Complaint for Civil Rights Violations, Injunctive Relief and a Declaratory Judgement on behalf of Reverend Kevin Robinson and Rabbi Yisrael A. Knopfler, filed with the United States District Court for the District of New Jersey — Newark Division in Rev. Kevin Robinson and Rabbi Yisrael A. Knopfler v. Philip D. Murphy, Governor of the State of New Jersey, in his official capacity, and Colonel Patrick J. Callahan, Superintendent of State Police and State Director of Emergency Management, in his official capacities, on May 4, 2020, here.