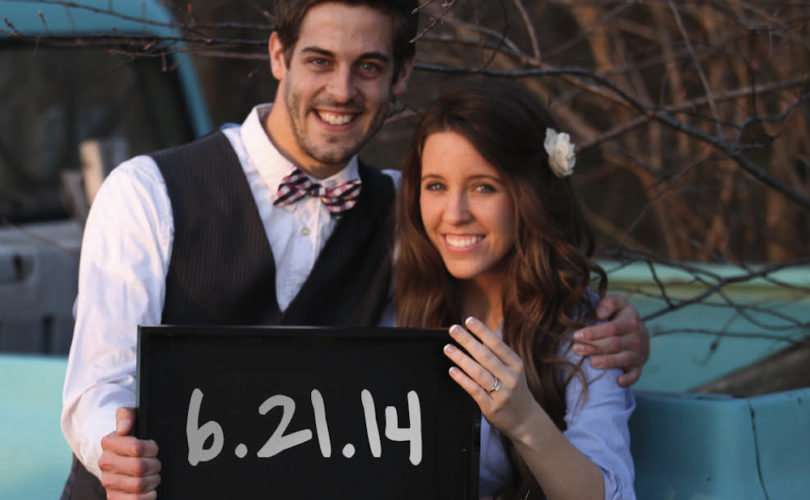 August 4, 2017 (LifeSiteNews) — Derick Dillard, son-in-law of Jim Bob and Michelle Duggar of “19 Kids and Counting” reality-TV fame, is being pilloried as a “transphobe” because he dared to tweet that “transgenderism” is a “non-reality” that defies God's created order.

Reacting to a TLC (The Learning Channel) promotion of a new season for its show “I Am Jazz” featuring “male-to-female” “transgender” teen Jazz Jennings, Dillard tweeted yesterday:

What an oxymoron… a “reality” show which follows a non-reality. “Transgender” is a myth. Gender is not fluid; it's ordained by God. https://t.co/YxzH5o5Ujx

Then the predictable liberal media and Twitter storm ensued.

Many Twitter fans of Jennings accused Dillard, a committed Christian who frequently tweets about Bible verses, of promoting “hate” and being a bully. Hundreds demanded that TLC, which also airs the Duggar’s reality show, drop it or at least banish Dillard for his politically incorrect message. A few Twitter users came to his defense.

“Please do not continue to air @derick4him [Dillard’s Twitter handle]. How dare he post such an ignorant tweet, especially in regards to another @tlc cast member,” tweeted Kelly (@Owiemom).

US Weekly, a celebrity magazine, led its email newsletter with this headline: “Jill Duggar's Husband Derick Dillard Slammed for Transphobic Jazz Jennings Tweet.” The adjoining article was bereft of any viewpoints defending Dillard and ended with this paragraph:

“Some people accused the father of two (he and Duggar, 26, share sons Israel, 2, and Samuel, 3 weeks) of bullying a teenage girl, while others turned the tables and took a few jabs of their own. ‘I think you should consider transitioning into a real man,’ one fan wrote to Dillard.”

The next day, the media were reporting on Dillard’s “clarification,” in which he continued to refer to Jennings using the male pronoun matching the latter’s biological DNA, tweeting: “I want to be clear. I have nothing against him. I only have issue with the words and definitions being propagated here.”

USA Today, which like virtually all major media uses pro-“transgender” pronouns, did not follow suit in reporting on the teenager’s widely-perceived response to Dillard: “Thursday afternoon, Jennings responded to Dillard without mentioning him by name. “Every day, I experience cyber-bullying, but I keep sharing my story,” she reasoned. “Today was no different.”

If Jennings was addressing Dillard’s initial tweet, he was expanding the definition of “cyber-bullying” to include criticism of LGBTQ lifestyles, including faith-based opposition — as opposed to insults, vicious name-calling and other types of abuse. Many LGBT activists much older than Jennings similarly conflate criticism with “hate,” bigotry and “phobia.”

TLC issued a statement to USA Today by Shannon Lianes, its VP of publicity, who said, “Derick Dillard’s personal statement does not represent the views of TLC.”

One Twitter user, @michaelawaffles, compared Jennings’ body-altering project to Dillard getting his crooked teeth fixed, taunting Dillard: “If God makes no mistakes and ‘transgender is a myth’ then why are you trying so hard to fix your crazy teeth. GOO MAKES NO MISTAKES, DERICK.”

To that, another Twitter user, “Queasy Pitbull,” responded: “Good dental care is also linked to longer, healthier lifespan. Not so much filling yourself with hormones on a daily basis.”

Jennings, born Jaron Bloshinsky, started taking puberty blockers at age 10 and estrogen at age 12, according to Laurie Higgins of Illinois Family Institute. People magazine reports that the upcoming third season of Jennings‘ TLC show, I Am Jazz, “will focus on the transgender reality star’s decision to undergo the surgery she calls ‘the last step” in the journey to becoming her most authentic self.’”

‘Kind of excited’ about ‘bottom surgery'

Discussing his upcoming “bottom surgery” in which the penis is destroyed and the skin turned inward to create a makeshift “vagina,” Jennings told People in June, “There’s definitely been a lot of complications in terms of the bottom surgery.”

Intimating that his penis is artificially small due to his “transgender” hormone therapy, Jennings, 16, said, “We’ve been talking about it a lot. You’ll see in the show, there’s some problems because I’ve been on the hormone blockers and basically I haven’t had a lot of development — so we’re debating if I have enough material to work with.”

He (identified as “she” by People) said, “I haven’t gotten the procedure yet, but this season you’ll see me go on consultations and finding the surgeon of my choice.”

Jennings said his mom is “especially fearful because she doesn’t like me going under anesthesia and all that stuff,” but said he is “not really worried about it. I’m actually kind of excited. This is something I’ve always looked forward to. I don’t know — it’s going to be fun.”