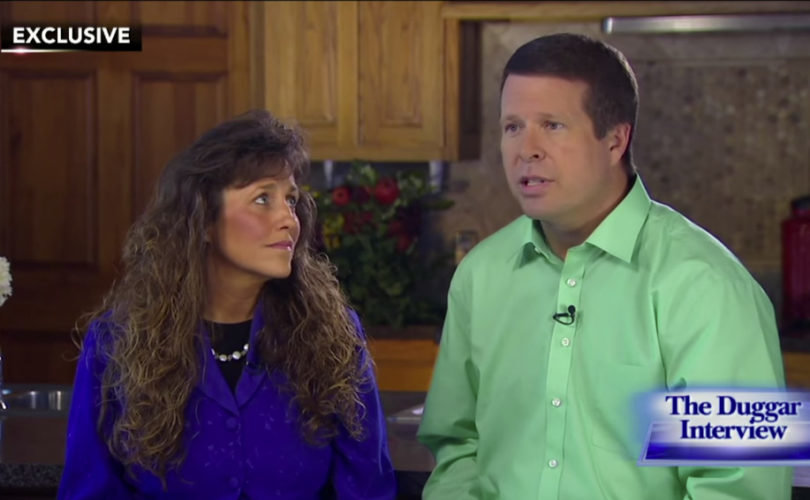 June 4, 2015 (LifeSiteNews) — In the first media interview since their eldest son resigned from the Family Research Council, the parents of “19 Kids and Counting's” Josh Duggar described how they handled what Jim Bob Duggar described as “one of most darkest times our family has ever gone through.”

“We were just shocked and devastated,” Michelle Duggar told Fox News' Megyn Kelly about how she and her husband reacted to then-14-year-old Josh telling them that he had, in Jim Bob’s words, “improperly touched [two] of our daughters.”

The Duggars told Kelly that Josh's decision to tell them what he had done gave them “one ray of hope in that Josh had a tender conscience.”

According to Jim Bob, Josh told them that “he was just curious about girls,” and had touched more than one of his sisters over their clothes while they were asleep.

“The first [thing we did] was to protect the girls,” said Jim Bob. Michelle said it was important that both parents find out “if something else had happened.” The Duggars said that none of their five daughters knew what had happened at first. After Josh committed similar acts and was sent away, Jim Bob and Michelle told them what Josh had done.

“Looking back, we did the best we could under the circumstances,” Jim Bob said, noting that they had first attempted to deal with Josh's actions “in-house.”

The Duggars say they punished their son and kept watch over him, even taking him to work with Jim Bob. However, he continued his actions, putting his hand on at least one of his sisters' breasts as she lay asleep on a family couch.

Josh told his parents of his continued actions, which eventually included touching girls “under their clothes.” Jim Bob described Josh's actions as touching “for a few seconds,” and then going to his parents, “crying.”

After he came to them a third time, the Duggars decided to get outside help — including by “[pulling] Josh out of the home.” They sent him to a work camp and training center in Little Rock, Arkansas, that “helped young men who had made unwise choices in their lives to get straightened out.”

That center was in a building with a prison ministry and a police department. The Duggars sent Josh to work construction with the man who ran the center, as well as receive counseling.

Asked by Kelly why they didn't go to counseling sooner, Jim Bob said “reaching [Josh's] heart first” was their goal, especially since they had found out from an acquaintance who worked with juvenile sex offenders that “the success rate is not very good.”

“As parents, you're not mandatory reporters,” said Duggar, responding to critics who say he and Michelle should have gone to police. Getting Josh out of the home and to the camp was “probably the best decision we made through this whole process.”

“God really worked in his life, and in fact, he broke,” said Jim Bob, describing that Josh asked God and those he had assaulted for forgiveness. It was at that point the Duggars took Josh to the police, to face legal consequences for his actions.

Kelly noted that Josh touched at least one sister who was below the age of 10, and Jim Bob said that was when they pulled their son out of their home. “He can't be here,” he said, and their son went to the camp the same day.

When Kelly pointed out that the work camp counselor was not a licensed psychologist, Duggar said that the camp was a “turning point” for Josh. At the time he left for the camp, Josh had fondled four sisters and a babysitter.

Other therapy took place when Josh came back from the camp. “All of our children received professional counseling, including Josh, who paid for his own counseling himself,” said Michelle.

“From an accredited, professional counselor,” said Jim Bob, who told Megyn Kelly that he and his wife did not consider their son a threat after the counseling. While safeguards were still in place, “Josh was a changed person.”

“There were a lot of things we put in place” and learned, said Michelle. “Girls don't sit in boys' laps,” and two children are not allowed to play hide-and-seek alone, and male babysitters are not allowed.

As part of the counseling process, the Duggars took their eldest child to the Arkansas State Police headquarters, which they “felt was an important step” for Josh.

“We didn't know if they were going to arrest him,” said Jim Bob. Josh “shared everything” with the officer they spoke with, as well as “a witness.”

What the Duggars say they didn't know for “years” was that the officer was looking at child pornography, a crime for which he is serving 56 years in prison. That officer, according to Kelly, says Josh only described “one incident” to him.

The Duggars disputed the officer's claim, and Jim Bob said the officer broke the law by not acting on what Josh told him.

Five years after the family was back together, the show “19 Kids and Counting” was launched. Kelly asked why the Duggars put their family on TV, given what Josh had done and how TV could expose them to public scrutiny.

“We have nothing to hide,” said Jim Bob. “We had taken care of all that years before.”

“All this had been taken care of five years before. We had a clean bill of health from the state,” he said. “That was actually a sealed juvenile record. They had told us that all this stuff was done, as a juvenile…[it] was sealed. Under law, there was no way this could come out.”

When Josh's actions were made public in May, Jim Bob said that while he had hoped that wouldn't happen, he also told God that “if people can see that Josh, who did these very bad things when he was a young person, that God could forgive him for these terrible things, then I hope other people realize that God could forgive them and make them into a new creature.”

Asked whether they knew about any agendas the police chief who released Josh's record could have, the Duggars answered in the negative. Jim Bob said he believes his family was on “the list” of things the police chief said she wanted to take care of before retiring this year.

Jim Bob said he and Michelle are in touch with attorneys about suing the chief and possibly the city of Springdale. According to Fox News' Los Angeles Correspondent, Trace Gallagher, “the release was approved by the Springdale police chief and city attorney.  Exactly why they approved it is still a mystery, because they haven't commented or returned our messages. But the mayor of Springdale supported them, saying, 'from every indication I have, the chief and city attorney reluctantly did what they had to do to comply with the state freedom of information law.'”

However, Gallagher says “freedom of information laws in Arkansas clearly state 'Records of the arrest of a juvenile, the detention of a juvenile shall be confidential and shall not be subject to disclosure under the Freedom of Information Act.'”

The records were subsequently destroyed at the request of an alleged victim — too late for the Duggars, and too late for victims whose names were redacted, but whose identities are indicated by other details.

“The big picture is protecting juvenile records,” Jim Bob told Kelly, describing how the family's daughters “did not want this out.”

“No victim wants their minor story to be told. Every victim should have the right to tell their own story, not a tabloid.”

Kelly pushed the Duggars on their prior image as an ideal Christian family, and accusations of hypocrisy by critics. “Josh once said, 'We are the epitome of conservative values,'” she said.

“They preached family values,” Kelly said, intoning critics. “They weren't honest with the world about who they were.”

“Every family has things happen,” said Jim Bob, noting that “you don't go up to total strangers” and share every detail of your life. “Everybody deals with something.”

Pushed further about the family's promotion of Christian values, Jim Bob said that “our son violated God's principles. … That was terrible.”

“What Josh did was inexcusable, but it was not unforgivable.”

Near the end of the interview, Kelly pointed out that Michelle had done a robo-call against a law that would allow transgender people to use the locker rooms of the opposite sex. In the call, Michelle expressed concerns about child molesters — something Kelly noted is being brought up by critics.

“I think that protecting young girls, and not allowing young men, and men in general, to go into a girls' locker room, is just common sense,” responded Michelle.

“This is different, because you injected child molestation into it,” said Kelly. Jim Bob immediately jumped in, saying that his wife had addressed pedophilia — “an adult who preys on children,” he said. Josh “was a child preying on a child.”

In the robo-call, Michelle said, “I don’t believe the citizens of Fayetteville would want males with past child predator convictions that claim they are female to have a legal right to enter private areas that are reserved for women and girls.”

“We should never place the preference of an adult over the safety and innocence of a child,” she said in the call, and closed by asking, “Parents, who do you want undressing next to your daughter at the public swimming pool’s private changing area?”

“He was a child preying on a child,” said Jim Bob, answering “no” along with Michelle when asked by Kelly whether they “view Josh as a pedophile.”

Discussing critic reactions, Michelle said, “I know that every one of us has done something wrong. That's why Jesus came. I feel that this is more about there's an agenda, and there's people who are purposing to try and bring things out, and twisting them, to hurt and slander.”

Both of the Duggars said they believe they are being targeted for their Christian beliefs, and Jim Bob said that “Christians struggle” with sin “every day,” contrary to the perfection critics call for.

Asked about the future of “19 Kids and Counting,” Jim Bob said, “We are fine whether they film us or not. … We're going to go and live life, and go and serve God and the world.”

“I wonder why all this press isn't going after the system for releasing the records,” said Jim Bob, noting the illegality of the release of Josh's record. “We trusted the police department,” said Michelle. “Our children poured out their hearts.”

“And then to have their trust betrayed. … To have those things twisted and shared in a slanderous way — story after story, tabloid after tabloid — as a mom, that breaks my heart for my girls.”

“They've been victimized more by what has happened in these last couple weeks than they were 12 years ago,” because they were not aware of what Josh had done in 2002 and 2003, said Michelle.

“We have not been keeping secrets. We have been protecting people who…should be protected,” said Michelle, who criticized people “for targeting the family for profit.”

Michelle closed out the interview by saying “one thing I know: God is going to use all this for good.”

What to do when your own child is a sex abuser