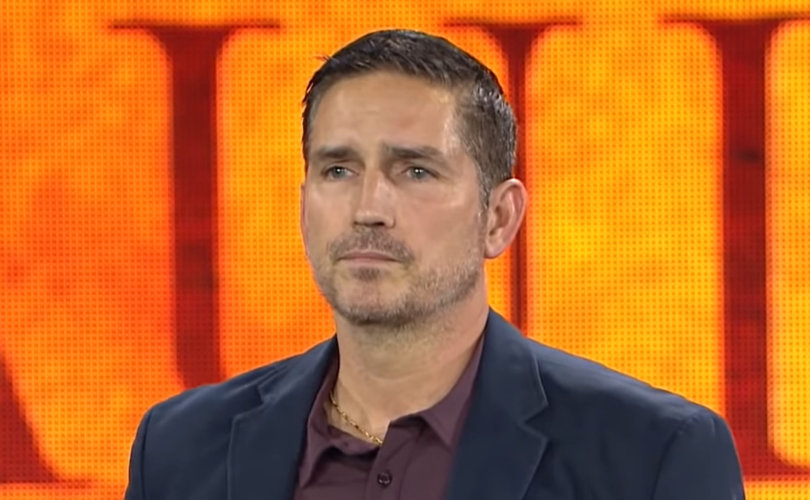 LAS VEGAS (LifeSiteNews) — The Passion of the Christ actor Jim Caviezel topped headlines this week when he gave an impassioned address at a Las Vegas “patriot” convention urging listeners to fight for freedom, “set yourselves apart from this corrupt generation,” and “be saints.”

After speaking about the tremendous challenges and blessings he experienced playing the role of Jesus Christ in The Passion, Mel Gibson’s 2004 cinematic re-telling of Christ’s passion and crucifixion, the devout Catholic actor spoke about the challenges facing the United States.

“In our country today, we are only too happy to go with the flow,” Caviezel said. “We want to avoid the hard choices. We have enshrined the freedom now where all choices are equal no matter what the consequences are. But is that true freedom? Pope John Paul II in 1995, during a visit to Baltimore, said, ‘Freedom consists not in doing what we like, but in having the right to do what we ought.’”

Caviezel then proceeded to deliver an impassioned recitation of Ronald Reagan’s October 27, 1964, “This is a Time for Choosing” speech with “a few amendments” to make the speech more applicable to the challenges facing Americans today.

Caviezel began by quoting Reagan in urging Americans to recognize “that we’re in a war that must be won.”

“Those of us who would trade our freedoms for the soup kitchen of the welfare state have told us that they have a utopian solution of peace without victory. They call their policy accommodation and they say if we only avoid any direct confrontation with this enemy, he’ll forget his evil ways and learn to love us. All those who oppose them are indicted as warmongers,” he continued, directly quoting the former president who was speaking at the time of the threat posed by the Soviet Union.

Caviezel, an outspoken pro-life advocate who has called abortion “America’s great sin,” then took aim at proponents of abortion, paraphrasing the words of the famous speech to add, “They say we offer simple answers to complex problems, and yet they have the nerve to call it ‘choice.’”

“Well, perhaps there is a simple answer, not an easy answer, but a simple one,” the actor recited: “[That] you and I would have the courage to tell our elected officials that we want our national policy based on what we know in our hearts is morally right.”

Using the framework of the Cold War-era speech to decry the evils of human trafficking and abortion, Caviezel went on: “Ladies and gentlemen, we cannot buy our security of one nation under God, our freedoms in Christ our Savior, from the threat of the devil any longer by committing an act of immorality so great as saying to millions and millions of little children now caught behind the Iron Curtain of sex trafficking and abortion: ‘Give up your dreams of freedom now because in order to save our own skins, we’re just too willing to make a deal with your slave masters.’”

Continuing to quote Reagan in observing that “surrender” is the only “guaranteed way you can have peace” and that “every lesson in history tells us that the greater risk lies in appeasement,“ the actor described the battle now faced by Christians who find themselves in the midst of a spiritual and political struggle between following God and yielding to a culture in which even prominent faith leaders have failed to champion fundamental moral values.

Caviezel argued that “our priests, our pastors … sadly, even our Pope,” have given conservatives what Reagan called “no choice between peace and war, only between fight and surrender.”

Caviezel warned that failure to stand up for what is right will have serious consequences, leading to voluntarily surrender to evil.

“Our surrender will be voluntary because you see, by then we will have been so weakened from within spiritually, morally, economically,” Caviezel recited, paraphrasing Reagan’s words by saying that “[Satan] believes this because from our side, he’s heard voices pleading for peace at any price.”

Caviezel then took a swipe at the current public health response to the COVID-19 pandemic, which many conservatives argue has deprived millions of their essential rights to work, to breathe freely, and to make their own medical decisions about which drugs to take or refuse, rewording the speech to say, “as one commentator put it, he’d rather live on his knees with his mask on than die on his feet.”

The actor continued to use the words of Reagan to finally urge listeners to refuse to appease evil and to have “the courage to tell our enemies there is a price we will not pay. There is a point beyond which evil must not advance.”

“If we lose this war and in so doing, lose this great way of freedom of ours, history will record with the greatest astonishment that those of us that had the most to lose did the least to prevent its happening,” Caviezel quoted.

Caviezel then asked the audience, “Do we even believe in life, liberty and the pursuit of happiness?”

Again quoting Reagan, Caviezel argued “it’s high time now to ask ourselves if we still even know the freedoms that were intended for us by our founding fathers.”

The Catholic actor again referred to Pope John Paul II’s definition of freedom, which accords with a traditional understanding of moral liberty.

“Every generation of Americans needs to know that freedom exists not to do what you like, but having the right to do what you ought,” he said. “My fellow Christian warriors, set yourselves apart from this corrupt generation: be saints.”

All need to listen to this speech “Freedom is the right to do what we ought”…..Jim Caviezel: HISTORIC SPEECH & “The Storm is Upon Us” @ The TPV Patriot Double Down in Las Vegas | Media https://t.co/vytGo5B1TI

“I see before me a whole army of my countrymen here in defiance of tyranny. You’ve come to fight as free men, and free men you are. What will you do with that freedom? Will you fight?” he asked.

Making distinctly Catholic additions to the inspiring Braveheart battle cry, Caviezel concluded, “We must fight for that authentic freedom and live, my friends. By God, we must live. And with the Holy Spirit as your shield and Christ as your sword, may you join St. Michael and all the angels in defending God. He’s sending Lucifer and his henchmen straight right back down where they belong. We are headed into the storm of all storms. Yes. This storm is upon us. But not without Jesus, our rudder. And in the words of Reagan, ‘evil is powerless if the good are unafraid.’ God bless you.”