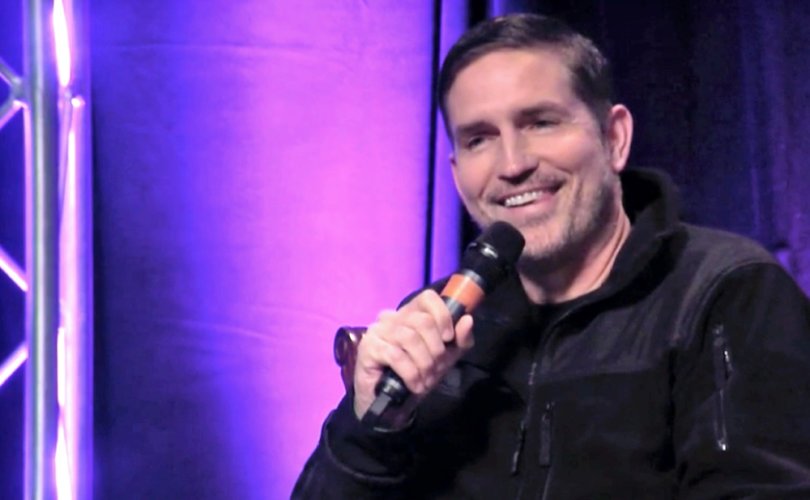 April 3, 2018, (LifeSiteNews) – Catholic actor Jim Caviezel, currently starring in Paul, Apostle of Christ, recently revealed how and why he selects his film roles.

The actor, who famously played Jesus in The Passion of the Christ before going on to the role of Gospel-writer Luke, said he chooses films which can “bring the most souls back to [God].”

Caviezel said in a March 30 interview with Christian Post that while playing Jesus in the 2004 Passion of the Christ he sensed that God wanted him to act in films that evangelize.

“When [God] came close to me in ‘The Passion’ when I was on that cross, [He said], 'They don't love me. There are very few,”’ Caviezel said.

“I was like, ‘Well, I'm going to love You, and I'm going to tell You that I love You. Tell it publicly, I don't care. I'm less afraid of ISIS than I am the media.’” he added.

“That's why our Lord is so alone — His creatures do not love Him,” Caviezel continued.

“And, He could force Himself on us, but would that be love? I don't think so. I'm so blessed because I get to convey those stories, but do it in a way … that I know can bring the most souls back to Him, even those that don't believe,” he added.

Before accepting the role of Luke in Paul, Apostle of Christ, Caviezel said he prayed: “Lord, I don't want the world to see me, I want them to see You. You gotta get closer to me.”

Because the same life-endangering persecution of Christians experienced by St. Paul continues in our day, Caviezel said “he's inspired by Christians, who, like Paul, sacrifice everything for their faith, as they will be remembered for loving God in a special way.”

In the nearly fifteen years since filming The Passion of the Christ, Caviezel has striven to remain true to his promise to highlight the love of God not only in his personal life, but in the films he acts in. He has especially shared this message with young people.

Last month, speaking before a packed house at the University of Steubenville, Ohio, Caviezel told students that they must set themselves apart from this “corrupt generation” and “be saints.”

“You weren’t made to ‘fit in,’ my brothers and sisters. You were born to stand out. Set yourself apart from this corrupt generation. Be saints,” he said.

The actor  told the students that they are at “war” with the “most dangerous enemy” who wants to strip them of their freedom, of having the right “to do what you ought.”

His words were met with thunderous applause and a standing ovation.

Earlier this year, during a surprise appearance at a national gathering of Catholic college students, Caviezel said that Catholics must be ready to risk their lives and reputations to defeat evil in the world.

Only through the faith and Christ’s wisdom can we be saved, Caviezel said, but it will also take people who are prepared to fight, sacrifice and suffer.

The actor has spoken openly about his faith and pro-life convictions in the past, and shared how his experience making The Passion of the Christ has affected him spiritually.

He has also advocated for adoption, and been open about his and wife Kerri’s experience as adoptive parents.

Referring to his role in Paul, Apostle of Christ, Caviezel told one gathering of young people: “I want you to have the courage to step into this pagan world and shamelessly express your faith in public.”

“The world needs proud warriors, animated by their faith,” he added. “Warriors like St. Paul, and St. Luke, who risked their names, their reputations, to take their faith, their love for Jesus into the world.”

“God is calling each one of us – each one of you – to do great things,” he said, as he warned against failing to respond, dismissing God’s call.  And he said that it is now time for this generation to accept that call, giving ourselves entirely to Him.

“But you first must make the commitment to start praying,” Caviezel said, “to fast, to meditate on the Holy Scriptures and to take the holy sacraments seriously.”