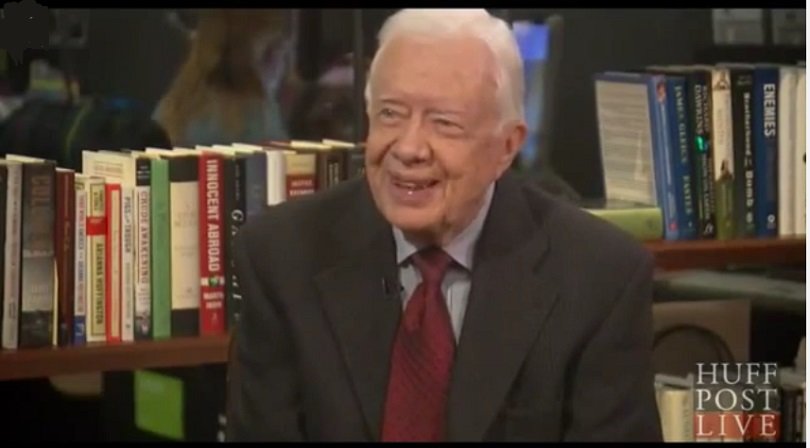 WASHINGTON, D.C., July 8, 2015 (LifeSiteNews) – WWJD – What Would Jesus Do? – became a national catchphrase, inviting people to model their lives after Christ. Former President Jimmy Carter thinks he knows how the Nazarene would approach two hot-button issues of today.

“I believe Jesus would approve of gay marriage,” Carter said this week in an interview with HuffPost Live.

And he believes Jesus would approve abortion in the cases of rape and incest.

Carter told interviewer Marc Lamont Hill, “I never have run across any really serious conflicts between my political obligations and my religious faith.”

When Hill asked if Jesus Christ would support redefining marriage, Carter replied, “I believe Jesus would. I don’t have any verse in Scripture.”

“I believe Jesus would approve gay marriage, but that's just my own personal belief,” the 39th president said.

“I think Jesus would encourage any sort of love affair that was honest and sincere, and was not damaging to anyone else,” he added. “And I don’t think that gay marriage damages anyone else.”

However, he said that he felt some conflict enforcing the Supreme Court's Roe v. Wade and Doe v. Bolton decisions effectively legalizing abortion-on-demand throughout all nine months of pregnancy.

“I have had a problem with abortion, and this has been a long time problem of mine,” he said.

“I have had a hard time believing that Jesus, for instance, would approve abortion – unless it was because of rape or incest or if the mother's life was in danger.”

While the Christian tradition considers it licit, though tragic, should an unborn child die as an unintended consequence of trying to save a woman's life, it has rejected direct abortion from the very beginning.

Some who support abortion have pointed to such exceptions as a means of undermining the pro-life argument. “No one would argue that a mother can kill the child she just bore because it was conceived through rape or incest,” wrote Disciples of Christ Minister Rick Lowery, Ph.D., on The Huffington Post. “If we really think a recently fertilized egg is morally and legally exactly the same as a child recently born, how can we possibly allow these exceptions for abortion?”

Pundits dismissed Carter's claim that Jesus would support Carter's views on same-sex unions just because “he's got a good feeling about it.” At HotAir.com, AllahPundit wrote that Carter's political views changed his theology, rather than vice-versa. “If you support [same-sex 'marriage' and] you think the practice is moral (I should hope), and if you’re a Christian who believes something is moral, almost by definition you need to believe Jesus thinks so, too.”

Carter is not alone in asserting that Jesus would support redefining marriage.

The National Cathedral in Washington, D.C., also celebrated redefining marriage with a program on June 30 entitled “Honoring the Road of Love and Justice.”

However, many denominations – including the Roman Catholic, Eastern Orthodox, and Southern Baptist churches – have issued statements reinforcing the Christian religion's affirmation of the natural family.

Carter endorsed same-sex “marriage” in 2012, while promoting his study Bible. Last year, he said states should have the right to opt-out of granting or recognizing same-sex “marriages,” a right the Supreme Court denied in its Obergefell decision. However, in 2013, Carter told CNN that redefining marriage “should be a right nationwide. … It's coming.”

He has also said that, since the United States has elected its first African-American president, it is time for the country to elect its first openly homosexual president.