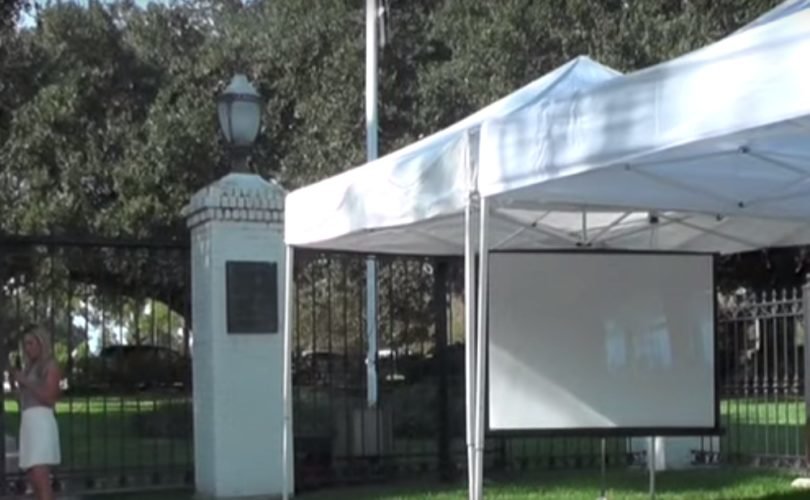 “Planned Parenthood has a right to protest,” the GOP presidential candidate wrote in an August 20 statement, adding that “anyone who shows up will have to witness first-hand the offensive actions of the organization they are supporting.”

“We hope the protesters will take a minute to watch them so they'll have an opportunity to see first-hand our concerns with Planned Parenthood’s practices,” he added.

Jindal went ahead with the large outdoor movie screen, but when about two dozen protesters showed up, they stayed far away from the screen showing one after another the seven videos released by the Center for Medical Progress detailing Planned Parenthood’s involvement in trafficking aborted baby body parts.

Protesters stayed far away from the Planned Parenthood videos we had playing on my lawn: https://t.co/A95udsnWCs pic.twitter.com/7l7RYt9TlU

Jindal released a Youtube video of the protest Friday titled “Too scared to watch.”

“Governor Jindal decided to play the horrifying Planned Parenthood videos on his front lawn, so the protesters could see why he made his decision,” stated a subtitle in the video. “The protesters moved their protest further away from the Governor’s Mansion so they didn’t have to listen to the horrifying videos. We can understand why they wouldn’t want to watch.”

Yesterday Planned Parenthood launched a lawsuit against the governor in an attempt to get its Medicaid funding back, but Jindal said he would stand his ground.

Today Planned Parenthood sued me, but I’m not backing down. Will you stand with me? https://t.co/NR4yqtxWos https://t.co/AC6XzrQcTV

The latest undercover video targeting the inhuman practices of Planned Parenthood provides evidence that the abortion business shipped the “intact” bodies of aborted babies to biological researchers for harvesting and experimentation.

Louisiana, one of five states that have cancelled state funding for Planned Parenthood, has been named the number one pro-life state by Americans United for Life for six years in a row.