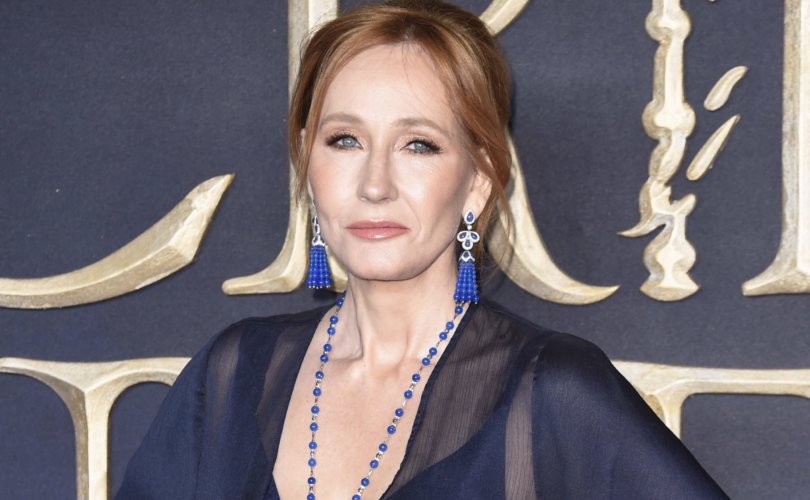 June 10, 2020 (LifeSiteNews) – J.K. Rowling, author of the best selling “Harry Potter” book series, has published a lengthy essay on her website today why she opposes the transgender agenda and refuses to “bow down” to it despite massive public pressure to capitulate.

“Well, I’ve got five reasons for being worried about the new trans activism, and deciding I need to speak up,” she wrote.

Rowling said she was “concerned about the huge explosion in young women wishing to transition and also about the increasing numbers who seem to be de-transitioning (returning to their original sex), because they regret taking steps that have, in some cases, altered their bodies irrevocably, and taken away their fertility. Some say they decided to transition after realising they were same-sex attracted, and that transitioning was partly driven by homophobia, either in society or in their families.”

She also argued that allowing men who identify as women into female-only spaces, such as bathrooms, shower rooms, and changing rooms, makes all women less safe.

“When you throw open the doors of bathrooms and changing rooms to any man who believes or feels he’s a woman – and, as I’ve said, gender confirmation certificates may now be granted without any need for surgery or hormones – then you open the door to any and all men who wish to come inside. That is the simple truth.”

“So I want trans women to be safe. At the same time, I do not want to make natal girls and women less safe,” Rowling wrote in her essay.

Rowling also argued that trans activism has resulted in the “erosion of women’s and girls’ rights” and the erosion of what it means to be female.

“I’ve read all the arguments about femaleness not residing in the sexed body, and the assertions that biological women don’t have common experiences, and I find them, too, deeply misogynistic and regressive. It’s also clear that one of the objectives of denying the importance of sex is to erode what some seem to see as the cruelly segregationist idea of women having their own biological realities or – just as threatening – unifying realities that make them a cohesive political class. The hundreds of emails I’ve received in the last few days prove this erosion concerns many others just as much.  It isn’t enough for women to be trans allies. Women must accept and admit that there is no material difference between trans women and themselves,” she wrote.

“But, as many women have said before me, ‘woman’ is not a costume. ‘Woman’ is not an idea in a man’s head. ‘Woman’ is not a pink brain, a liking for Jimmy Choos or any of the other sexist ideas now somehow touted as progressive. Moreover, the ‘inclusive’ language that calls female people ‘menstruators’ and ‘people with vulvas’ strikes many women as dehumanising and demeaning. I understand why trans activists consider this language to be appropriate and kind, but for those of us who’ve had degrading slurs spat at us by violent men, it’s not neutral, it’s hostile and alienating,” she added.

“But endlessly unpleasant as its constant targeting of me has been, I refuse to bow down to a (trans) movement that I believe is doing demonstrable harm in seeking to erode ‘woman’ as a political and biological class and offering cover to predators like few before it. I stand alongside the brave women and men, gay, straight and trans, who’re standing up for freedom of speech and thought, and for the rights and safety of some of the most vulnerable in our society: young gay kids, fragile teenagers, and women who’re reliant on and wish to retain their single sex spaces. Polls show those women are in the vast majority, and exclude only those privileged or lucky enough never to have come up against male violence or sexual assault, and who’ve never troubled to educate themselves on how prevalent it is.”

Rowling’s essay defended a series of June 6 social media messages she posted in which she spoke out on the issue of “transgenderism,” after receiving backlash for posting a Twitter message that said, “if sex isn’t real, there’s no same-sex attraction.”

In a June 6 Twitter message, Rowling commented on a report from Devex with the title, “Opinion: Creating a more equal post-COVID-19 world for people who menstruate.”

Rowling responded on Twitter to this report by saying, “‘People who menstruate.’ I’m sure there used to be a word for those people. Someone help me out. Wumben? Wimpund? Woomud?”

Rowling then followed with another message saying that “it isn’t hate to speak the truth.”

“If sex isn’t real, there’s no same-sex attraction. If sex isn’t real, the lived reality of women globally is erased. I know and love trans people, but erasing the concept of sex removes the ability of many to meaningfully discuss their lives. It isn’t hate to speak the truth,” Rowling tweeted.

After her tweets, Rowling was met with a backlash from many, including from the LGBTQ rights organization GLAAD.

“JK Rowling continues to align herself with an ideology which willfully distorts facts about gender identity and people who are trans. In 2020, there is no excuse for targeting trans people,” GLAAD said in a June 6 tweet.

Rowling replied that her comments were not meant to be hateful.

“I respect every trans person’s right to live any way that feels authentic and comfortable to them. I’d march with you if you were discriminated against on the basis of being trans. At the same time, my life has been shaped by being female. I do not believe it’s hateful to say so,” Rowling tweeted.

Also criticizing Rowling was Daniel Radcliffe, who starred as the lead actor at a young age in movies based on Rowling’s Harry Potter series.

Radcliffe said in a blog post for an LGBTQ group on Monday that “Transgender women are women.”

In her essay, Rowling wrote that the hatred toward her from some in the “trans” community began shortly after she voiced support for Maya Forstater in December.

Forstater is a tax specialist who lost her job over tweets where she said “men cannot change into women.” A judge ruled that Forstater’s belief that sex is determined by biology was not protected by law.

In her essay, Rowling wrote that she has concerns about young women who are looking to “transition” as well as those who are wanting to “de-transition (returning to their original sex), because they regret taking steps that have, in some cases, altered their bodies irrevocably, and taken away their fertility.”

“Some say they decided to transition after realising they were same-sex attracted, and that transitioning was partly driven by homophobia, either in society or in their families.”

Rowling found that “transgenderism” has undergone a recent shift.

“Most people probably aren’t aware – I certainly wasn’t, until I started researching this issue properly – that 10 years ago, the majority of people wanting to transition to the opposite sex were male,” she wrote.

“That ratio has now reversed. The UK has experienced a 4,400 percent increase in girls being referred for transitioning treatment. Autistic girls are hugely overrepresented in their numbers.”

Rowling’s essay touched on her own experience of living through a “violent” first marriage as well as being a “sexual assault survivor.”

“I’m mentioning these things now not in an attempt to garner sympathy, but out of solidarity with the huge numbers of women who have histories like mine, who’ve been slurred as bigots for having concerns around single-sex spaces,” Rowling wrote.

Rowling also wrote that if she were a young woman today she might have been tempted to change her gender.

“The more of their accounts of gender dysphoria I’ve read, with their insightful descriptions of anxiety, dissociation, eating disorders, self-harm and self-hatred, the more I’ve wondered whether, if I’d been born 30 years later, I too might have tried to transition,” Rowling wondered.

“The allure of escaping womanhood would have been huge. I struggled with severe OCD as a teenager. If I’d found community and sympathy online that I couldn’t find in my immediate environment, I believe I could have been persuaded to turn myself into the son my father had openly said he’d have preferred.”

Rowling also wrote that she did receive plenty of support after speaking about “transgenderism.”

“What I didn’t expect in the aftermath of my cancellation was the avalanche of emails and letters that came showering down upon me, the overwhelming majority of which were positive, grateful and supportive,” Rowling wrote.

“They came from a cross-section of kind, empathetic and intelligent people, some of them working in fields dealing with gender dysphoria and trans people, who’re all deeply concerned about the way a socio-political concept is influencing politics, medical practice and safeguarding. They’re worried about the dangers to young people, gay people and about the erosion of women’s and girls’ rights. Above all, they’re worried about a climate of fear that serves nobody – least of all trans youth – well.”

Rowling concluded her essay by saying, “All I’m asking – all I want – is for similar empathy, similar understanding, to be extended to the many millions of women whose sole crime is wanting their concerns to be heard without receiving threats and abuse.”