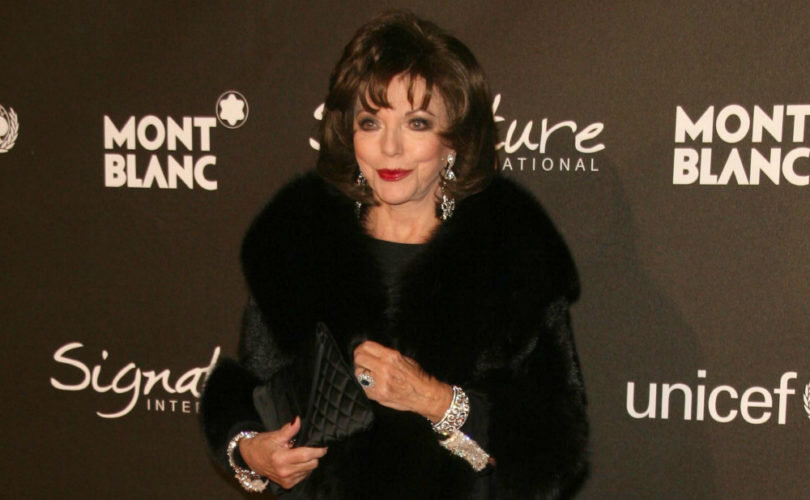 The British-born star is speaking out about being raped after her attacker showed her hardcore pornography and drugged her at the tender age of 17. She went on to marry him.

As her head began to swim, she realized “he had drugged my drink.”

“The next thing I knew, I was out flat on the sofa in that living room and he was raping me,” she said. “It felt so horrible.”

Reed, a matinee idol of his day, continued to ask her out. “It wasn’t my fault but I didn’t know, [so] I went out with him,” she said. In a short time, he asked her to marry him. “I really hated him, but I was so filled with guilt.”

She claimed over the years that Reed became violent with her and tried to traffic her. “I found out how really abusive he was – I used to be physically abused and physically assaulted, and the final straw was when he tried to sell me for £10,000,” she says.

Collins is speaking out as part of a new documentary, Brave Miss World, filmed by 1998 Miss World Linor Abargil, who was raped at knifepoint six weeks before being crowned Miss World.

Joan Collins warns that today's ubiquitous culture of degrading and violent pornography is preparing another generation for similar exploitation.

Collins' anecdotal observations would be supported by experts, who study smut's effects on human behavior. Mary Anne Layden, the director of the Sexual Trauma and Psychopathology program in the University of Pennsylvania's psychiatry department, found that males who consume pornography were more likely to view rape as more acceptable than men who do not. “Males who viewed sexual violence obtained higher scores both on scales measuring acceptance of interpersonal violence and the rape myth [the belief that women actually enjoy rape and suffer few negative consequences], when compared to males who viewed either a physically violent or neutral film,” she wrote in a paper. “The increase in attitudes supporting sexual violence following exposure to pornography is greater if the pornography is violent than if it is non-violent.”

She added, “A similar effect is seen even when the pornography is not violent. Males who are shown non-violent scenes that sexually objectified and degraded women and were then exposed to material that depicted rape indicated that the rape victim experienced pleasure and ‘got what she wanted.'”

The sentiments expressed in Brave Miss World represent a sea-change for Collins, who appeared in a number of softcore pornographic films in the late '70s – including two based on the books of her younger sister, Jackie Collins. In 1983, at the age of 50, the Emmy-nominated actress posed nude for Playboy.

Now she offers advice to young girls on how to avoid a fate like hers.

“I just want to say to any other girls who are out there – don’t let it happen, don’t go to somebody’s house, don’t let them give you a drink which could possibly be spiked, and get these animals behind bars so they don’t do it again,” she said.

Feminists have derided similar advice as “slut-shaming,” claiming that telling women to avoid being rendered unconscious blames the victim.