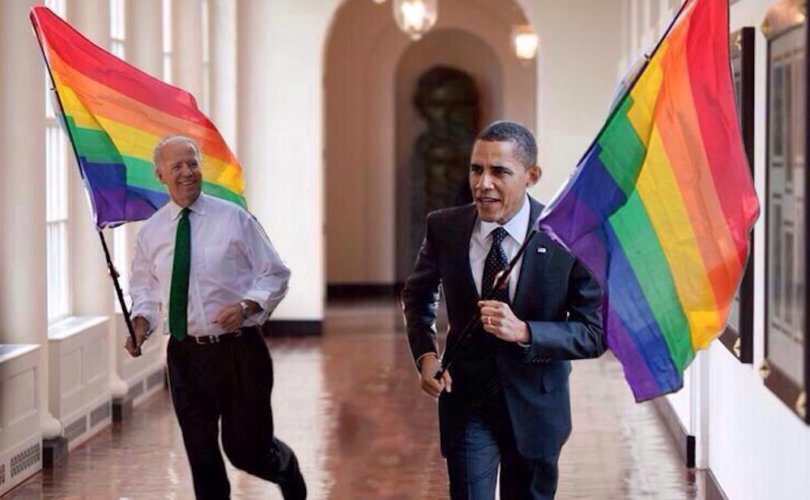 The declaration came during ABC’s Biden town hall Thursday evening, in response to an audience question:

“I’m the proud mom of two girls, 8 and 10. My youngest daughter is transgender,” Mieke Haeck began. “The Trump administration has attacked the rights of transgender people, banning them from military service, weakening non-discrimination protections, and even removing the word transgender from some government websites. How will you, as president, reverse this dangerous and discriminatory agenda and ensure that the lives and rights of LGBTQ people are protected under U.S. law?”

“I will flat out just change the law,” Biden answered. “Every — eliminate those executive orders, number one.”

He then told an alleged story from his youth, about his father explaining to him the sight of two men kissing in Wilmington, Delaware with “It’s simple. They love each other.” Biden has used the anecdote in speeches for years, despite lingering doubts about the plausibility of two men kissing in a crowded public place at a time and place where homosexuality was illegal, or that, as writer Alex Griswold wrote in 2015, “Biden was so touched by his father’s insanely prescient approval of homosexuality… he went on to oppose gay marriage for nearly his entire career, right up to the exact moment public opinion flipped?”

“The idea that an 8-year-old child or a 10-year-old child decides, ‘you know I decided I want to be transgender, that's what I think I'd like to be, it would make my life a lot easier’ – There should be zero discrimination,” Biden continued. I promise you there is no reason to suggest that there should be any right denied your daughter … that your other daughter has a right to be and do. None, zero.”

Despite Biden’s “rights” formulation, society does not generally recognize children’s “right” to judge what medical or psychological treatment is in their own best interests, and most cases of childhood gender confusion resolve themselves unless imposed or reinforced by adults. Further, a wealth of social science literature indicates that indulging a child’s gender confusion, whether surgically or psychologically, is harmful in the long run.

The fallout is even more severe for chemical or surgical “reassignment” procedures, such as puberty-blocking hormones or removal of a child’s breasts or penis. “Each of these procedures has serious negative side effects — up to and including permanent sterilization,” the Family Research Council warns. “Despite claims to the contrary, these procedures are often not reversible.”

Biden also declared that “too many transgender women of color are being murdered.” While few would disagree that any number of murders is “too many,” the “transgender murder epidemic” narrative is based on compilations by activist groups such as the so-called Human Rights Campaign, which does not confirm the victims’ “gender identity” was a motivating factor in every example, and ignores that the transgender murder rate (1.8 per 100,000 as of 2018) is actually lower than America’s overall murder rate (4.9 per 100,000).

Biden, who claims to be Catholic, has endorsed the so-called Equality Act, which would force a wide variety of public and private entities to recognize and accommodate individuals’ claims to be the opposite of their actual sex; and promises to “ensure that LGBTQ+ individuals have full access to all appropriate healthcare treatments and resources,” which “includes covering care related to transitioning — including gender confirmation (sic) surgery.”