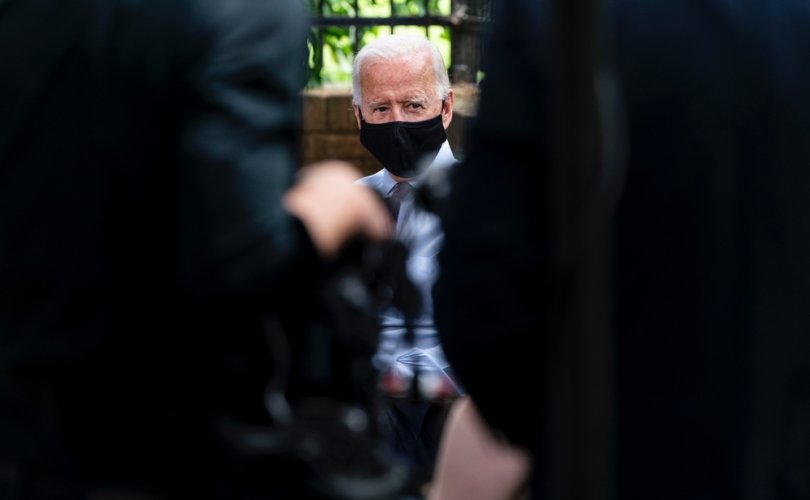 July 1, 2020 (LifeSiteNews) – Democratic presidential candidate Joe Biden has affirmed his support of abortion “under any circumstance.” In the aftermath of the Supreme Court’s decision to strike down a Louisiana law requiring basic medical precautions in the event of abortion complications, he said, “Republicans in state legislatures will stop at nothing to get rid of Roe — and we have to be just as strong in our defense of it.”

According to the former vice president, Republicans “are trying to get these laws appealed to the Supreme Court in the hope that Trump’s justices will vote to overturn Roe v. Wade. It’s wrong. It’s pernicious. And, we have to stop it.” Biden did not clarify why making laws that are then challenged at the Supreme Court would be “pernicious.”

He promised to “codify Roe v. Wade” as president, adding, “my Justice Department will do everything in its power to stop the rash of state laws that so blatantly violate a woman’s protected, constitutional right to choose.”

The Constitution, however, does not mention abortion at all. Roe v. Wade effectively legalized abortion across the United States in 1973, referring to an alleged right to privacy, which also is not explicitly mentioned in the constitution.

Speaking directly about Monday’s Supreme Court decision in the Louisiana case, Biden said, “Women’s health care rights have been under attack as states across the country have passed extreme laws restricting women’s constitutional right to choice under any circumstance. Today, the U.S. Supreme Court reaffirmed that states cannot put in place laws that unduly burden a women’s right to make her own health care decisions with her doctor.”

While Biden seems to be afraid of Supreme Court Justices nominated by President Donald Trump, it is unclear whether they would actually overturn Roe v. Wade.

Conservative commentator and expert on the Supreme Court Daniel Horowitz argued, “The Louisiana case before the Supreme Court, June Medical Services LLC v. Russo, actually demonstrates that Republican-appointed justices, aside from Clarence Thomas and maybe one other, will never overturn even recent expansions of abortion ‘rights,’ much less the foundation of Roe and [Planned Parenthood v.] Casey.”

“The problem is that we don’t have four votes to overturn Roe,” he explained. “Only Thomas once again affirmed that Roe is a complete myth. No other justice joined his dissent. They all wrote dissents focusing on how there should be no standing in this case.”

Horowitz particularly questioned the reliability of Justice Brett Kavanaugh, who was confirmed by the Republican-controlled Senate in 2018.

Regarding the Louisiana abortion case, Kavanaugh “focused on how it wasn’t even clear that the doctors in the case would have been denied admitting privileges if they applied for them. Gorsuch and Kavanagh [sic] joined Alito’s dissent suggesting that this case should be remanded and judged by a different standard, rather than Thomas’ dissent suggesting that this entire case should be thrown out – along with every case predicated on a right to murder.”

“It’s not that these justices are wrong,” Horowitz clarified, “but once again, they refuse to show their cards. It’s not even clear how many of them, aside from Alito and maybe Gorsuch, would overturn Hellerstadt on principle without these technicalities, much less Roe. We don’t know how Kavanagh [sic] would vote in a similar case, especially given his obsession with precedent.”

Meanwhile, Joe Biden is fully on board with the abortion agenda. During a virtual town hall event in April, featuring former Secretary of State Hillary Clinton, Biden focused on the impact of the coronavirus pandemic on women.

“Finally, we need to ensure that women have access to all health services during this crisis,” he said, adding that “abortion is an essential health care service.”

Biden claims to be a practicing Catholic, even though the Catholic Church teaches abortion is wrong under any circumstances. After an American priest followed canon law by refusing to give him the Eucharist last year, Biden said the Pope “gives me Communion,” trying to frame his position on abortion as something with which not even the Pope has a problem.

Biden’s proposed health care plan would enshrine abortion on demand into law, funded by the taxpayer.

Biden has repeatedly indicated in the past that he would “codify” Roe v. Wade in federal law; repeal the Hyde Amendment that bars direct public funding of most abortions; force states to accept Medicare funding for Planned Parenthood; reverse the Mexico City Policy, which bars federal funds from supporting abortion overseas; and direct the Justice Department to “do everything in its power” to block state pro-life laws, including parental notification requirements, ultrasound laws, and waiting periods.