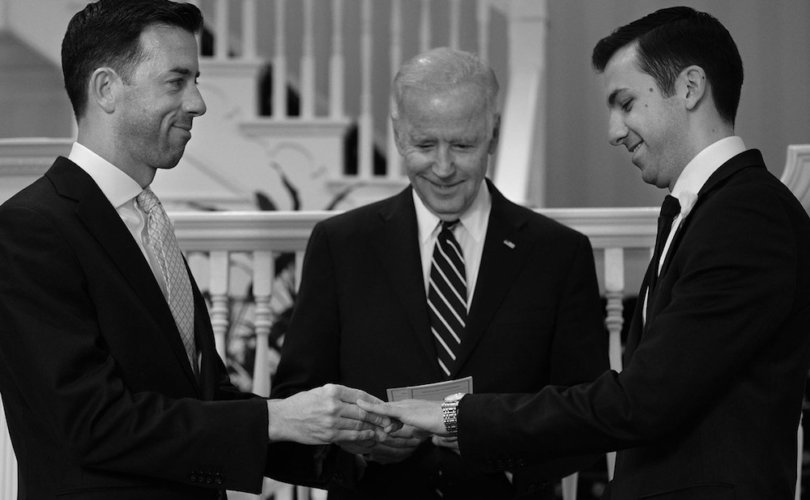 Biden performed the ceremony at 4 p.m. yesterday inside the vice president’s residence, located at the U.S. Naval Observatory.

Biden reportedly obtained a license from the District of Columbia before officiating the service for Brian Mosteller, the director of Oval Office operations, and Joe Mahshie, a trip coordinator for Michelle Obama.

He then tweeted out a picture of the two men holding hands as he looked on approvingly.

Biden announced his support for redefining marriage in May 2012, before Barack Obama officially changed his position on the issue, adding that the TV show “Will and Grace” had done “more to educate the American public” about homosexuality than anything else.

“The situation involving Vice President Biden and his marrying of two homosexuals gives further evidence of the decay that is occurring within the Catholic Church in America,” Judie Brown of the American Life League told LifeSiteNews. “Had the bishops, years ago, enforced church law and made it clear to Mr. Biden, among others, that public defiance of church teaching would result in denial of the reception of Holy Eucharist until such time as the Catholic in question repents of his sins of defiance, we would not today be hearing of outrages such as that exhibited by Biden.”

James A. Smith Sr., vice president of communications at the National Religious Broadcasters, likened Biden’s views on marriage to his stance on abortion:

As a good Catholic, I guess Biden is personally pro-traditional marriage. https://t.co/NxoIawRP9F

Brown remains hopeful the Catholic Church will rein in dissident politicians who flagrantly violate the faith.

“Where is his bishop?” Brown asked.

Joe Biden: ‘Will & Grace’ the turning point in debate over gay ‘marriage,’ rights

Joe Biden: ‘There’s homophobes still left – most of them are running for president’