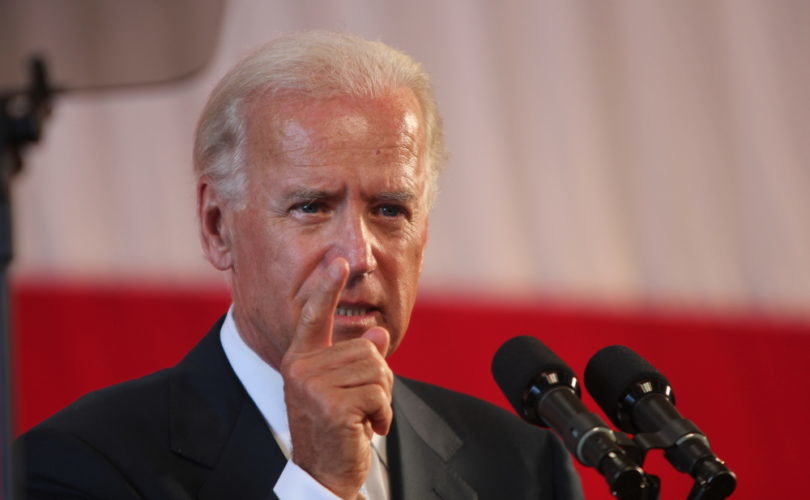 Gays and lesbians should not fear “those shrill voices” working to oppose homosexual “marriage,” Biden said, because Americans “have moved so far beyond them and their appeals to prejudice and fear and homophobia.”

The potential Democrat presidential contender also took the occasion to attack the character of candidates from across the political aisle, stating, “There's homophobes still left – most of them are running for president.”

Biden used his remarks before the annual dinner for the homosexual activist group the Human Rights Campaign (HRC) to advance his support for allowing those suffering from gender dysphoria to serve openly in the military.

“No longer is there any question transgender people are able to serve in the United States military,” Biden said, according to a Huffington Post report.

The White House began to take steps to remove the ban on “transgender” soldiers in the military over the summer, the first stage being a several-month study assessing potential impact on the military's readiness to fight. The change, among other things, would include forcing taxpayers to fund hormone replacement therapy for “transgender” troops.

The administration's push for acceptance of gender ideology in the military has mirrored Obama's policies throughout his time in office.

Biden also told the homosexual activist audience Saturday night that “transgender rights” are “the civil rights issue of our time.”

The vice president and self-identified Catholic has long been a supporter of the homosexual movement, beating fellow Democrats Obama and potential presidential rival Hillary Clinton to the punch in 2012 as the first high-ranking official to endorse homosexual “marriage.”

His outspoken support for both homosexual “marriage” and abortion has drawn criticism from Catholics and others.

Biden was not the homosexual activist group's first choice as keynote speaker for the dinner, according to the report.

Instead, it was Clinton who turned it down once she was booked to appear on “Saturday Night Live” that night. The group also asked Obama to appear, and then invited Biden when Obama was unavailable.