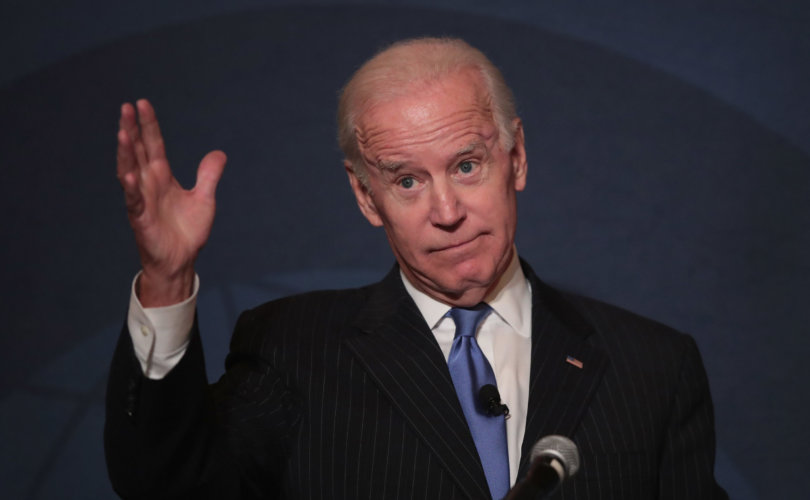 November 21, 2020 (LifeSiteNews) ― Former Vice President Joe Biden used this year’s 37 violent deaths of men and women who say they are members of the opposite sex as an opportunity to advance the transgender agenda.

In an official statement, the leader of the Democratic party stated that 2020 was “the most violent year on record” for “the transgender and gender-conforming communities.”

Biden did not name the victims in his short statement, instead moving the focus towards future legislation that will impose transgenderism on American society to a larger extent than before.

“On Transgender Day of Remembrance, we honor their lives ― and recommit to the work that remains to ensure that every transgender and gender-nonconforming person in America has the opportunity to live authentically, earn a living wage, and be treated with dignity and respect in their communities and workplaces,” Biden wrote.

The pro-abortion Democrat, who described himself in the press release as “President-elect” Joe Biden, stated that there is an “epidemic” of violence against “transgender and gender-nonconforming Americans.”

“As part of our remembrance, we must work to end the epidemic of violence and discrimination against transgender and gender-nonconforming Americans and never repeat it,” he wrote.

Biden, who has been projected to win the presidential election by the mainstream media, addressed transgender people collectively, saying that his administration would fight for them.

“To transgender and gender-nonconforming people across America and around the world: from the moment I am sworn in as president of the United States, know that my administration will see you, listen to you, and fight for not only your safety but also the dignity and justice you have been denied.”

Biden did not provide any examples of justice denied to Americans who claim to be a member of the opposite sex.

It is clear, however, that he is once again signaling support for a worldview in which it is possible to change your sex (but not your sexual orientation), and that the best way to help people with gender confusion is through pharmaceuticals, invasive surgery, and a denial of the biological realities of life.

“Let’s be clear. Transgender equality is the civil rights issue of our time,” Biden tweeted in January 2020. “There is no room for compromise when it comes to basic human rights.”

Biden has also supported a view that children as young as eight who say that they are transgender must be believed. In a town hall event, he told a young mother who said her eight-year-old son who acts as a girl that he would “eliminate” President Trump’s measures against gender ideology.

“I will flat out just change the law,” Biden said. “Every — eliminate those executive orders, number one.”

“There should be zero discrimination,” he continued.

“I promise you there is no reason to suggest that there should be any right denied your daughter … that your other daughter has a right to be and do. None, zero.”

Forbes magazine reported that 350 transgender people were killed worldwide in 2020. The majority occurred in Latin America, predominantly Brazil. Nine of the deaths of transgender Americans occurred in Puerto Rico.

The “Transrespect versus Transphobia Worldwide” organization produced a detailed report listing the killings of this year’s victims.

However, is unclear from the accounts about the American victims that their deaths were the direct result of fear or hatred of people who say they are a member of the opposite sex. One, the suspect in a fatal stabbing, was shot by police. Another person shot by police allegedly pulled a knife on an officer. One victim was killed by a dangerous driver who injured a second person. At least one was killed in a robbery.

The American victims ranged in age from 17 to 43. Most were in their 20s or 30s. As Biden acknowledged, most were Black or Latino. As Biden did not directly acknowledge, most were biological males.

The question of how to help people who do not identify with, or are not comfortable with, their biological sex is a minefield, particularly when perceived “trans rights” conflict with the rights of women and girls to privacy and a safe and equal playing field in women’s sports. Women inmates have been sexually assaulted by “transgender women” in prison.

At the same time, some men and women who have regretted their “transition” to an opposite-sex identity have stated that they were not given the best advice by medical personnel or were processed too rapidly. The sky-rocketing numbers of girls and young women seeking “transition” out of their developing female bodies has been blamed on “social contagion.”

Author and women’s rights advocate J.K. Rowling has suggested that experimental gender surgeries on minors are “a medical scandal.”

Yesterday a court in Florida decided that a ban on professional counseling that discouraged minors from pursuing sex changes was incompatible with the First Amendment of the American Constitution. The court pointed out that Palm Beach County, Florida, and the City of Boca Raton, Florida, explicitly allowed professional counselors to encourage minors to pursue sex changes.

“The ordinances thus codify a particular viewpoint — sexual orientation is immutable, but gender is not — and prohibit the therapists from advancing any other perspective when counseling clients,” two of the judges ruled.

LifeSiteNews has published stories about, and from the point of view of, people who have suffered from gender confusion.