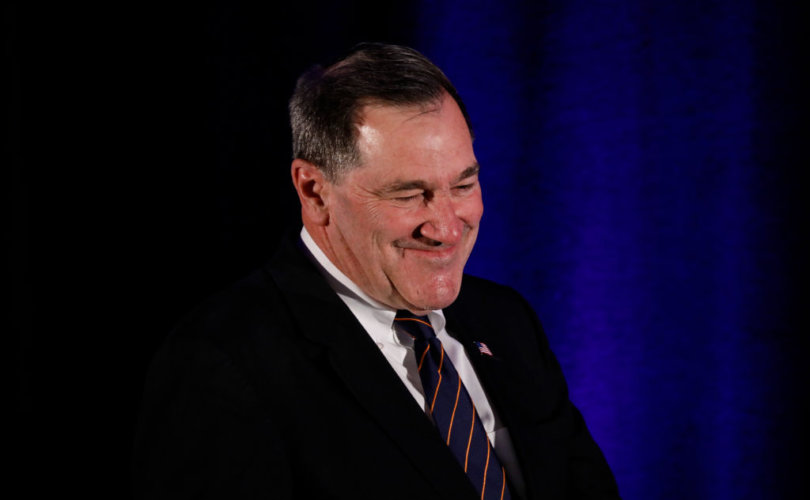 WASHINGTON (LifeSiteNews) — President Joe Biden has selected a former Democratic U.S. senator with a record of supporting abortion, homosexual behavior, and the LGBT agenda, to be his ambassador to the Vatican.

The White House confirmed plans Friday to nominate former Sen. Joe Donnelly, an Indiana Democrat, to the Vatican ambassador position, according to Business Insider. Donnelly said he is looking forward to working with the Vatican on a number of issues regularly highlighted by liberal Catholics.

“If confirmed, I look forward to working with the Holy See on a wide variety of issues, including human rights, religious freedom, immigration, climate change, peace, and poverty,” Donnelly, who is Catholic, said.

Donnelly did not specifically mention issues such as abortion, gender ideology, and homosexual ‘marriage.’ His position on the issues, however, is at odds with what the Catholic Church teaches.

While Donnelly has billed himself as a pro-life Democrat and news outlets announcing his nomination used the term, his voting record looks bad.

The former Senator said he supports “marriage equality,” a term used by LGBT activists to describe same-sex ‘marriage’ as recognized by the government. He also opposed President Donald Trump’s prohibition on “transgender” people serving in the military.

Homosexual activist group Human Rights Campaign “rates Donnelly as siding with them between 80 and 85 percent of the time during his first four years in the Senate,” the Indy Star reported in 2018.

Donnelly also changed his position on same-sex unions, telling the Indiana newspaper in 2018 that he wanted to attract “young people” to the state.

“I think everybody has taken a fresh look at this issue. What I hope the voter realizes is that one of the best things we can do is to try and make everyone feel welcome,” Donnelly said. “I took a long look at this again, and when I did, I said, `You know what? As a state we can’t afford to lose our young people. We want to be a state where we treat everybody equally, where everybody feels welcome.'”

Donnelly has been silent when his own party honored a Planned Parenthood executive in 2017.

Pro-life Susan B. Anthony List criticized Donnelly in 2018 and helped defeat him and elect now-U.S. Senator Mike Braun, a Republican.

“Pro-life Hoosiers cannot trust deceptive Joe Donnelly to stand up for unborn children,” SBA President Marjorie Dannenfelser said in 2018. “Senator Donnelly claims to be pro-life, but he has a history of betrayal on important pro-life votes, including today when he once again voted in support of sending taxpayer dollars to America’s largest abortion business, Planned Parenthood. His record is dramatically out of step with his constituents.”

In the run-up to the 2020 election, Donnelly co-chaired “Catholics for Biden.”