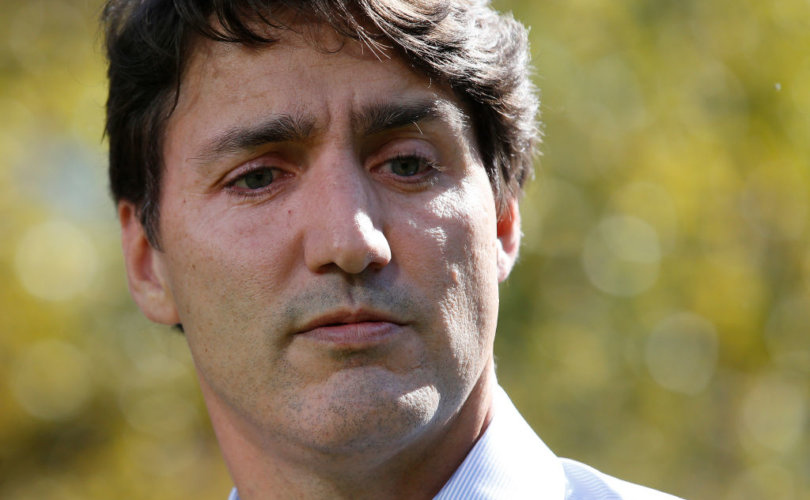 (LifeSiteNews) — In a recent episode of his popular podcast, comedian Joe Rogan took aim at Prime Minister Justin Trudeau, calling him a “dictator” and urging Canadians to “get rid” of him as leader.

“Canada is communist… They gotta get rid of that guy [Trudeau],” Rogan told fellow comedian Tom Segura on a July 14 episode of his “Joe Rogan Experience” podcast.

“I liked him before the pandemic… I was like, ‘He’s a handsome guy, seems sweet, good-looking guy, confident, good talker,’ and then during the pandemic I’m like, ‘Oh, you’re a … dictator!”

Outlining how his opinion of Trudeau changed, Rogan mentioned that earlier this year the prime minister “tried to shut down criticism” by saying that all his “critics are misogynists and racists.”

“The truckers… he called them all misogynists and racists… He’s gross. He’s a sketchy guy,” the comedian concluded.

While Canadian news does not normally command international attention, Trudeau’s treatment of the anti-COVID mandate “Freedom Convoy” earlier this year has led numerous prominent figures, including those on the political left, to take shots at the prime minister.

In February, left-wing comedian Bill Maher likened Trudeau to German dictator Adolf Hitler after the Liberal leader publicly questioned whether Canadian society should continue to “tolerate” those refusing to get COVID jabs.

Another liberal comedian, the U.K.’s Russell Brand, implied Trudeau is a “hypocrite” for condemning Russia’s anti-democratic invasion of Ukraine, as his invocation of the never-before-used Emergencies Act as a way to quash the Freedom Convoy was also an affront to democracy.

“What I feel is that Justin Trudeau lost his authority to comment on issues like this when he treated the truckers in the manner they did when they introduced emergency powers and then did not revoke them. That gave them the ability to freeze people’s bank accounts. That is an assault on democracy,” Brand said in a video posted to his YouTube page on March 12.

“I feel like I saw bits of authoritarianism in Canada when truckers had pepper spray used against them, when bank accounts were frozen, when GoFundMe sites were shut down,” he added.

It is not just famous comedians who are concerned about the actions of the Trudeau government: ordinary Canadians are as well.

As reported by LifeSiteNews, a recent poll shows that over 60 percent of Canadians find Trudeau to be “divisive,” while a whopping 55 percent either “strongly” or “somewhat” disapprove of his leadership.

In comparison to the 32 percent of Canadians who “strongly” disapprove of Trudeau, just 7 percent say they “strongly” approve of him.