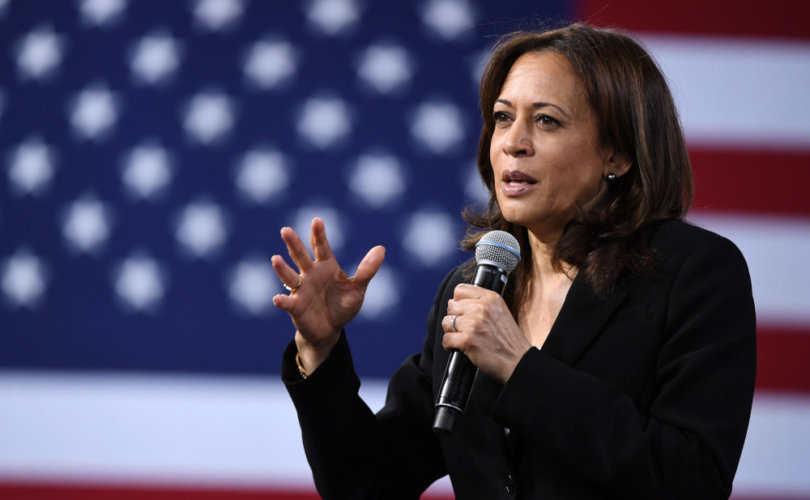 AUSTIN, Texas (LifeSiteNews) — Megastar podcaster Joe Rogan lashed out at Vice President Kamala Harris on Saturday for comparing the riot at the U.S. Capitol on January 6, 2021 to the historic December 7 attack on Pearl Harbor in 1941 that launched America into World War II and the September 11 terrorist attacks in 2001 that sparked the decades-long War on Terror.

In a January 8 podcast episode with guest Adam Curry, an entrepreneur credited with pioneering the medium of podcasting, Rogan quoted Harris’s January 6, 2022 speech in which she described the Capitol riot as an historic and deadly assault on American democracy.

“Certain dates echo throughout history, including dates that instantly remind all who have lived through them — where they were and what they were doing when our democracy came under assault,” Harris said. “Dates that occupy not only a place on our calendars, but a place in our collective memory. December 7th, 1941. September 11th, 2001. And January 6th, 2021.”

While the world’s top podcaster said he felt the events that unfolded on January 6, when participants protested the certification of the 2020 presidential election, were “embarrassing” and “pathetic,” he said it was also “confusing to me.”

“There are parts of it that confused me — the parts where you have these clear agent provocateurs in the audience calling for people to go into the Capitol,” said Rogan, making reference to an allegation that federal officials had instigated violence and encouraged protesters to enter the Capitol building.

To date, the FBI has refused to state whether or not its agents were involved in the events that unfolded that day.

“There’s video of cops opening up barriers,” Rogan continued, asking, “What is that? Why did they do that? Has there ever been an explanation of that?”

Though viral videos recorded during the January 6 disturbance indeed showed people engaging in physical altercations with police, pushing against security barricades, breaking through windows, trespassing in congressional offices, and climbing on walls — activities that temporarily delayed the vote certification and led to the evacuation of lawmakers, other videos appear to show that many protesters were let into the Capitol by police and proceeded to casually walk the halls after the initial breach.

In the podcast interview, Curry noted that some “10,000 hours of footage” of the events of January 6 are still being “held under lock and key,” a fact that skeptics of the “insurrection” narrative suggest throws additional doubt on the legitimacy of the claim that the riot was a planned attempt to violently overthrow the government.

Whether the riot at the Capitol on January 6 was an “insurrection” or merely a protest gone wrong has dominated political conversation since last year, becoming a political hobbyhorse for Democrats who have accused Republicans, particularly former President Donald Trump, of fueling a violent attack upon the very democratic fabric of the nation. Republicans, meanwhile, have largely distanced themselves from the riot, with the vast majority condemning the sometimes violent actions of those involved while arguing that what occurred was nothing more than a violent and lawless protest rather than an attempted coup.

To date, none of the protesters charged in connection with the disturbance at the Capitol have been formally accused of “insurrection,” in spite of the frequent use of the term by media members, government officials, and others.

Conservative commentators, including The Daily Wire’s Matt Walsh, have also pointed out that by comparison, the Black Lives Matter riots of 2020 — in which several dozen people were killed, a federal courthouse was attacked, small businesses were looted and burned, and insurance companies have been faced with billions of dollars in damage while protestors agitated for political change and received the explicit support of Democrat politicians — were a far greater assault on law and order in the United States than the January 6 riot.

And the Democrat Party openly supported all of it

Meanwhile, the Daily Wire noted that Rogan wasn’t the only one to criticize Harris for comparing the January 6 riot — in which the only person killed< was Ashli Babbit, an Air Force Veteran shot by a Capitol police officer — to 9/11, in which roughly 3,000 Americans were killed, and Pearl Harbor, which left 2,400 Americans dead.
Speaking to Fox News’ Sean Hannity on Thursday, Republican Rep. Jim Jordan of Ohio called Harris’ comparison “disgusting,” adding, “This is from the same lady who  who attack[ed] law enforcement in the summer of 2020.”

“That’s how ridiculous and out of touch the Democrats are,” Jordan said.

Despite facing sharp criticism for her comments, Harris has receiving backing from White House Press Secretary Jen Psaki, who encouraged “those who are being critics of the Vice President’s remarks” to stop “focusing on or analyzing comparisons of moments in history,” and instead “be part of solving the threats of democracy that occurs today,” the New York Post reported.