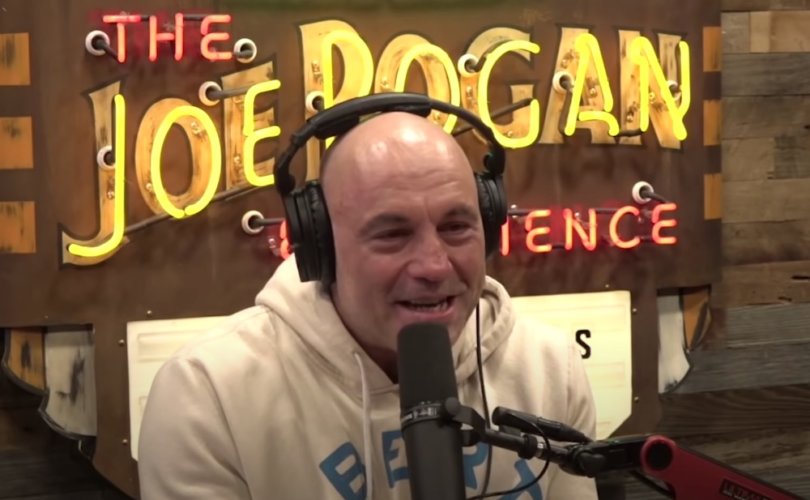 Note from LifeSiteNews President Steve Jalsevac: Joe Rogan has unintentionally created a major problem for the globalist Great Reset with his world record-breaking podcasts with Dr. Peter McCullough, Dr. Malone and Jordan Peterson. The public learned from these incredibly popular, honest guests what the overlords to not want them to know about their evil jabs and plans. As explained below, the most powerful economic forces in the world are threatening him with destruction if he does not comply with their demands to not host guests who expose their exploitation of the COVID virus to impose an anti-God, Communist Chinese type control on what everyone in the world can say and do, buy and sell. They will do this through their vast digital ID vaccine passport system combined with a world government and the end of national sovereignties. This is true. Rogan is in a tough spot, but he must not cave to the global criminals. There will be no benefit from doing that. Rogan needs a giant wave of public support to protect him from groveling to the globalist overlords who will crush all free speech.

(Children’s Health Defense) – Joe Rogan in an Instagram video Monday addressed the growing controversy surrounding his podcast — “The Joe Rogan Experience” — telling fans he’s not interested in talking to people who have only one perspective. He also said he has a problem with the term “misinformation.”

Rogan’s statement came as the streaming platform Spotify on Sunday announced new rules designed to “combat” the spread of COVID “misinformation” on its platform.

The new rules came after a handful of musicians, including Neil Young, Bruce Springsteen’s guitarist Nils Lofgren and Joni Mitchell, pulled their music catalogs from Spotify, in an effort to force Spotify to choose between their music or Rogan’s podcast. Author Brené Brown also joined the protest, stating she won’t release new episodes of her Spotify-exclusive podcasts “until further notice.”

“We have detailed content policies in place and we’ve removed over 20,000 podcast episodes related to covid-19 since the start of the pandemic,” a Spotify spokesperson told The Washington Post in a statement. “We regret Neil’s decision to remove his music from Spotify, but hope to welcome him back soon.”

Saagar Enjeti, Washington correspondent at The Hill, said there could be more going on behind the scenes. Investment firms who own the music catalogs — and who also have ties to pharmaceutical companies — may be calling the shots.

“The people speaking out may be doing so organically, but it also happens to coincide with the financial or oligarchic interests of some very, very rich people,” Enjeti said in a “Breaking Points” episode that took a “deep dive into the hedge funds behind the campaign by Neil Young and others to cancel Rogan and boost other music services such as Amazon music.”

What used to be misinformation, now accepted as fact

According to Rogan’s 10-minute video, his podcast was accused of “spreading dangerous misinformation,” citing specifically his interviews with Dr. Peter McCullough and one with Dr. Robert Malone.”

“Both these people are very highly credentialed, very intelligent, very accomplished people and they have an opinion that’s different than the mainstream narrative. I wanted to hear what their opinion is.

“I had them on and because of that those episodes, in particular, those episodes were labeled as being dangerous, they had dangerous misinformation in them.”

Rogan said the issue he has with the term “misinformation” is that “many of the things we thought of as misinformation just a short while ago are now accepted as fact.”

“For instance, eight months ago if you said if you get vaccinated you can still catch COVID and you can still spread COVID, you would be removed from social media. They would ban you from certain platforms. Now that’s accepted as fact.

If you said, I don’t think cloth masks work, you would be banned on social media. Now that’s openly, repeatedly stated on CNN.

If you said, I think it’s possible that COVID-19 came from a lab, you would be banned from many social media platforms. Now, that’s on the cover as Newsweek.”

Rogan said all of those theories that “at one point in time” were banned, were openly discussed by McCullough and Malone who were accused of spreading dangerous misinformation.

Rogan said he wanted to make the video because he feels “people have a distorted perception” of what he does.

“I’m not trying to promote misinformation,” Rogan said. “I’m not trying to be controversial. I’ve never tried to do anything with this podcast other than just talk to people and have interesting conversations.”

Are Amazon and Hedge Funds trying to cancel Rogan?

In a video posted Jan. 31 on YouTube, Enjeti said there is more than meets the eye when it comes to musicians like Young pulling their catalogs from Spotify.

“The original impetus for Neil Young’s demand was a letter he posted on social media saying Spotify could either have Neil Young or Joe Rogan, but that letter was almost immediately deleted after it was posted,” Enjeti said.

“Who is demanding this? Enjeti asked. “Is it Neil Young or is it the people who own his music?”

“You see a recent trend in the music business it that iconic artists such a Neil Young sell their catalogs to big-money groups who then reap the profits in perpetuity. Young actually sold his catalog in Jan. 2021 to a company called Hipgnosis. Now Hipgnosis is a $1 billion company that recently announced an ownership agreement with Blackstone.”

Enjeti said Blackstone is focused on taking over single-family housing and turning America into a nation of renters, but it also has interests everywhere.

“Blackstone, BlackRock and these big private equity giants are ruthless in their pursuit of profits and they’re savvy political players who know how to play the game,” Enjeti said. “They have all sorts of ties to the pharmaceutical industry, including announcing the former CEO and chairman of Pfizer would be joining Blackstone as a senior advisor.”

“Do you really think it’s a coincidence that days after Neil Young’s music was pulled off of Spotify he debuts a 4-month free trial to any person who wants to sign up for Amazon music — who has struggled to gain market share and has long-standing connections with all of the big money people in the game?” Enjeti asked.

“Open your eyes to see possibilities you may not have imagined,” Enjeti said. “At first it was simple, just Neil Young taking a stand.”

Now a lot of people with big money and a big agenda who would just so happen to profit if Rogan went down are speaking out, Enjeti added. “Joni Mitchell has come out and said she is going to stand in solidarity with Neil Young.”

Lofgren, who on Jan. 30 announced he was joining fellow musicians Mitchell and Young in their Spotify boycott, also does not own his music catalog.

Lofgren’s catalog was purchased on Dec. 16, 2021, by Sony Entertainment. The top 10 owners of Sony Group Corp. are large investment firms.

“You give into the mob, you give them an inch, they will keep coming. Will Spotify really be able to withstand up to the pressure? Who knows? Principles are not going to save you in this instance. Only money will.”

Enjeti said people better hold on to their seats and “hope that Joe prevails on this one,” as he is up against more powerful interests than many realize.

As part of its new rules, Spotify said it would add a content advisory to any podcast episode discussing COVID amid accusations it was allowing misinformation to spread on its platform.

The advisory will direct listeners to a “dedicated COVID-19 Hub,” which is described as a “resource that provides easy access to data-driven facts, up-to-date information as shared by scientists, physicians, academics and public health authorities around the world, as well as links to trusted sources.”

Spotify said this is the first content advisory of its kind and will roll out in the next few days.

The streaming giant also announced it will begin testing ways to highlight its platform rules to raise awareness around “what’s acceptable” and to help creators understand their accountability for the content they post on the platform.

The statement did not say who determines what is and is not misinformation and what is considered a “trusted source.”

Rogan said he supports Spotify putting a disclaimer on controversial podcasts about COVID and encouraging listeners to speak to their physicians.