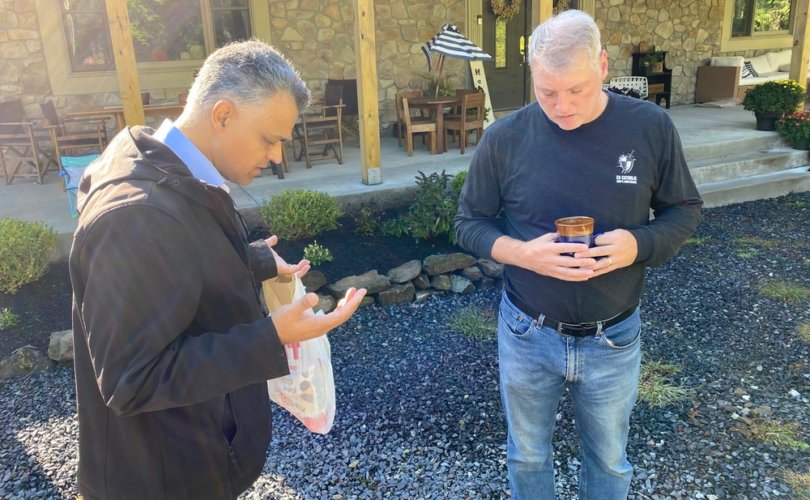 (LifeSiteNews) — LifeSiteNews co-founder John-Henry Westen on Thursday met and prayed with Mark Houck, the pro-life Catholic leader and father of seven who was arrested in front of his family in a traumatizing raid carried out by the Biden administration’s FBI last month.

The raid stemmed from an alleged altercation between Houck and an abortion facility employee outside a downtown Philadelphia Planned Parenthood last year, where Houck, a pro-life sidewalk counselor and the founder and president of men’s ministry The King’s Men, was praying with his 12-year-old son.

On Thursday, LifeSite’s John-Henry Westen traveled to Pennsylvania, where he prayed in front of the Planned Parenthood at which the alleged incident took place, not far from Independence Hall.

Houck and Westen prayed a rosary during their time together, and Houck introduced Westen to his wife Ryan-Marie and their seven small children.

“Glory be to God. What an awesome family. For all that they’ve suffered, I know that that suffering is going to bear a lot of fruit,” he said.

While Westen was with the Houcks at their Pennsylvania home, they walked him through the events of the day on which the FBI arrested Mark.

As Westen recounted based on the family’s retelling, dozens of FBI agents in 15 vehicles arrived in front of the family’s home and began pounding on the front door at around 7:00 a.m. on September 23.

After Houck asked them to identify themselves, and then urged them to “take it easy” because of the small children in the home, the heavily-armed agents entered the home as if they were a SWAT team looking for armed criminals, the family told Westen.

Westen said being in their home he could see the area at the top of the stairs where the Houck family’s terrified children watched as FBI agents stormed into their family’s home with their guns drawn.

“It’s crazy. They’ve got the helmets on, all in bullet-proof vests,” Westen said. “I don’t know what they were expecting. It’s unreal.”

The LifeSite co-founder added that the Houcks are “people of prayer,” and that “prayer surrounds their home.”

“They’ve got images of Our Lord and Our Lady all throughout the house,” he said, noting that the family has received extraordinary support from their large extended family following the raid.

Mark Houck currently faces felony charges that could lead to up to 11 years in prison and fines totaling as much as $350,000.

Prosecutors in the federal case against Houck allege that the pro-life activist violated the Freedom of Access to Clinic Entrances (FACE) Act when he allegedly pushed an abortion clinic employee twice in one day in October 2021.

The FACE Act makes it a felony to use force to intimidate, injure, or obstruct pro-life or pro-abortion protestors or abortion facility workers, or to obstruct or destroy abortion facilities or pro-life pregnancy centers.

Ryan-Marie Houck and the family’s legal representation have contended that the abortion employee was the true aggressor, and had been harassing the family’s then-12-year-old son using vulgar language before Houck pushed him away to protect the boy.

Mark Houck pleaded not guilty to two counts September 27 in a Philadelphia federal court, after being released from custody on September 23 following his arrest that morning.

Houck’s arrest at the hands of the Biden administration’s FBI comes after U.S. President Joe Biden suggested pro-life Christians posed an existential threat to the nation in his now-infamous speech in front of Independence Hall last month.

In recent weeks, the FBI has carried out a series of raids against conservative Americans, up to and including the former president of the United States.

This week, the DOJ hit 11 pro-life activists, including an 87-year-old survivor of a communist concentration camp, with federal charges for a peaceful protest at a Nashville, Tennessee abortion facility.