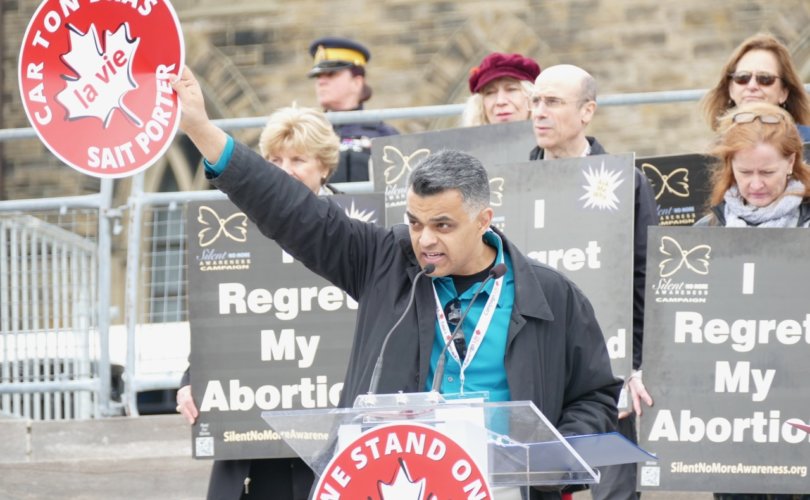 LifeSiteNews Editor-in-Chief John-Henry Westen served as an MC at the 2017 March for Life rally.Pete Baklinski / LifeSiteNews

(LifeSiteNews) — Catholic group “Our Warpath” has put out a press release encouraging the faithful to pray a consecratory prayer ahead of their “March for Catholics” event taking place on September 29 and 30 in Peoria, Illinois.

The event, which takes place at Pere Marquette Hotel and the Saint Mary of the Immaculate Conception Cathedral in Peoria, is set to feature speeches from LifeSiteNews editor-in-chief John-Henry Westen and Catholic Family News managing editor Matt Gaspers on the Thursday, and speeches from Archbishop Carlo Maria Viganò, Fr. James Altman and Doug Barry on the Friday.

Read the full press release below.

Declaration of war: a call to consecration

With the first satanic rebellion came the first glorious response: Who is like God? And throughout the history of the creation this epic primeval war continues battle after battle, century after century, country after country. While the forces of good may simply wish to live in the tranquility of order, the ancient enemy and his legions, restless in their eternal exile, continue to rebel and foment rebellion.

When this rebellion entered the Garden, and disobedience bit the apple in Eden, man’s life on earth became warfare! This war is waged within, this war is waged without; the only constant is that willing or not, the war must be waged. At the gate of Life, the war is waged with the Church thrice exorcizing the devil, throwing down the gauntlet of war at the very fount of Baptism. Slapped at Confirmation, the newly armed soldier is properly prepared for the battles ahead. All this an echo of the Master’s admonition that Heaven will be taken by violence and only the violent—that is those willing to wage a life-long war — will bear it away.

— Article continues below Petition —
PETITION: We won't give any money to liberal bishops who attack the Faith
Show Petition Text
12164 have signed the petition.
Let's get to 12500!
Thank you for signing this petition!
Add your signature:
Show Petition Text

From Gideon to David to the brothers Machabee; from the Coliseum to Crusades to Malta; from Benedict to Bruno to Bernard; brave soldiers of Christ have joyfully answered the clarion call of Christ the King to do violence in this fight for the Divine Order both before and after His coming. This torch of sacred honor and responsibility has now been passed to our generation. The Catholic of today finds himself in one of the greatest crises in history, a fundamental crisis both within the Church where the smoke of Satan has entered and without, where a vast array of eager enemies lie in wait; the fight, the battle, the continuance of The War is now at our very doorstep. With this colossal crisis before us, with the Holy Catholic Church surrounded and assailed, with Catholic doctrine and morals ridiculed and rejected, we, the faithful few by the grace of God, herby reaffirm before the entire world our Baptismal promises, vowing to fight loyally, bravely and joyfully under the standard of our divine King, come what may, counting no cost. We, the faithful few by the grace of God, ask thee St. Joseph, terror of demons and guardian of the Virgin and her Son, to let loose the vast power of your humility and the endurance of your will, that we, your followers and successors as guardians of those two great hearts, may not turn from the heat of battle nor surrender the honor of our quest.

And finally, we, the faithful few by the grace of God, look upon our King’s great Mother as she stands mighty before rank upon rank of Christian souls, ready towage war on all who stand against the burning heart of her Son. Oh Hail Mother and Queen, lead us into battle, strengthen our minds and make steel our wills, for with your mantle of war we shall not stop until every corner of our soul is sacrificed and every horizon and nation is conquered for your Immaculate Heart. Hail Joseph, Hail Virgin, Hail Christ our King. We who are ready to die for you, salute thee, now and forever. Amen.

We ask those who will participate at the March For Catholics to recite this consecration every day leading up to the march, including as well the daily recitation of the fifteen decade rosary.