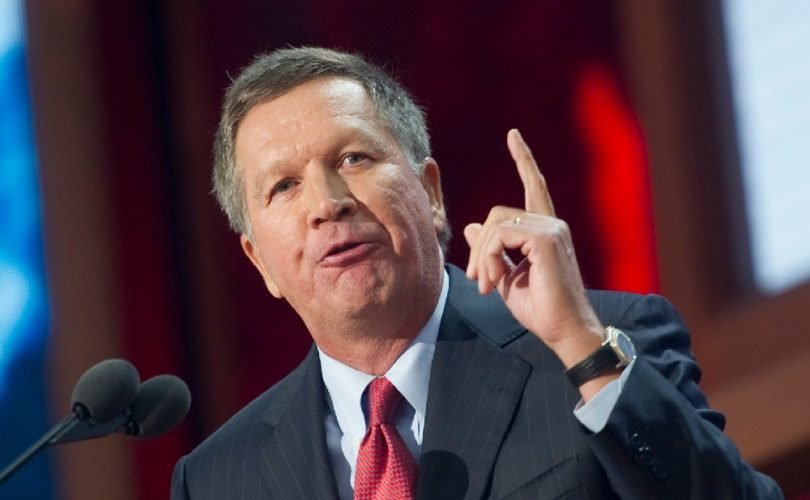 HOUSTON, Texas, February 26, 2016 (LifeSiteNews) – Ohio Governor John Kasich said last night that, while churches and religious institutions should not be forced to conduct same-sex “marriage” ceremonies, Christian business owners should be forced to cater them.

“In regard to same-sex marriage, I don't favor it. I've always favored traditional marriage, but, look, the court has ruled and I've moved on,” he said during CNN's debate in Houston.

He portrayed the notion of not participating in ceremonies that violate an entrepreneur's deeply held religious beliefs as a slippery slope.

“I mean, if you're in the business of commerce, conduct commerce. That's my view,” he continued. “If you don't agree with their lifestyle, say a prayer for them when they leave and hope they change their behavior.”

His answer to the question, posed by radio host Hugh Hewitt, contrasted with those of his rivals, including Donald Trump, who responded in the affirmative when asked if he would make religious liberty for business owners an “absolutely litmus test” for all judicial nominees.

In a Republican debate in Cleveland last August, Kasich said, “Guess what? I just went to a wedding of a friend of mine who happens to be gay.”

After a surprisingly strong second place finish in New Hampshire, Kasich has steadily scored near the bottom of the field in South Carolina and Nevada. He paused between the last two contests to sign a bill depriving Planned Parenthood of $1.3 million in taxpayer funds. But he has apparently conceded his presidential fortunes will remain about the same until his home state of Ohio votes. On Fox News last night, he said “no one is likely to win except Donald Trump” on Super Tuesday.

Kasich's second presidential campaign is being managed by John Weaver, a Republican and sometimes Democratic political operative who has attacked Christian conservatives.