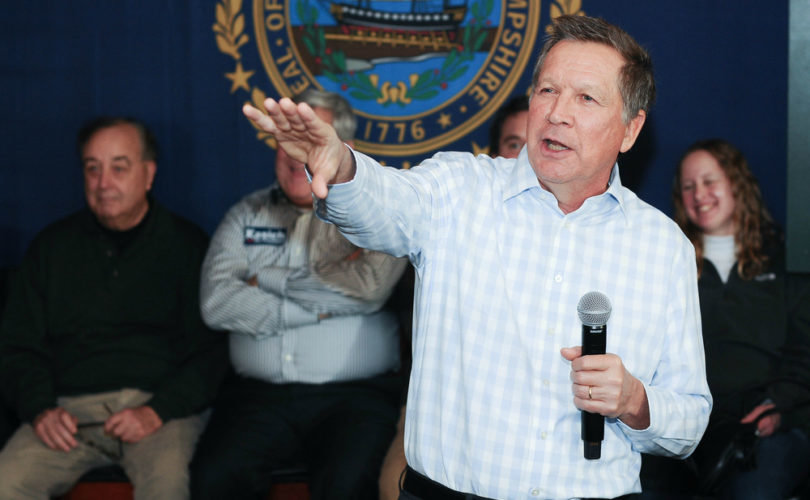 The new law, H.B. 294, denies an estimated $1.3 million in taxpayer fundingstate health funding to any organization that provides elective abortions.

Those funds will instead be redirected to approximately 150 other community health providers that do not engage in abortion.

“We mark this week as the week the State of Ohio left the abortion industry,” said Mike Gonidakis, president of Ohio Right to Life.

“Planned Parenthood and other abortionists have other sources of income – including from ending the lives of unborn children – and do not merit government funds,” added Paula Westwood, the executive director of Right to Life of Greater Cincinnati.

Kasich told CNN last week that he strongly supports government funding of women's health care and made it a priority to assure that low income “women have a place to go.”

“We just can't operate through that organization anymore” he said of Planned Parenthood. “It's lost credibility.”

Planned Parenthood and the state's Democratic Party denounced the loss of funds.

Planned Parenthood CEO Cecile Richards said the bill was “devastating.” The Ohio Democratic Party said in an official statement, With his decision today to sign House Bill 294, Governor Kasich has finally answered the question of whose side he’s really on.”

But national pro-life groups said legislators were within their rights to reprioritize state spending to less controversial organizations.

“Ohio’s new law terminates funding for Planned Parenthood and other abortion businesses, freeing up money for more widely available and more comprehensive low-cost health care options for women and families in the state,” said Alliance Defending Freedom Senior Counsel Casey Mattox, who testified before the state House on behalf of the bill. “Taxpayer dollars should not go to organizations with a long track record of abusive and potentially fraudulent billing practices, that have been caught in authenticated undercover videos negotiating prices for baby body parts, and that have repeatedly failed to report the sexual abuse of girls.”

According to Ohio Right to Life, the law is the seventeenth piece of pro-life legislation signed by Governor Kasich in the last five years. Other pro-life measures include Ohio's Late-Term Abortion Ban, a bill requiring abortionists have admitting privileges at local hospitals, the Heartbeat Informed Consent Act, and funding for life-affirming pregnancy centers. The group reports that, since Governor Kasich took office in 2011 following pro-abortion Democrat Ted Strickland, abortions in Ohio have decreased 25 percent, and half of Ohio's abortion facilities have closed or stopped performing surgical abortions.

“On behalf of our statewide membership, Ohio Right to Life thanks Governor Kasich and the Ohio General Assembly for the enactment of this historic legislation,” Gonidakis said. “Without their compassion, our taxpayer dollars would continue to enable the decimation of thousands of unborn lives.”

But Westwood says this is only the beginning. “Work will now continue to remove all such funding to abortion providers, including Medicaid reimbursements,” she said.

Kasich, who is not known for his focus on social issues, is campaigning for president in Virginia today.