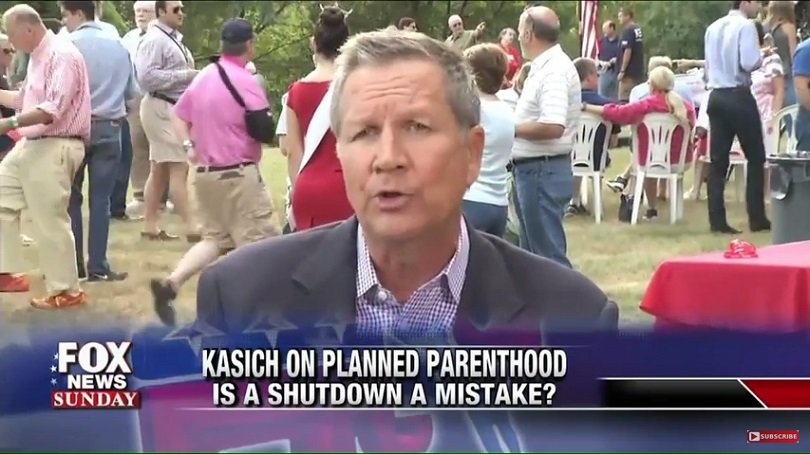 Gov. Kasich, who has compiled a pro-life record as governor of a swing state, said he wants to defund the nation's leading abortion provider but believes a government shutdown would be counterproductive to Republican fortunes.

“Well, first of all, I think Planned Parenthood ought to be defunded, no question about it,” he told Chris Wallace yesterday on Fox News Sunday. “We're doing everything we can in Ohio to figure out how to get that done.”

“I feel very strongly about being able to defund Planned Parenthood, and a lot of other things. But, if you're not going to be successful, then you have to be careful to think about other ways to achieve your objective,” Kasich said of the national scene.

When asked about his own, proud role in the 1995 national government shutdown with the Clinton administration, Kasich said the situations could not be compared.

“We really suspected that if we did fight” in 1995, “we could actually move a balanced budget forward.”

“I think in this case, the president's made it clear he's not going to sign” any bill that defunds Planned Parenthood. White House spokesman Josh Earnest indicated this summer that, should such a budget pass the Democrat-controlled Senate with the necessary 60-vote margin, President Obama would veto it.

It is doubtful if the Senate has 60 votes necessary for cloture, much less two-thirds of the chamber necessary to override a presidential veto.

“They need to be more creative in regard to Planned Parenthood,” Kasich said.

His words echo those of Republican leaders in both the House and the Senate, both of whom have been outspoken in saying that they would avoid a government shutdown at all costs and that such a stand-off would be bad for the pro-life cause.

Mitch McConnell had said that he had the support of pro-life “groups who deeply are concerned about the issue.”

They “realize this [Planned Parenthood strategy] isn’t going to” succeed, he said, offering instead to advance a vote on the Pain Capable Unborn Child Protection Act.

President Obama has also promised to veto that bill.

McConnell said defunding Planned Parenthood will have to wait for a pro-life president to be elected in 2016.

Chuck Donovan of the Charlotte Lozier Institute, a pro-life think tank, wrote in National Review that a recent spate of undercover investigative videos have so darkened Planned Parenthood's reputation that it is time to force a national showdown.

“Defunding is a fight worth having, and reaching the summit is possible, but only if we do not shrink from the challenge,” he said.

Sen. Rand Paul made a similar point at a pro-life event last week entitled “Women Betrayed” hosted by Students for Life of America in Washington, D.C.

“I think the country is coming in our direction,” he said. “What we need is leadership in Washington.”

Dozens of congressmen have signed a letter saying they will not vote to fund Planned Parenthood, no matter what the consequences.

Others speakers at last week's event made it clear that patience is wearing thin and pressure is building in both houses of Congress against the present strategy. Congresswoman Diane Black said, “We don't want a government shutdown. We just want to shut down Planned Parenthood.”

Black, who wrote a bill to defund the abortion provider entirely, for one year, said she is glad the group is being investigated by two House committees for possible felony offenses, but “an investigation is not a solution. We have a responsibility to stop the money flow to this lawless” organization.

But current Congressional strategy has not delivered, speakers said. Rep. Tim Huelskamp of Kansas added, “We had one of our leaders in the Republican conference – I won't tell you who he is – had voted 25 years to defund Planned Parenthood.”

“Now Mr. Speaker, isn't it time to do it a little differently?”