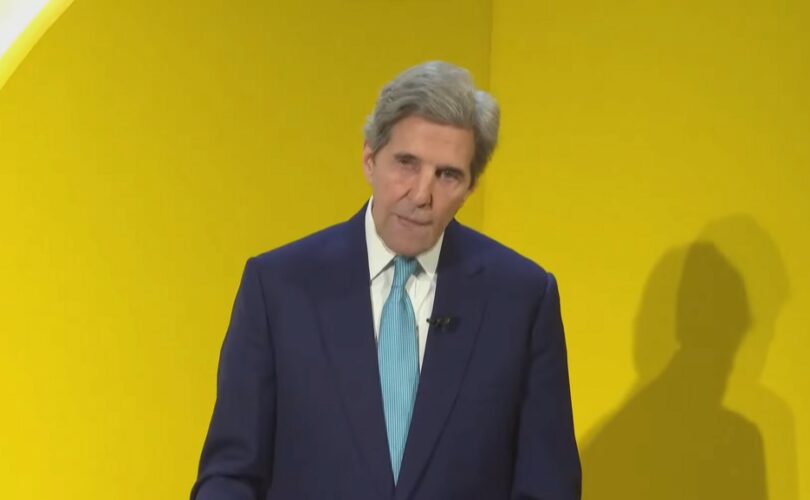 DAVOS, Switzerland (LifeSiteNews) — U.S. Special Envoy for Climate John Kerry spoke at the World Economic Forum meetings in Davos yesterday where he praised himself and those in attendance for being part of the “select group of human beings” that “actually talk about saving the planet.”

The former secretary of state under President Barack Obama and U.S senator praised everyone in attendance for their work to try to lower the global temperature through massive government interventions.

John Kerry at the WEF. pic.twitter.com/SFntAPsU2E

“When you stop and think about it it’s pretty extraordinary that we select group of human being, because of whatever touched us at some point in our lives are able to sit in a room and come together and actually talk about saving the planet,” Kerry said.

He said that corporations should be pushed to get involved, perhaps in reference to the woke “Environmental, Social, and Governance standards” adopted by massive investment companies such as BlackRock and Vanguard.

“We have to find a way to to get really serious about bringing the corporate world on board around the world,” Kerry said.

He specifically praised Mark Carney, a United Nations (UN) climate and finance envoy, who supports “zero-carbon” initiatives. “The dialogue has shifted from viewing climate change as a risk, to seeing the opportunity, and really translating that into a single objective, which is to move our economies to net zero as quickly as possible,” Carney said in undated interview on the U.N. website.

“We know we have a limited carbon budget. On some measures we only have 10 years left at current emissions rates before we have blown through 1.5 degrees of warming and moved to more catastrophic levels,” Carney previously said. “So we need to preserve and extend that budget as much as possible. Carbon offsets help do that.”

Kerry said that people have to be brought together to take the “first loss” and create “bankable deals” on climate change.

“We have to do this day to day and and bring the private sector to the table. We have to unleash, Mark Carney knows this as well as anybody, we have to unleash the trillions of dollars for bankable deals,” the climate envoy said as he wrapped up his speech. “How do you create the bankable deals? You have to leverage, you have to bring people together just to take first loss.”

Kerry, under President Obama, was on the team that negotiated the Paris Accords which demanded that successful, wealthy countries drastically cut back emissions in order to “save the climate.” It was never voted on in the U.S. Senate as an official treaty. President Donald Trump pulled the country out of the accords, but the U.S. has rejoined the agreement under the Biden administration.