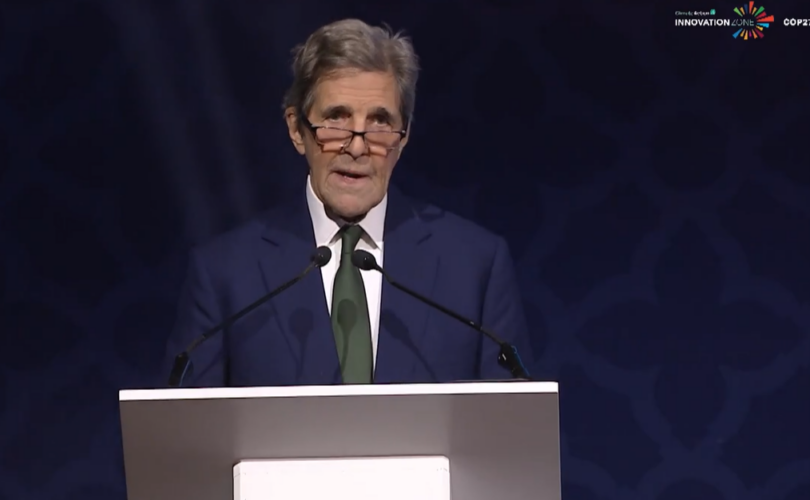 COP27 is an annual climate change conference held by the UN and features organizations such as the WEF as well as statesmen and businessmen from governments and corporations.

Appearing alongside WEF president Børge Brende and various corporate executives, U.S. Special Presidential Envoy for Climate John Kerry urged the private sector to merge with the public sector in order to stop an allegedly catastrophic climate disaster that he believes is coming.

In his speech, he said, “We have an enormous challenge before us to bring to scale new technologies and to harness the deeply capable capacity of private sector entrepreneurs in order to bring them to the table because without it, no government has enough money … we need everybody behind this.”

The First Movers Coalition is the result of a partnership between the U.S. State Department and the WEF, and was established before last year’s COP26 conference.

The essence of the endeavor is to lure big companies into committing to “green” initiatives by attaching loads of public funding in order to take away the risk of losing any money on behalf of the corporation.

Kerry told the attendees at the panel that the initiative sought seeks to harness the same infrastructure that rolled out COVID jabs where collaboration between corporations and the state was commonplace.

The WEF-U.S. State Department initiative is convinced that rising global temperatures will cause international deaths to rise.

However, this is in contradiction to the most up to date research.

Last year, climate science expert Bjorn Lomborg noted that nearly half a million people died from “storms, floods, droughts, wildfires and extreme temperatures” per year a century ago while in 2020 just 14,000 died in similar events.

“That’s almost 99% less than the death toll a century ago,” he wrote. “The global population has quadrupled since then, so this is an even bigger drop than it looks.”

Despite the fact that the scientific statements proposed by Kerry and the First Movers Coalition are proven false, Kerry said “President Biden is more determined than ever to continue” with the radical green agenda.