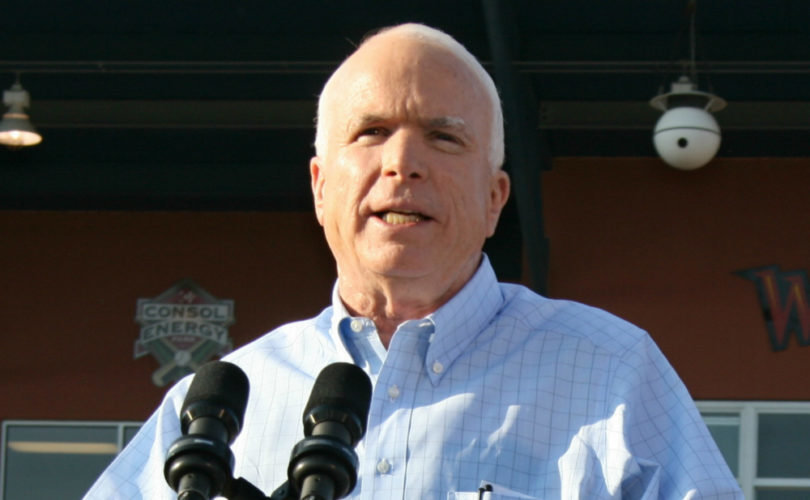 PHOENIX, AZ, January 19, 2016 (LifeSiteNews) – The Republican Party in the largest county in Arizona will not endorse John McCain, in part because he said he would be willing to vote to fund Planned Parenthood.

The Maricopa County Republican Party endorsed “anybody but McCain” on Saturday by a vote of 921-to-582.

County Chairman Tyler Bowler said “many activists” expressed their view that “Senator McCain’s recent vote to increase the national debt to more than $20 trillion, while fully funding Planned Parenthood, was a clear message that he is more inclined to choose President Obama and Harry Reid over the will of the Arizona voters in order to retain his D.C. Establishment power.” McCain has voted to raise the debt ceiling about half of the times the option has come before the Senate.

The latest electoral blow comes as McCain seeks his sixth, six-year term to the U.S. Senate.

After the Center for Medical Progress released undercover footage showing national figures in the abortion industry haggling over the prices of aborted babies' body parts, Sen. McCain became an original co-sponsor of a bill to defund Planned Parenthood. “The appalling footage that has been released over the last several weeks has made it abundantly clear that taxpayers should not be forced to pay for such disturbing activities,” he said last July. “It is long past time we stop sending American tax dollars to this scandal-plagued group and start doing more to protect the health and well-being of women, mothers, and their families.”

However, McCain initially said he would vote for the $1.1 trillion omnibus spending bill, which included full federal funding for Planned Parenthood, late last year. “I will not vote to shut down the government,” he said. “I’ve seen that movie before and what it did to Arizona’s…the people of Arizona.”

Ultimately, McCain voted against the omnibus bill – not because it funded the abortion industry, but in his words, “because it gives tens of millions of dollars to Vladimir Putin and his cronies.”

He also voted as part of the Senate's razor-thin majority supporting a reconciliation bill that would defund Planned Parenthood, the nation's leading abortion provider. President Obama vetoed that bill.

McCain has other, long-standing issues with his party's social conservatives. In his first race for president in 2000, he named pro-abortion Republican Warren Rudman as his campaign chairman. The same year, he branded Pat Robertson and the late Jerry Falwell as “agents of intolerance,” likening them to the Nation of Islam.

During his most recent term in the Senate, McCain supported taxpayer funding of abortions for women in the military who conceived by rape.

In 2013, McCain also broke a campaign promise by voting for the Employment Non-Discrimination Act (ENDA), which grants homosexuals privileged status in the workplace.

Many Arizonans were outraged that, after campaigning for re-election in 2010 on a vow to “complete the danged fence,” McCain has continued to champion “comprehensive immigration reform,” which includes amnesty for millions of illegal immigrants.

“The ‘Anyone But McCain’ sentiment expressed by the grassroots Republicans perfectly mirrors the dissatisfaction of the millions of everyday Arizonans who are tired of an out-of-control federal government,” Bowler said.

The news comes as McCain faces the strongest primary challenge he has encountered to date, from Tea Party-aligned conservative Kelli Ward. Channeling the voters and legislators who have endorsed her, she accused McCain of being “more critical of [conservative Republican Ted] Cruz than he has been of Obama.”

Ward gave a rousing six-minute-long speech to the Maricopa GOP meeting on Saturday, mentioning a plethora of issues where she disagreed with the 2008 presidential candidate, especially immigration and federal spending.

A poll taken over the summer showed Ward leading McCain by nine points.