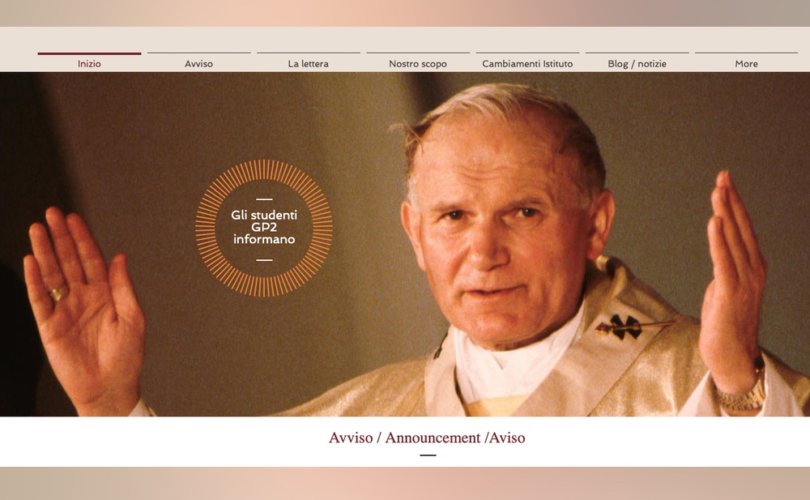 ROME, Italy, August 2, 2019 (LifeSiteNews) ― Students at the John Paul II Pontifical Theological Institute are using a blog to voice their objections to the changes sweeping their beloved school. The Pontifical Institute for Studies on Marriage and Family was renamed and re-purposed by Pope Francis in 2017. The changes include new statues, the firing of key professors, and the elimination of courses that are strongly tied to the legacy of John Paul II.

The website is called “Gli studenti GP 2 informano” (“The students of the Giovanni Paolo 2 shall inform”) and carries both their letter of protest and an invitation for readers to sign it. So far the students have collected 647 signatures, 434 of them from students or former students of the Institute.

The students founded their blog as a response to the Institute’s July 29 press release, which they believe fell short of answering their concerns. The institute largely downplayed the student's concerns in the press release.

“The purpose of this blog is, first of all, to spread and make public the letter sent on July 25 (dated July 24) to the dean of the Institute, Mons. Pierangelo Sequeri, given that the “Press Release” published on the official website of the Institute on Monday, July 29, not only does […] not respond to our well-founded questions and fears, but completely ignores the requests that we explicitly make and that seek to safeguard our rights as students: the continuity of our studies for those of us who have entered with the old Ordinance,” they wrote.

“Secondly, we want to inform and keep updated the students and former students of the Pontifical Theological Institute Giovanni Paolo II about the events that are happening (and their development) in the Institute after the unexpected publication of the new Statutes and the new Ordination of Studies on Tuesday, July 22, 2019,” they added.

“It is also addressed to all those who, aware of the wealth that the teachings provided by the [John Paul II] Institute means to the Church and the world, want to help protect it.”

Among the changes to the Institute was the temporary suspension of the entire faculty and the dismissal of seven key professors, including the former president of the Institute, Monsignor Livio Melina. The new statutes give the Grand Chancellor of the Institute, currently Archbishop Vincenzo Paglia, the right to fire and hire faculty.

'You don’t have the right!'

Ante Vrhovac, who enrolled as a doctoral student at the Institute after completing its licentiate program, attested on the blog to the frustration he feels, having already chosen courses in June for the 2019-2020 academic year. The then-new study guide, which was published both on paper and online, included courses by both Monsignor Melina and Father Noriega.

When Vrhovac discovered that both professors had been dismissed, he contacted the Institute to find out how he could continue his doctorate under the old study program, which is his right under Article 89 of the new statutes.

“Thus I ask myself, in what sense do we talk about the right to continue for those who wish to continue with the old program if some of the professors chosen by us for our studies are no longer part of the Institute?”

Vrhovac believes that the press release was a “lie beautifully wrapped for those interested in the future of the Institute.”

”The government of the Institute has assured us all about our rights, but when they receive concrete questions they say that they haven’t received these questions (as with our letter) or they don’t answer (the questions presented in the letter haven’t received answers) or they answer that in reality the old system can’t be literally maintained for us who want it (as in my case of the seminars chosen for next year),” he wrote.

The doctoral student extolled both Melina and Noriega, who had had a profound effect on him, and declared that the Institute had no right to remove them.

“You cannot take from us the fathers, the teachers, the parents of our hearts! You don’t have the right,” he stated.

“With the firing of Monsignor Melina and Fr. Noriega … I have implicitly received the message: ‘Dear Ante, that which you wished to find in your future studies by choosing these two professors you shouldn’t search for anymore. This teaching doesn’t belong anymore to the Institute’s reality.”

Vrhovac concluded that he did not want the Institute without “this teaching, without these teachers, without a clear proclamation of the Truth of Love.”

In contrast to the student’s impassioned announcement, Fr. Antonio Spadaro, S.J. tweeted a message today advising that the public take no interest in what he says is a “vendetta” within the Institute.

“The strategy is in fact obvious: to frame the expected renewal of the [JP II Institute] as a purge of ‘orthodoxy’ by the ‘modernists’. This nonsense is just a form of internal revenge. Forget about it,” wrote the consultant to the Vatican’s Secretariat for Communications.

Meanwhile, Fr. Ricardo Mensuali, the spokesman for Archbishop Vincenzo Paglia, the Grand Chancellor of the Institute, has stated that the school would not be answering questions regarding the new changes.

Writing for the UK’s Catholic Herald, Christopher Altieri reported today that Mensuali explained that “this unavailability is momentary because we want to be absolutely serious” when they do answer the questions.

Altieri noted that the Institute’s July 29 press release had stated that “The press office is always available for clarifications and information.”

“On Tuesday and Wednesday, phone calls and emails to the institute’s press officer went unanswered, while officials at the Academy for Life promised answers that never came,” the journalist added.