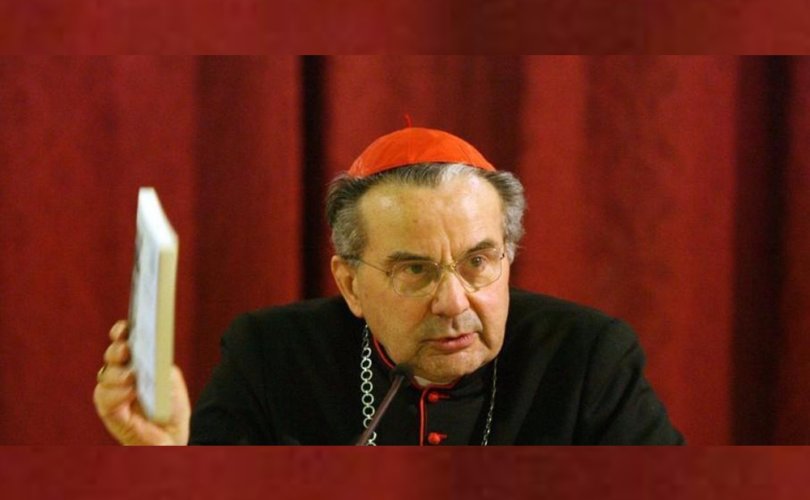 September 19, 2017 (LifeSiteNews) — One year prior to his death, Cardinal Carlo Caffarra gave a talk at the John Paul II Institute in Washington D.C. where he outlined why the institute was created, what its “DNA” is, and the grave danger the institute must fight against of separating “pastoral practice from the doctrine of the faith.”

With Pope Francis now replacing the John Paul II Institute for Studies on Marriage and the Family with an institute focused on implementing his controversial exhortation Amoris Laetitia, it seems appropriate to publish in full Caffarra’s 2016 address.

MUST READ: Did the Pope just answer the dubia by abolishing the John Paul II Institute?

The Cardinal was tasked by John Paul II in 1980 to found the Institute. He is one of the four dubia signers. He passed away earlier this month.

Caffarra mentions in his talk that the institute was assigned the “specific task” of “reflection” on Pope Paul VI’s 1968 encyclical Humanae Vitae.

The encyclical taught that “each and every marriage act must remain open to the transmission of human life,” calling the use of contraception (including the pill, condom, withdrawal, and other methods) “intrinsically wrong.”

“This is the great theme of the truth about human procreation,” the Cardinal said in his address.

The encyclical celebrates its 50th anniversary next year.

Catholic theologians including Josef Seifert and Father George Woodall have outlined how Amoris Laetitia can be used to overturn Catholic teaching against contraception.

Caffarra warned in his address about the “serious dangers that the Church must guard against in her commitment to proclaiming the Gospel is the separation of pastoral practice from the doctrine of the faith.”

“The alternative to a Church with doctrine is not a more pastoral Church, but an arbitrary Church enslaved to the spirit of the age: praxis sine theoria coecus in via, the Medieval scholars used to say: ‘Practice without theory is a blind man on the road,’” he said.