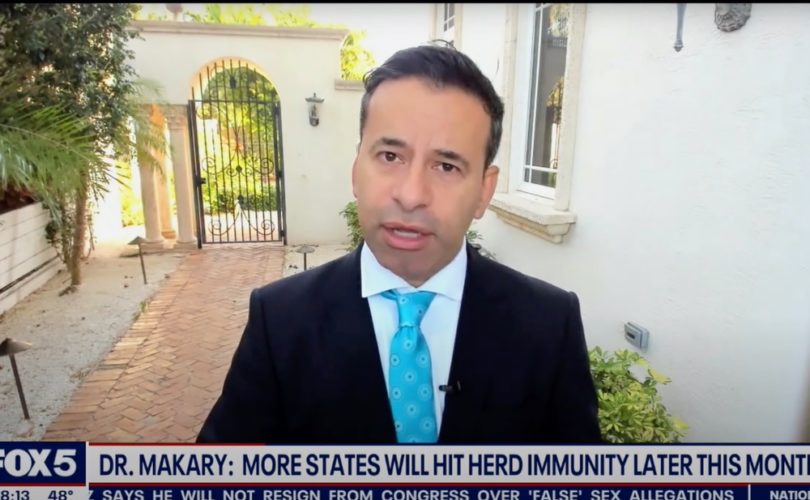 June 1, 2021 (LifeSiteNews) – A Johns Hopkins School of Medicine professor blasted the U.S. Centers for Disease Control and Prevention (CDC) for ignoring crucial data on natural immunity from COVID-19, saying that “probably half the country has natural immunity from prior infection. This is the most slow, reactionary, political CDC in American history.”

Dr. Marty Makary, also a professor at the Bloomberg School of Public Health, made the remarks during an interview on the Vince Coglianese Show, where he excoriated public health officials for denying the reality of a natural immunity to COVID-19, acquired through natural infection.

Makary explained that the CDC’s numbers on those who have contracted a COVID-19 infection are artificially low, giving a false impression of the spread of the virus and the herd immunity that has already arisen therefrom.

Referencing the roughly 30 million COVID infections cited on the CDC’s dedicated COVID-tracker webpage, Makary said “those are just the people who are confirmed to have had the infection. It’s probably five times higher, about 150 million people.”

Makary spoke positively of the broad spread of the virus in relation to immunity: “When you get natural immunity from a severe COVID infection, you have natural immunity that’s probably lifelong.”

Various studies have shown this to be the case, Makary noted, paying attention to data from Denmark, where only “six-tenths of one percent of people who had COVID ever get the infection a second time.” “And that’s when they’re around it (COVID) all the time, that’s in healthcare workers,” he added.

“Studies out of California prove that and show 38 percent of Californians had antibodies back in March before the vaccine was really kicking off. About half the country has natural immunity.”

Makary voiced dismay at CDC and White House officials who routinely push for near-universal vaccination in spite of the data on natural immunity. In fact, governing bodies are guilty of “demonizing” people who decide not to get vaccinated, even when they have recovered from a COVID infection and have the antibodies, forming a natural immunity.

So incensed was the professor by the intellectual negligence displayed by public health officials that he actively discouraged recourse to their advice on COVID-related matters: “I never thought I'd say this, but please ignore the CDC guidance.”

“One of the biggest failures of our current medical leadership is ignoring natural immunity,” he said. “They’ve given out no guidance to those who’ve had the infection, they just tell them to get the vaccine as if they don’t already have antibodies and they demonize them when they’re hesitant.”

He added that the medical establishment “don’t know what to do with those who already had the infection,” leading them to simply suggest taking one of the experimental vaccines.

But the vaccines themselves are no guarantee of protection against the very virus they were created to shield from. In addition to myriad health problems arising from the currently experimental COVID vaccines, including life-threatening blood clots, the jabs have not proved adequate in preventing infection after being “fully vaccinated.”

Reports in April confirmed almost 6,000 so-called “breakthrough cases” of COVID-19 in the United States – that is, contraction of the virus two weeks after receiving a full vaccine regimen – 74 of whom died.

In fact, as more breakthrough cases were beginning to be reported, the CDC made the decision to alter how it tests and records COVID infection in vaccinated individuals, raising the COVID test-positive bar higher than that of tests from unvaccinated individuals. The CDC also announced that it would stop reporting weekly COVID breakthrough infections unless they result in hospitalization or death, subsequently suppressing the figures.

Although breakthrough cases continue to rise, Makary suggested that taking just one shot of a two-shot-recommended vaccine is sufficient for protection against COVID-19. He did note, however, that “when you get the second dose it can knock you down,” and that “getting the infection is like getting a dose.”

The medical doctor soon turned his attention to destigmatizing the decision not to vaccinate, saying that such a choice should be considered “reasonable too,” especially given that “we have fewer daily COVID cases now than we have daily flu cases in a mild flu year.”

“We've got to start respecting people who choose not to get the vaccine instead of demonizing them,” he said.

Makary blamed the Biden administration, as well as the CDC, for misleading the nation regarding the need for high vaccine uptake, thus hindering the perceived progress toward herd immunity. “They ignore natural immunity which changes the path to herd immunity,” he said.

“When you ignore the fact that half of the unvaccinated have natural immunity, the path to get to 85 percent immunity in the population is much more difficult, it’s much more dire. If you ignore natural immunity, the only way to get to 85 percent population immunity is to have mandates for the vaccine, and require kids to get them, and convert those who are hesitant, and demonize them. That is why you are hearing a totally different story from public health officials who ignore natural immunity.”

“Right now in America, 62 percent of all adults have been vaccinated and half of the unvaccinated have natural immunity. That means 80 to 85 percent of adults in America today have immunity. The virus can’t jump around … when 8.5 out of 10 people are protected, they’re barriered.”

“That’s called herd immunity and we are there.”

“This is the most slow, reactionary, political CDC in American history. They’re taking talking points from the WH and it’s a disgrace,” he said.

On account of the neglect of natural immunity, Makary said the government has effectively “prolonged the pandemic,” prompting him to encourage Americans who are “unvaccinated and have not had the infection … to be careful and evaluate your own individual risk.” Otherwise, “please ignore the CDC. Live a normal life.”