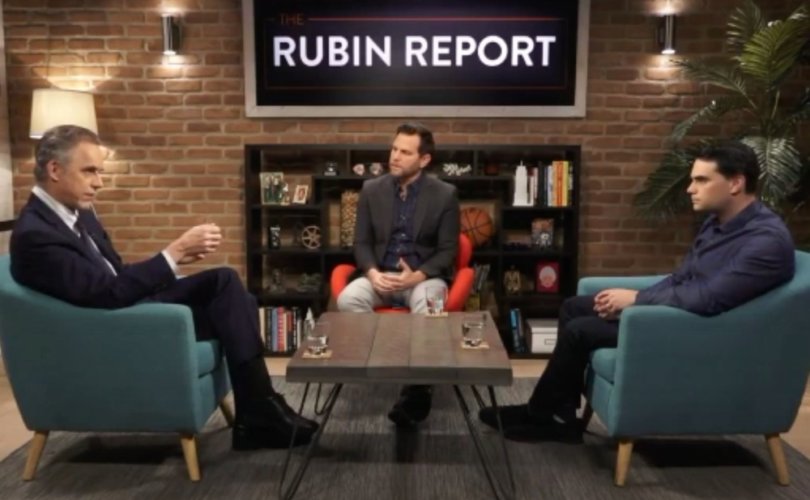 Rubin of the Rubin Report was hosting Peterson of the University of Toronto and Shapiro, editor-in-chief of the Daily Wire. Both are internationally recognized intellectual mega-stars who champion free speech, reason, and common sense. Rubin said that all three of them should be grateful that their opponents had sharpened them intellectually, given them influence in the public square, and brought them together.

The live show, streamed over Youtube, was upbeat, with Rubin gleefully predicting a huge audience.

“We are going to crack the internet today,” he said, “because I am sitting between two people who I think are really at the forefront of what I think is an ideas revolution on Planet Earth.”

It was an accurate prophecy, for the live feed cut out 6 minutes 40 seconds into the show, and was restored only after a long pause. The show had over 245,000 views within 20 hours.

Rubin indicated that people are turning to both of his guests for answers in the intellectual chaos that has ensued “post-Trump.” Rubin said that Peterson's profile had “exploded” in recent weeks. Shapiro agreed that Peterson is “the man of the hour.”

The theme of the show was the growing fellowship, or “crew” of intellectuals coming together in an “ideas revolution” against the “identity politics” offered by postmodern philosophy. Reason-based thinkers like Peterson and Shapiro are advocating for “meaning” based on “purpose” and “personal responsibility” over grievance politics.

“What I‘m hoping is happening,” said Peterson, “is that we’re beginning to elucidate the fundamental problems of identity politics. Like the real errors in it… Because I think [postmodernists] are wrong…. That the path they are choosing is improper.”

He continued, “I think we know enough now to subvert the fundamental postmodern claims.”

Among these claims is that objective truth does not exist: there are only “narratives” that advance the power and well-being of one group over another.

After the guests reflected on the “flashpoints”  that had made them famous — Shapiro’s televised “shellacking” of Piers Morgan, Peterson’s interview with Cathy Newman, and Rubin’s discussions with Sam Harris about Islam — they examined how left-wing media tries, but ultimately fails, to misrepresent its ideological opponents as villains.

“They’re trying to impose their [order] on the chaos, ” Shapiro suggested, “but [using] the wrong frame.”

Shapiro and Peterson agreed that conversation is a kind of journey, but that the mainstream media isn’t interested in a journey. Shapiro said it wanted to go from the beginning to an end of “the movie” at once. Rubin suggested that thoughtful speakers who insist on a “journey” are “a glitch” in the mainstream media system. By refusing to be wrongfooted by interviewer Cathy Newman, Rubin said, Peterson had created a “glitch” in her.

Among other newsmakers the media get wrong is Google ex-staffer James Damore, whom they paint, Rubin said, “as a tech bro.” In reality, Damore is quiet and thoughtful, but with, in Peterson’s words, “a spine of steel.”

Damore was fired from Google in 2017 for circulating an internal memo he wrote suggesting that there were benign reasons why gender parity does not exist in technological fields. His employers were horrified by his assertion that there were biological and psychological differences between women and men.

Nevertheless, Rubin asked if they all didn’t owe Social Justice Warriors thanks for forcing their opponents to come out and become part of the ideas revolution

“In a weird way, do we owe the postmodernists some thanks, then? Because if you think about it, they forced someone like Lindsay [Shepherd] to be public now,” he said “…. All of these people, you guys, me, James Damore.  I mean, he only is someone now with influence because they forced him to address these issues. So in an odd way, we owe them. We owe them because they’ve sharpened us intellectually, but I think they’ve allowed all these other people to wake up.”

Peterson, a Canadian, is both a professor and a clinical psychologist. He is the author of the current bestseller 12 Rules for Life: An Antidote to Chaos and an internet sensation.  Peterson’s Youtube channel, “Jordan Peterson Videos,” carries over 300 of his lectures, has 702,000 subscribers, and has had over 30 million views.

A fierce opponent of totalitarianism of any kind, the 55-year-old professor rose to fame last year after refusing to follow laws enforcing the use of genderless pronoun preferred by transgender activists. The psychologist argued that policing language is the first step towards totalitarianism. Peterson was a leading critic of a Canadian bill (C-16) which added “gender expression” and “gender identity” to Canada’s Human Rights Code and to the hate crimes section of the Criminal Code.

Shapiro, an American, is a lawyer, conservative journalist and author of various bestselling books, including Bullies: How the Left’s Culture of Fear and Intimidation Silences America (2012) and Brainwashed: How Universities Indoctrinate America’s Youth  (2004). At age 17, he became the youngest nationally syndicated columnist in the USA. He is also the host of the top-ranked podcast “The Ben Shapiro Show.”

Shapiro is a noted defender of preborn children. Numerous videos of him out-arguing abortion activists in front of college audiences have gone viral on Youtube and Facebook.

Like Peterson, a critic of the far-left stranglehold on the academy, Shapiro, 34, has worked to loosen its grip through cross-country speeches and debates. He is a frequent guest on college campuses throughout the USA.  He has been frequently targeted for protests by the far-left, including violent Antifa activists.

The two men also have Harvard University in common: Shapiro graduated from Harvard Law School in 2007, whereas Peterson did research and taught in Harvard’s psychology department as an assistant professor and then an associate professor from 1993 to 1998.