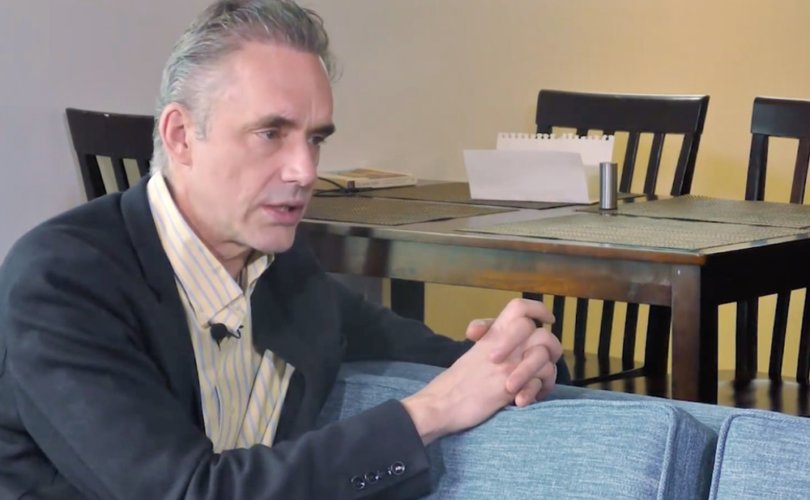 February 13, 2018 (LifeSiteNews) – Does he or doesn't he believe the central tenet of Christianity, that Jesus Christ rose from the dead two thousand years ago?

That’s what many Christians wonder about Canada’s most influential counter-revolutionary intellectual, Jordan Peterson. Despite his fascination–as a psychologist–with the Bible, it’s hard to get Peterson to articulate his beliefs in the supernatural.

Catholic talk-show host, and former host of “Catholic Answers Live,” Patrick Coffin made an attempt last week to have Peterson answer this very question during a February 5 interview.

Coffin asked, “In light of your affirmation of the archetypal significance of the Resurrection, you have expressed some ambivalence about its historical reality… Where are you in this discernment process on the historical nature of Christ, and especially [of] the Resurrection?”

Peterson began answering the question by addressing the relationship between metaphorical and literal truth and between the spiritual and the material realms.

“I do believe that there are places where the mythological and the literal touch,” Peterson replied. “I mentioned one of those earlier: the idea that spoken truth, Logos, creates habitable order out of chaos. I think that is literally and metaphorically true. I don’t think you can state the nature of Being, and the role that consciousness plays in it, more accurately than that.”

Peterson stated that when the spiritual and material touch, “that’s a miracle when that happens, and I do think that happens.”

However, the professor is not ready to assert belief or disbelief in the historical Resurrection of Jesus Christ from the dead.

“I need to think about that for about three more years before I would even venture an answer beyond what I’ve already given,” he told Coffin.

Peterson, whose moral code involves the strictest possible adherence to telling the truth, said that this reticence is because “there is very much there that I don't understand as well as I need to understand.”

“I want to spend the same amount of energy on the Christian Passion as I have on those other lectures [on the Scriptures] to investigate exactly this sort of thing because I know there’s way more to that story that is available for analysis that I don’t understand.”

He stated that he understood the story of the Resurrection symbolically, but didn’t “know enough about it to say anything more than what I’ve said psychologically, and so I want to know more about it,” he said, with emphasis.

Peterson excitedly returned to the topic of the Resurrection later in the interview when he stated that it wasn’t “obvious” what the Gospels meant by the Resurrection. “It’s not like its a straightforward story,” he said.

“You know, Christ comes back, but people don’t  really recognize Him. And He’s sort of got His old body, but not quite because He’s not recognizable. And then He appears to a lot of people, but then the circumstances of what happens next are far from clear. So there’s this weird mingling in the Gospels themselves of the psychological and the symbolic and the literal…I mean people have argued about what that story means within the Christian camp for two thousand years.”

Peterson revealed that his reluctance to answer questions about his own spiritual beliefs is rooted in distrust for interviewers’ motives because they are “not straightforward by any stretch of the imagination.” He usually wonders what his interviewer means by asking a question about the Resurrection, and why he or she is asking it.

“It’s the same thing that happens when people say, ‘Well, do you believe in God?’” he told Coffin.

“First of all, I don’t respond well to that question. It’s kind of like asking what you do in the bedroom…. . It’s manipulative as well… I don’t like the question, and I don’t like to answer questions I can’t feel solid about in my answer.”

He said that the first of his two “fundamental” answers to the question of his belief in God is “What the hell business is it of yours … ? You just don’t get to know that, and you certainly don’t get to know it in a one sentence answer.” The second answer is “I have this course, “Maps of Meaning”, and I lecture about that question for 40 hours, so the answer to that question is 40 hours long. I can’t condense it into a sentence; it’s not condensible. The 40 hours is already a condensing.”

Peterson revealed a light-hearted attitude towards organized religion when the Catholic Coffin asked him to finish the sentence “Patrick, right now I’m not a Catholic because….”

Chuckling, Peterson said it was because he had his own church, the Church of Saint Joachim of Fiore which he set up on the internet six years ago in response to a friend’s request that Peterson officiate at his wedding. (The professor thought an officiant should have a church.) Peterson made it clear both that he is the only member of his made-up religion but also the “metropolitan” of his church because he thought that “would be very amusing.”

In response to Coffin’s earlier observation that it was difficult to put Peterson in a conceptual “box,” the professor said he also found it difficult.

“I have a hard time figuring out what kind of box to put me in, too, because I don’t know exactly what’s going on around me or why. But I need to stay outside of boxes because then I can look at what’s inside of them without being part of them,” he said. “I like to recede away from classifications. You might say that indicates a fundamental lack of commitment. I suppose that’s true to some degree. But true or not, that’s the circumstance that I’m in at the moment.”

“I’m the Jack-in-the-box,” he later concluded.

Peterson responded positively to the idea of church-going, seeing in it “utility,” a sense of community and a “sense of shared moral aspiration.”

“I think it’s a real catastrophe that [church-going] doesn’t work for so many people now, including me,” he said.