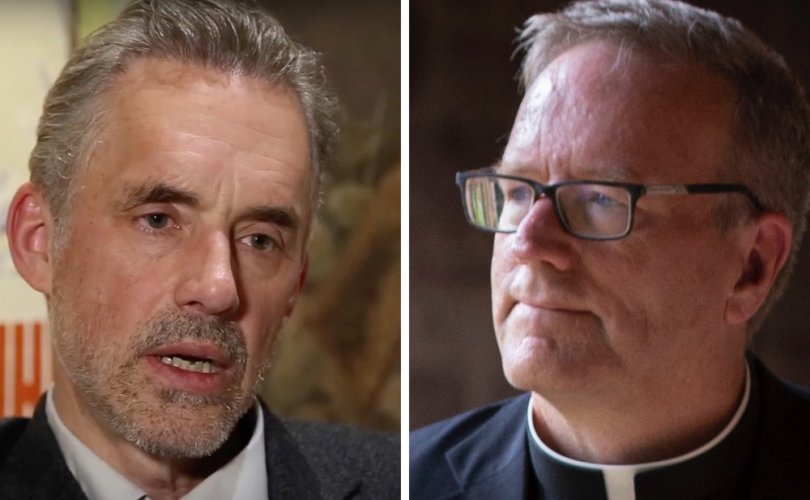 July 18, 2019 (LifeSiteNews) – World-famous psychologist Jordan Peterson told U.S. Bishop Robert Barron that a church that emphasizes mercy and forgiveness while not requiring people to turn away from their evil ways is a church that does not really “care” about people.

“If you really love someone, you can’t tolerate when they are less than they could be,” Peterson said in a conversation with Barron that was broadcast on Peterson’s YouTube channel July 13 (watch the full 1.5-hour conversation here).

The comments were made when Bishop Barron, founder of Word on Fire Catholic Ministries and Auxiliary Bishop of the Archdiocese of Los Angeles, was telling Peterson about the “grace of God” being “not just mercy, and not just justice: It’s the two arms of it.”

“I think that's what we've been missing a lot in the Church, is the two arms,” the bishop said, adding: “We’ve become just too much of a ‘mercy’ Church, in a way.”

Responded Peterson: “Yeah, I know, that’s what I think. I don’t think you guys ask enough of your people. You’re not giving them hell.”

While Barron responded that he thinks there is “something right about that,” he went on to quote Pope Francis’ teachings of “accompaniment” and the Church being a “field hospital” for people who are deeply wounded.

“We have to accompany people all the way down [to the bottom before they can ascend],” Barron said.

Pope Francis has emphasized in his teachings on “mercy” and “accompaniment” that people can live Christian lives that are pleasing to God while not following the laws of God or the perennial teachings of the Church regarding marriage and sexuality.

In his 2016 Apostolic Exhortation Amoris Laetitia, the Pope indicated that God actively wills people, in certain situations — such as in the case of an “irregular” couple where an already married man lives with a woman to whom he is not married — to commit acts contrary to the “demands of the Gospel.”

Conscience can recognize, stated Pope Francis, “with sincerity and honesty what for now is the most generous response which can be given to God, and come to see with a certain moral security that it is what God himself is asking amid the concrete complexity of one’s limits, while yet not fully the objective ideal” (303).

The Pope’s teachings on this matter have been used by “progressive” priests, bishops, and cardinals to advance the normalization within the Catholic Church of so-called second marriages without an annulment (adultery), homosexuality, cohabitation, and other sinful practices contrary to Catholic moral teaching. Following the example of Christ to whom was brought the woman caught committing adultery, the Church has always taught that receiving God’s mercy and forgiveness means also following His command given to the woman after she was forgiven, namely, “go and sin no more” (John 8:1-11).

Peterson told Barron in the interview that real love can be a “terrible thing” because “if you love your children, you don’t let them get away with anything. You call them on their transgressions.”

The professor related how he once caught his son lying to him and how he held him to account for the wrong.

“There was something that's not right here,” Peterson related. “And I wasn't going to let him get away with it because I couldn't let him learn that it was acceptable to do that, or that I would put up with it. So, I went after him, you know, for a long while. And, it did turn out that he was telling me something that wasn't true,” he added.

Peterson said that he held his son to account for the transgression, even though it really “hurt,” because “if you really love someone, you can’t tolerate when they’re less than they could be.”

“And so when someone comes into the Church, and it's all forgiveness, there’s no care there. It's like [the Church should be saying]: ‘What the hell are you doing? Look at you. You're addicted. You're hooked on pornography. You cheat on your wife. You're doing a terrible job at work. You don’t take care of yourself. What the hell’s wrong with you? Where’s the real you?’”

Peterson said that anyone who is subject to that kind of assessment, “as long as it’s done with care, and not with [the attitude], ‘I’m better than you’” can be helped to be made better.

“‘Man, you’re nothing like you should be,’” Peterson said is more of the approach that needs to be taken by spiritual leaders today.

The professor said later in the conversation with Barron that what's required to really help people today is a “reemphasis on the potential nobility of the human being and the moral responsibility to make that nobility a reality.”

Barron pointed out that people today are “so concerned about people's feelings and about feelings getting hurt” that they’re “afraid if we use that language of a ‘noble’ aspiration” that calls people to something better and higher.

Peterson agreed, adding that “we're afraid of hurting people's feelings in the present and willing to absolutely sacrifice their well-being in the future.”

“That's the sign of a very immature and unwise culture, because the reverse should be the case,” he said.

When trying to help someone who is making poor choices, the “initial conversation when you lay things bare and you put everything out on the table and you discuss what the problems are and maybe the potential solutions… man, that's a rough conversation,” said Peterson. “It’s almost more than people can bear.”

“But, if it's a discussion of reality, well, they're already bearing it. And, at least them placing it on the table indicates that there's someone who's willing to listen, and it isn't so terrible that […] it can’t be named,” he added.

Earlier this year, Peterson told Dennis Prager, a conservative Jew, that Catholicism is “as sane as people can get.” When asked about his dislike for the question of whether he believes in God, Peterson said he has “never been comfortable saying anything other than ‘I try to act as if God exists because God only knows what you'd be if you truly believed.’”