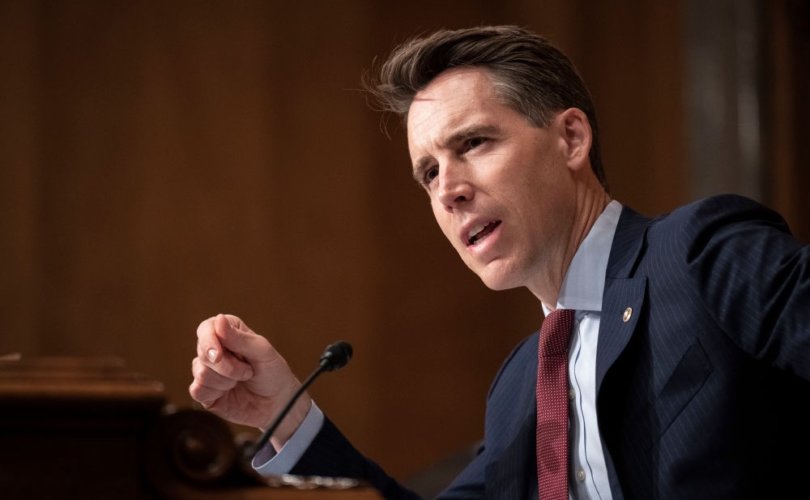 This article has been updated to include Monday statements from the FBI to Fox News.

“I want to know from Merrick Garland directly why Biden’s DOJ is arresting Catholic protestors like terrorists – complete with SWAT-style tactics – while letting actual terrorist acts like firebombings go unpunished,” Hawley said in a Monday tweet in which he attached copies of his letter to the DOJ.

In the letter, Hawley told U.S. Attorney General Merrick Garland that he has “a lot to answer for” after sending as many as 25 armed federal agents to arrest pro-life author and speaker Mark Houck for “allegedly committing a single count of simple assault by pushing a man near an abortion clinic.”

— Article continues below Petition —
Stand with Mark Houck, a pro-life Catholic dad of 7 raided by Joe Biden's FBI
Show Petition Text
8433 have signed the petition.
Let's get to 9000!
Thank you for signing this petition!
Add your signature:
Show Petition Text

According to Houck’s family, Houck pushed an abortion facility employee who was verbally harassing his 12-year-old son using vulgar language, causing him to fall down. The family says Houck shoved the man away to protect the child.

LifeSiteNews broke the now-viral story of the raid on Friday.

Houck’s wife Ryan-Marie, a homeschooling mother of the family’s seven children, told LifeSite that the Catholic family was terrified Friday morning when FBI agents surrounded the house and “started pounding on the door and yelling for us to open it.”

“[T]hey had big, huge rifles pointed at Mark and pointed at me and kind of pointed throughout the house,” Ryan-Marie described. “The kids were all just screaming. It was all just very scary and traumatic.”

In his Monday letter to Garland, Hawley pointed out that the original criminal complaint against Houck had already been tossed out well before the raid.

The senator contended that in addition to turning “a local dispute into a national case,” FBI agents “reportedly executed the search warrant in as extreme a manner as one can imagine.”

Below is the first page of the warrant issued for the FBI SWAT raid of Catholic pro-life speaker, author and sidewalk councilor, Mike Houck. pic.twitter.com/XeVLhbxAYI

“To say the least, using this kind of force to make an arrest for a single charge of simple assault is unprecedented,” Hawley said, adding that the news “is especially shocking” given the agency’s apparent double-standard when dealing with pro-abortion violence targeting pro-life ministries.

“[Y]our office has so far turned a blind eye to the epidemic of violence across the country by pro-abortion extremists against pregnancy resource centers, houses of worship, and pro-life Americans – violent acts that are prohibited by the very same law under which you are charging Mark Houck.”

The FBI warrant served against Houck was obtained by federal authorities under the Freedom of Access to Clinic Entrances (FACE) Act, which prohibits intimidation, physical obstruction, and destruction of both abortion centers and pregnancy centers.

LifeSiteNews reported that as of September 15, the FBI had not made any arrests in its investigation of the attacks on pro-life centers and churches following the leaked Supreme Court opinion and the overturning of Roe v. Wade.

In his Monday letter, Hawley also slammed the Biden-appointed attorney general for “repeatedly weaponizing the FBI” against the administration’s “political opponents.”

“If you are trying to inspire confidence in your department, you are failing magnificently,” he said.

Hawley concluded the letter by calling for Garland to “testify, under oath, before the Senate Judiciary Committee about your selective use and apparent political weaponization of the FACE Act.”

The Missouri senator also demanded that Garland explain why as many as 25 FBI agents were sent, guns drawn, to Houck’s home. Further, he requested that Garland state “how many charges” the DOJ has brought since May 3, 2022, “against pro-abortion extremists who have attacked pregnancy resource centers, churches, and pro-life Americans”.

In a statement to Fox News Digital on Monday, a spokesperson with the Philadelphia office of the FBI affirmed that the armed agents went to Houck’s home, but said that they were not SWAT members. A senior FBI source also put the number of FBI agents at 15-20, denying there were as many as 25. The source also confirmed that the agents had their guns out, but argued they didn’t aim the weapons at Houck or his family members.

The viral report of the FBI’s raid on the pro-life Catholic speaker comes as the agency has repeatedly executed FBI raids against  Biden administration’s political adversaries in recent weeks.

The escalations come amid U.S. President Joe Biden’s increasingly belligerent rhetoric against so-called “MAGA Republicans,” in which he has characterized pro-lifers, Trump supporters, conservative Christians, and medical freedom advocates as threats “to the very foundations of our republic.”

In his now-infamous September 1 “Soul of the Nation” speech, Biden accused “MAGA forces,” of attempting “to take this country backwards — backwards to an America where there is no right to choose, no right to privacy, no right to contraception, no right to marry who you love.”

Flanked by U.S. Marines and standing against a blood-red backdrop just weeks after the FBI executed its raid against Biden’s predecessor and top political adversary, the president argued that conservatives “fan the flames of political violence that are a threat to our personal rights, to the pursuit of justice, to the rule of law, to the very soul of this country.”