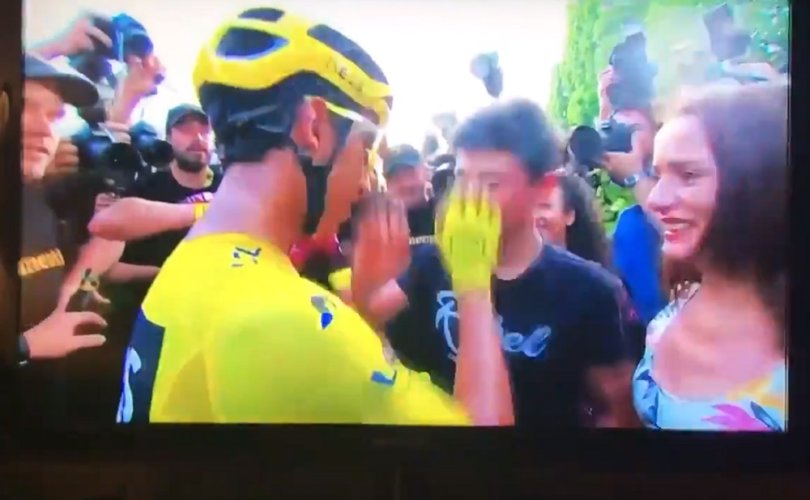 July 29, 2019 (LifeSiteNews) — The youngest cyclist to win the Tour de France celebrated the feat by performing the sign of the cross with his younger brother.

Twenty-two-year-old Egan Bernal, also the first Colombian to win the race, hugged his little brother and kissed him, and the two offered each other the sign of the cross before Bernal then kissed his brother again.

The poignant moment was captured on video and shared on social media after the finish of the prestigious 2,200-mile, 23-day race Sunday at Paris’s Champs-Elysées.

“It’s incredible, I don’t know what to say,” Bernal said. “I’ve won the Tour but I don’t manage to believe it. I need a couple of days to assimilate all this. It’s for my family and I just want to hug them. It’s a feeling of happiness that I don’t know how to describe it.”

The young champion cyclist went on to say the victory was also for his home country of Colombia, a Tour de France report said.

“This is not only my triumph,” Bernal said. “It’s the triumph of a whole country.”

Remarkable moment. Egan Bernal just became the youngest Tour de France winner ever. He hugs and kisses his little brother and then they offer each other the Sign of the Cross. Stunning moment. pic.twitter.com/TyXMzPBV8L

He shared his happiness with his girlfriend Xiomara, his mother Flor, his father German and his younger brother Ronald in what the Tour de France report described as “a touching moment live on TV worldwide.”

Bernal is known for being polite and grateful, the Tour de France report said, and did not neglect to thank the two other countries that had a hand in his becoming a champion: France for organizing the event and Italy, where he’s now based for his European campaigns.

The grace displayed by Bernal after his historic Tour de France win stood in marked contrast to the prideful and profanity-laced behavior exhibited by some members of the U.S. women’s soccer team following its Women’s World Cup win earlier this month.