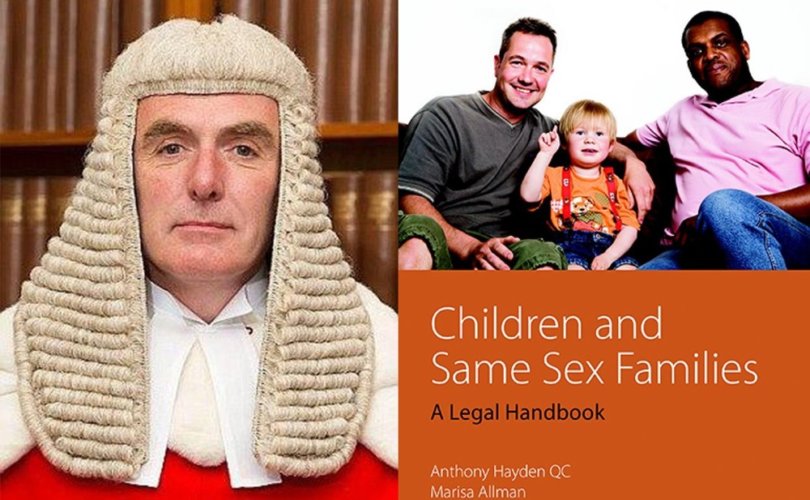 ENGLAND, April 24, 2018 (LifeSiteNews) – Justice Anthony Hayden, the judge at the center of the Alfie Evans case, is a member of The Bar Lesbian and Gay Group (BLAGG) and co-authored a book on homosexual relationships and their pertinence to children’s rights.

A post on the website of BLAGG – a British association that supports “lesbians, gay men, bisexuals and transgender persons at all levels” of the legal profession – names Hayden as a member.

The post is titled BLAGG Member appointed to High Court Wednesday, 31 July 2013 and remains on BLAGG’s website as of April 24, 2018 at 10:05 p.m. EST. The article briefly announces how Hayden was appointed to be a Justice of the High Court. The post appears to have been written in 2015.

In 2012, Hayden co-wrote Children and Same Sex Families: A Legal Handbook. Its description on amazon.com says:

This portable handbook brings together the up-to-date statutory and jurisprudential position in UK family law appertaining to same sex couples, with an emphasis on children, where the law is at its most complex. For example, in the UK, the same family unit can be in a very different legal position depending on when and how the children are conceived and the status of the relationship between the parents or between the parent and the child. This is an invaluable guide to a rapidly evolving area of UK law, written for all family lawyers and related professionals – in charities, local authorities, healthcare trusts, adoption agencies, and benefits agencies – who provide advice and support to same sex families. Contents include: parenthood * surrogacy and parental orders * registration * residence and contact following the breakdown of relationships * adoption * care proceedings for families involving same sex relationships * personal safety and the safety of children of same sex relationships * human rights * status * the breakdown of civil partnership and its effect on children * cohabiting couples * succession * welfare * benefits * pension provision * housing and tenancies.

At press time, the book only had one amazon review, which gave it five stars. The reviewer wrote:

This book, which could not have been written twenty or even ten years ago, reflects, as Anthony Hayden QC observes in the Preface, `the ever-evolving concept of the family'. We are more careful with our language now', he observes, especially in the wake of `the raft of equality legislation' which `provides a framework for a much fairer society in the future and one in which the options for children are expanded, keeping them at the centre of the legal process.'

“Mr Hayden cites ‘civil liberty issues relating to children and vulnerable adult medical intervention cases’ as a key interest,” and is an “expert in family and children’s law,” according to the largest family law firm in the UK.

In November 2017, Hayden ruled that a woman in a “minimally conscious” state should be starved to death because it would be in her “best interests.”

In 2016, in an apparent break with his typically pro-gay and pro-euthanasia rulings and leanings, Hayden removed a boy from his mother’s care because she was causing him “significant emotional harm” by insisting he pretend to a girl. In an article about that case, The Guardian only identified Hayden as “Mr Justice Hayden,” not by his full name, but it does not appear he shares a name with any other British judge.

The justice’s full name is Anthony Paul Hayden. He was granted knighthood upon his appointment to the High Court.