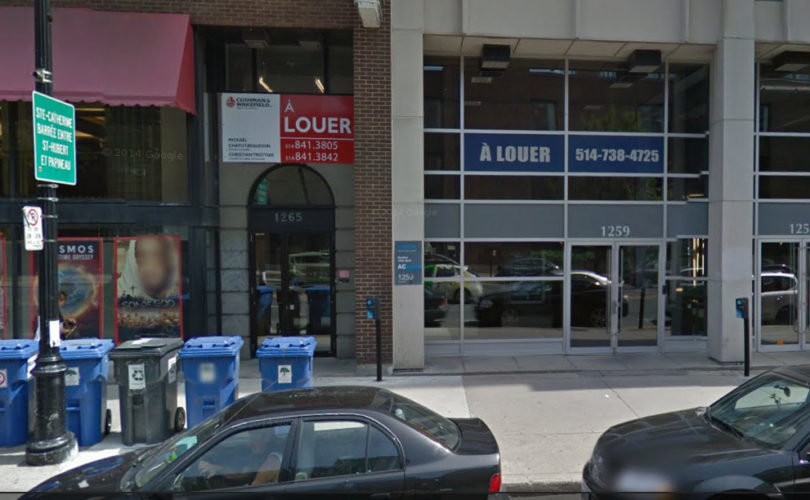 MONTREAL, August 26, 2015 (LifeSiteNews) – A  Quebec judge who pro-lifers say showed her bias against them throughout oral arguments surprised nobody by indefinitely perpetuating an injunction against pro-life street counsellors and by tripling the distance they must keep away from two downtown Montreal abortion facilities.

“Except for the Providence of God,” George Buscemi, the head of Campaigne Quebec-Vie, told LifeSiteNews, “it is very difficult to see any good in this.” The pro-life group plans to argue the issue at least one more time at a hearing on the permanent injunction the clinics have applied for.

According to those who attended the oral hearing several months ago, Judge Chantal Lamarche demonstrated her preference for the arguments from the two clinics, Femina and Morgentaler, “in a thousand details” and “body language.”

But most importantly, she demonstrated it in her decisions. She allowed purely anecdotal testimonies of a few clients and staff at a pair of downtown Montreal abortion facilities to be admitted as evidence that the pro-life counsellors were leaving them “disturbed, upset, angry, shocked, upset and stressed.”

More seriously, she rejected the basis of the Campaigne Quebec-Vie argument, said Buscemi. “In a nutshell, we argued that even if our sidewalk counsellors were causing clients some emotional distress, they were there to warn the women of a much greater harm that abortion would do to them.”

But Lamarche saw any evidence about the harm abortion does as arguing for it to be made illegal, which was irrelevant. All that matters in an interlocutory injunction hearing is which side is being injured more if the activity in question (sidewalk pro-life protests) is allowed to persist or not.

But she would not allow any evidence from a noted B.C. psychiatrist, Dr. Philip Ney, on the harmful effects of abortion itself nor that of several women who had received abortions.

The judge therefore granted an “interlocutory” or bridging injunction which will last until the hearings on the permanent injunction sought by the two clinics, Femina and Morgentaler, are held three months hence. And if Campaigne Quebec-Vie does not contest the application, the interlocutory ruling can last forever. In fact, the current dispute only arose because a temporary injunction pushing pro-lifers across the street from the Morgentaler Clinic’s suburban location in 1995 became inoperative last year because the clinic moved downtown.

After decades of watching the women enter the clinic from across the street, “Our people could get right up to the door of the clinic,” Buscemi told LifeSiteNews. “Close enough to give them pamphlets and talk to them.”

But Lamarche ruled their “actions certainly disturb a woman's right to privacy and dignity. They also infringe the rights of owners of buildings and clinics ‘peacefully enjoy the places.’”

While the previous injunction kept them across the street for 20 years, the new injunction pushes them a whole block away in each direction.

Nor is that enough. As journalist Marie-Claude Malboeuf noted in LaPresse, the clinics “want to now get an anti-harassment law that would create larger buffers and expose unruly activists to criminal penalties.” She cited British Columbia’s Access to Abortion Services Act, which puts a 10-metre buffer zone around all abortionists’ offices and allows for a bigger zone to be established in specific cases by cabinet order.

The Montreal Gazette was also sympathetic. “It is time for Quebec, which is home to nearly half the abortion clinics in the country, to examine enacting similar legislation. A few extra metres of guaranteed quiet and security for women and their health-care providers is surely not too much to ask.”

The irony of two newspapers calling for restrictions on free speech were lost on their editors. Nor was there any sign they or the judge believed that free speech was what the Canadian Charter of Rights and Freedoms calls it, “a fundamental right” enjoying over the right to privacy (and abortion) cited by Lamarche but found nowhere in the Charter.

According to the judge these were just two competing rights, with the right to privacy winning out in this case. According to Judge Lamarche, the demonstrators could always go and exercise their right to speak in some nearby parks (as long as they behaved themselves).

But Buscemi countered, “We are a poor group with just three permanent staff. To exercise our free speech with the resources we have, we need to talk straight to the women getting abortions. We cannot afford million-dollar billboard or TV campaigns. We need to narrow our audience. But from a block away—well, we might as well not be there.”

But at least one journalist saw the weakness in Lamarche’s ruling. Ray Y. Adamson of Le Bonnet de Patriotes commented:  “Holding a poster and offering a brochure or counselling is intimidation, really! So, you are a big girl, ready to interrupt your pregnancy, your possible future baby? Ok then, let's see what is more ‘serious’: killing life vs. a poster and unpleasant slogan. Must be the poster, obviously.”