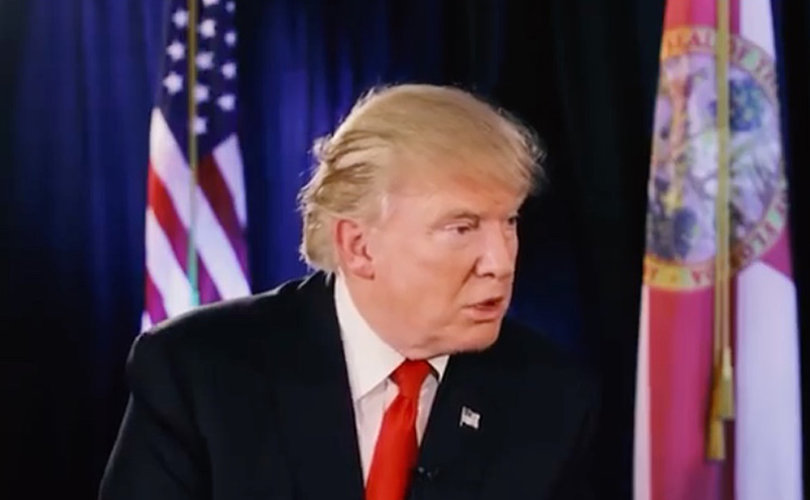 Trump talking about the serious need to protect religious liberty

SEATTLE, Washington, April 17, 2018 (LifeSiteNews) – A federal judge has ruled that President Donald Trump cannot yet enforce his recently-unveiled ban on transgender soldiers in the military.

US District Judge Marsha Pechman ruled Friday that the injunction currently barring the Pentagon from implementing the ban will remain in place, the Associated Press reports.

The Trump administration revealed the finalized version of the policy late last month. It disqualifies from service “transgender persons with a history or diagnosis of gender dysphoria,” specifically those who “may require substantial medical treatment, including medications and surgery,” except in “certain limited circumstances.”

The administration had requested that the court dissolve the previously-enacted injunction, on the grounds that the final policy addressed several original objections and should be judged separately. But Pechman, who was appointed by Bill Clinton, concluded that the injunction should remain in effect because there hadn’t been enough time to evaluate the new ban’s constitutionality. She directed both sides to prepare for a trial on the merits of the case.

Pechman declined pro-transgender attorneys’ requests to grant a permanent nationwide injunction that would have taken the place of a trial, and directed both sides to prepare their arguments. But she also tipped her hand as to how she was inclined to rule on those arguments.

“Because transgender people have long been subjected to systemic oppression and forced to live in silence, they are a protected class,” she wrote. “Therefore, any attempt to exclude them from military service will be looked at with the highest level of care.”

Pechman also chided Trump for “fail[ing] to identify even one general or military expert he consulted” before first announcing the ban on Twitter, “despite having been ordered to do so repeatedly.”

Pentagon officials acknowledged that the president gave them little advance notice of the tweet at the time, but it’s unclear what bearing this detail has on the case, given Trump’s original tweet was a mere announcement of intent without legal force. Regardless, the final policy was crafted after “extensive study by senior uniformed and civilian leaders, including combat veterans,” according to the White House and detailed by a memo from Defense Secretary James Mattis.

“Judges have no business displacing the reasoned decision of the president, under his constitutional authority as commander-in-chief, to promote military readiness by establishing sound principles for eligibility to serve in the armed forces,” Heritage Foundation legal expert Alden Abbott wrote in December. He explained that anti-discrimination laws apply to “immutable characteristics such as race,” whereas gender confusion is a “rationally based noninvidious differentiation among classes of individuals needed to advance national goals, such as a strong military.”

“Rules denying military service opportunities to individuals who have serious medical problems (for example, heart disease, chronic asthma, or cancer) are not invidious discrimination—they are fully rational efforts to promote well-run and effective military services,” Abbott continued. “Because individuals suffering from significant medical difficulties drive up costs and tend to impair combat effectiveness, it is perfectly rational to bar them from military recruitment.”

Among the specific complications transgender individuals present to the military, retired Army Lieutenant General Thomas Spoehr writes, is that those “transitioning” from one sex to the other “would need medical treatments — hormone therapies and often surgeries and the accompanying recovery times — throughout the duration of their service.”

Mattis told the House Armed Services Committee last week that he is “prepared to defend” the ban, and that it “was the best military advice” he could obtain, but also said he will “not intrude” on the court battle over its enforcement.