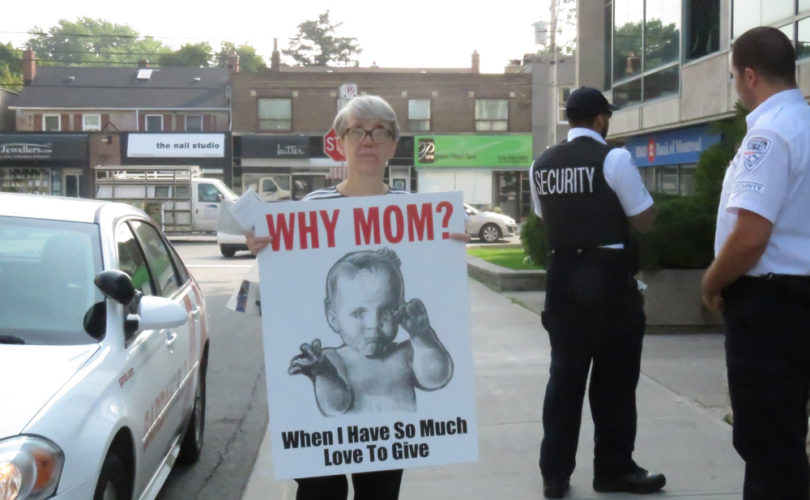 TORONTO, January 21, 2016 (LifeSiteNews) — An Ontario judge convicted pro-life prisoner of conscience Linda Gibbons today of breaking a 1999 civil injunction that bans pro-life activities within 500 feet of Toronto’s  Morgentaler abortion facility. Under the terms of the injunction, the judge also convicted Gibbons of being a “nuisance.”

Gibbons was arrested September 2 while walking back and forth in front of the Morgentaler abortion facility, located in an office complex on 727 Hillsdale Avenue in Toronto’s upscale Leaside neighborhood.

She was carrying a sign with an image of a young child. The sign read: “Why mom, when I have so much love to give?” In her hand she held small plastic replicas of a preborn baby as well as some pro-life pamphlets.

Crown attorney Daniel Brandeis called to the stand two abortion facility workers who claimed that Gibbon’s peaceful sidewalk witness caused a “disruption” to the facility. One worker testified that she felt that her “privacy” had been invaded by Gibbons’ presence.

The Crown was also prepared to call a security guard as a witness who would have testified that Gibbons had said to several women entering the abortion facility that there were alternatives to abortion, and that their unborn son or daughter needed them. Gibbons did not dispute that she had made these comments.

Gibbon’s defense attorney Daniel Santoro argued that his client’s actions did not constitute a breach of the 1999 injunction, but were instead peaceful leafleting, an action protected under the Constitution and affirmed by a 1999 freedom-of-expression Supreme Court decision involving strikers distributing fliers outside of K-Mart.

Santoro also argued that a previous conviction of Gibbons on similar charges had been overturned by Ontario Superior Court Judge Gary Trotter, in a July 2014 hearing on her appeal of a 2012 conviction.

But Judge Mavin Wong of the Ontario Court of Justice at College Park responded by finding Gibbons guilty and calling the abortion mill workers’ testimony “credible.” While making her judgement, Wong read a passage from another court decision that called abortion protesters “typically violent and aggressive,” although the Crown had brought no evidence that Gibbons had acted in anything but a peaceful manner.

“I am satisfied beyond a reasonable doubt that Ms. Gibbons willfully, without lawful excuse, disobeyed specific conditions of a lawful order and she will be found guilty as charged,” the judge wrote in her ruling obtained by LifeSiteNews.

Judge Wong sentenced Gibbons to the maximum prison term of six months. Since Gibbons had already been in prison for 141 days, the judge applied the usual 1.5 factor for time served, and Gibbons was released.

Judge Wong also imposed a two year probation order that prohibits Gibbons from being within 50 meters of any “freestanding abortion facility.”

Gibbons’ attorney said after the sentencing that he is considering an appeal.

After the sentencing, Gibbons stepped out of the court room smiling and receiving hugs from supporters, giving no indication that she is ready to slow down in her commitment to being a voice for preborn babies targeted for abortion.