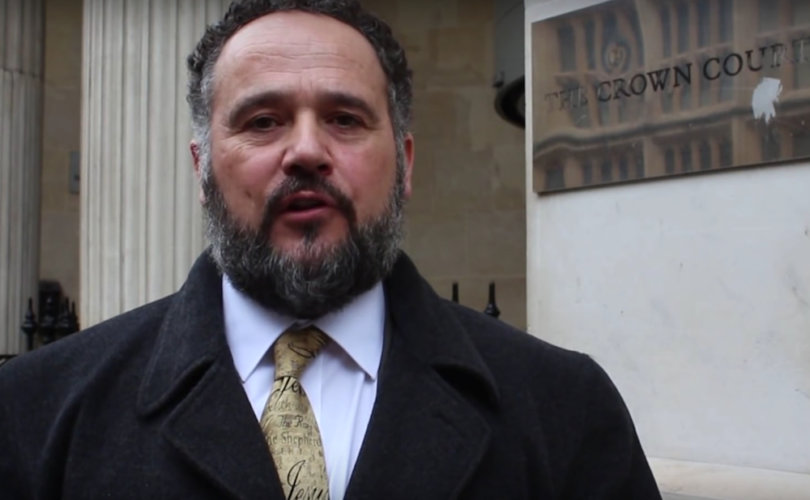 'I am amazed that the judge sees it as his role to dictate which parts of the Bible can and can't be preached,' the evangelist said.Christian Concern

TAUNTON, UK, April 2, 2015 (LifeSiteNews.com) – A judge has convicted and fined a street evangelist for quoting one verse of the Bible that condemns homosexuality on the streets of Taunton, Somerset — instead of quoting another verse.

Judge Shamim Ahmed Qureshi of Bristol Crown Court fined former paratrooper-turned-Christian-evangelist Mike Overd £200 ($297 U.S.), and ordered him to pay £1,200 ($1,780) in costs which included £250 ($371) compensation to the homosexual activist who lodged the complaint.

Judge Qureshi also told Overd that he should not have quoted a passage from the 20th chapter of the Old Testament Book of Leviticus, which calls for the death penalty for Israelites who engage in sodomy. Qureshi said that Overd should instead have used Leviticus 18:22, which merely describes homosexual practice as an “abomination.”

“I am amazed that the judge sees it as his role to dictate which parts of the Bible can and can't be preached,” the evangelist said.

“I did not quote the full text of Leviticus 20 or make reference to the death penalty but the judge is telling me that I should use other parts of the Bible. This is not free speech but censorship. The judge is redacting the Bible,” Overd said, according to a report by the Christian Legal Centre, which represented him in court.

“I have been ordered to pay compensation for causing ‘emotional pain’ to someone who approached me aggressively, demanding to debate the issue. There was no harm, injury, or theft – just a simple disagreement over theology which I have now been fined for,” he added.

Christian Legal Centre (CLC) lawyers Paul Diamond and Michael Phillips pointed out a “highly unusual aspect of the case” in that witnesses of Mr. Overd's alleged offensive statements couldn't seem to recall what he said or when he said it.

The CLC report noted that “One of the eyewitnesses, Nigel Marley, said in a statement that he was 'unable to recall exactly what phrases he was using, but it was clear to me that it was homophobic.'”

“Mike’s boldness and his witness to Jesus is remarkably similar to that of the apostles in the early years of the church,” said Andrea Williams, chief executive of the Christian Legal Centre.“They were also hauled before the courts to defend themselves for preaching a message of love and truth. They also faced trumped up accusations in an attempt to portray them as ‘disruptive.’”

“Now, as then, the disruptive ones appear to be the people who bring accusations, on the flimsiest of evidence, against a man who loves Jesus and loves people. This is why Mike gets up and preaches in Taunton town centre.

“There will always be those who disagree with the Bible’s teaching. But we should defend to the hilt the freedom to proclaim it in a loving way, which is what Mike Overd always seeks to do,” Williams concluded.

“My motivation for preaching the Gospel is my love for Jesus Christ and my deep concern for people who do not know His great love and are heading towards an eternity separated from God,” Overd said.

Mr. Overd said after the sentencing that he intends to go right back to preaching on the streets of Taunton. “I follow my Lord and leader, so I won’t tone down.”