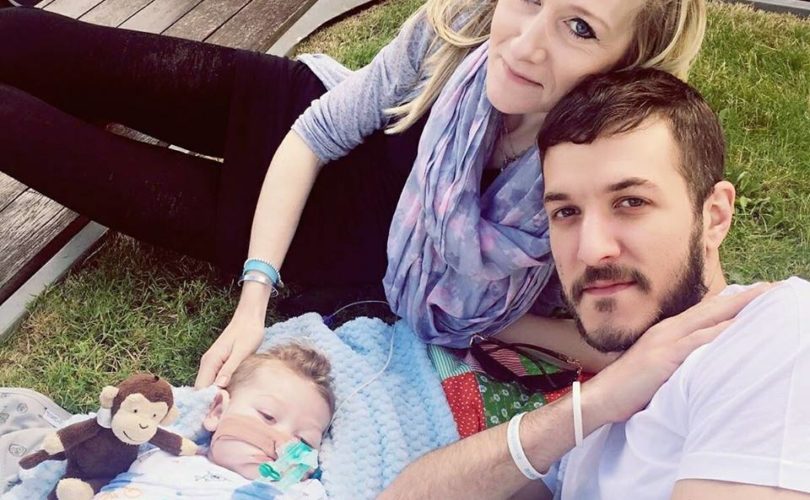 LONDON, England, July 10, 2017 (LifeSiteNews) – At a preliminary hearing today, a UK judge agreed to hear new evidence in Charlie Gard's case on Thursday. His parents have 48 hours – until 2:00 p.m. on Wednesday – to provide this evidence to the court.

“Ten percent,” Charlie's mother, Connie Yates, said to the judge, Mr. Justice Francis, of her son's chances at dramatic improvement. “You would [let him live] if it was your son, wouldn’t you?”

There has been a lengthy legal battle over whether Great Ormond Street Hospital or Charlie's parents have the right to decide on his treatment, with the former trying to pull the baby's life support and the latter wanting to move him elsewhere for experimental treatment. English courts and the European Court of Human Rights both sided with the hospital even though Charlie's parents, Chris Gard and Connie Yates, have raised more than $1 million from private donations to transfer him to the U.S.

After worldwide outcry, including from Pope Francis and President Trump, Great Ormond Street Hospital asked the High Court to reconsider “fresh evidence” in the case. However, it maintains its stance that Charlie should be removed from life support against his parents' wishes.

International human rights activist Rev. Patrick Mahoney, who is helping Charlie's parents, posted on Facebook on Monday that Great Ormond Street Hospital requested in court that the case be dismissed. But Francis “has set a full hearing to decide Charlie's future this Thursday based on new evidence,” Mahoney said.

Francis, who originally sided with the hospital, said he would be “delighted” to reverse his decision.

“I don’t think there’s anyone involved who wouldn’t want to save Charlie,” said Francis. “I am at one with the 350,000” people who signed a pro-Charlie petition delivered to Great Ormond Street Hospital Sunday. He also said he must “decide this case not on the basis of tweets, not on the basis of what might be said in the press, or to the press.”

The new evidence from Charlie's parents must include information about “when it was published” and “when it became available to them.”

Francis said it would take “drastic” evidence for him to undo his original ruling that Charlie should be removed from life support.

Great Ormond Street Hospital only brought the case back to court because if it didn't, it could have faced possible “judicial review.” But, it asked today for the case to be dismissed. The hospital maintains that Charlie should not be allowed to be transferred elsewhere for treatment.

Katie Gollop, a laywer for the hospital, “said she had seen nothing that could be called new evidence,” according to The Guardian. She said “that her client had only asked for a new hearing because of the letter from the seven doctors sent from the Vatican children’s hospital and also one from the parents’ solicitor threatening it with judicial review if it did not consider new evidence.”

During today's court proceeding, Chris asked Gollop when Great Ormond Street is “going to stop lying.” ABC News described this as an interruption.

Gollop has previously argued that the reason Charlie's life support should be unplugged is because if it's not, he will remain in a “condition of existence” that doesn't benefit him.

“The significant harm is a condition of existence which is offering the child no benefit,” she said. “It is inhuman to permit that condition to continue.”

Connie says her son is “not in pain and suffering.” On Sunday, Chris refuted the media myth that Charlie has “catastrophic brain damage.”