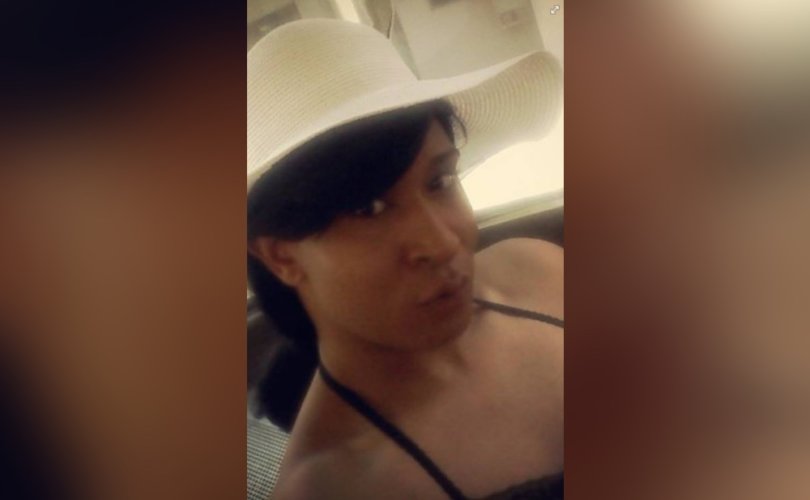 TORONTO, Ontario, November 20, 2018 (LifeSiteNews) – A transgender prostitute who stabbed another man to death is being given a break on his prison sentence because a judge thinks the convict has already suffered more than non-transgender felons by being incarcerated in a men's prison after his arrest.

“The court is leaning over backwards to give 'her' special privileges,” said Gwen Landolt, the pro-life and pro-family lobby group's national vice president, in an interview.

Curtis Gordon Dawkins is a 28-year-old man who thinks he's a woman. He was working as a prostitute and calling himself “Moka” in early August 2015 when he stabbed Jamie Foster, a john, multiple times, both in a living room and a bedroom.

Toronto police arrived at the crime scene at 1:46 a.m. on the day of the stabbing to find Dawkins covered in blood, shouting incoherently, and holding a sword in one hand and two kitchen knives in the other.

“After being handcuffed, Ms. Dawkins continued to act wildly, yelling, screaming, shaking her head violently, and throwing herself on the ground,” a court document states.

Dawkins, who was charged with murder, originally claimed he acted in self-defense. His lawyer tried to introduce evidence from a sociologist, Dr. Vivienne Namaste, that purportedly showed transgender people, particularly those who work as prostitutes, suffer more violence and their responses to attacks are different because of their experiences.

Superior Court Justice Robert Clark threw out that evidence, ruling it was unnecessary.

“I am not persuaded that, when confronted with physical violence, transgender people react in any fundamentally different way than non-transgender people. I conclude, therefore, that this aspect of Dr. Namaste’s proposed evidence is not necessary,” the judge wrote in a ruling on the matter.

A jury rejected Dawkins' claim of self-defense, finding the accused guilty of manslaughter in the slaying of 27-year-old Jamie Foster but not of second-degree murder. The killer was sentenced to eight years.

But Dawkins will only spend 18 months in jail after his trial.

That's because Justice Clark has given him enhanced credit for the time he spent in jail before and during the trial. The judge decided to credit Dawkins two days for every day he spent in custody at the all-male Toronto South Detention Centre even though it was Dawkins himself who chose to go to that all-male prison rather than a women's prison.

Dawkins, who was the first transgender person to be held in that prison, reportedly claimed he was verbally abused and physically attacked there because of his gender identity and sexual orientation. According to news reports, Dawkins' transition to a female gender identity was not yet complete at the time of the arrest.

According to Landolt, the accommodations made by the court for this convicted killer only serve to show how completely untenable transgenderism is.

“This just points to the absurdity of this transgender business,” said Landolt. “This 'woman' wants it both ways. 'She' kills someone and then she wants pity from the court … 'She's' expecting special privileges. 'She' wants to be given everything.”

The national vice president for REAL Women said the court's decision to give Dawkins two days of credit for every day spent at the Toronto South Detention Centre will only put a convicted killer back on the streets sooner than usual.

“Here's an unstable, mentally-incapable person who killed someone and now will be on the streets sooner than someone else,” said Landolt. “The court was absolutely wrong.”

During the trial, a social media campaign, “Justice For Moka,” urged people to pack the courtroom during Dawkins' sentencing hearing.

The campaign portrayed Dawkins, who is black, as the victim of a police and media campaign that organizers claimed relied “heavily [on] racist, transphobic language and anti-sex work sentiments.” Dawkins was described as something of a crusader for the rights of marginalized people, as “someone who has lived with and continues to resist violence against Black LGBTQ sex workers in the city.”

Organizers called on the community to surround this convicted killer with love.

Landolt considers the current practice of allowing people to identify their own gender as senseless and “a pathetic misrepresentation of reality.”

She urges all social conservatives in Canada to speak up against Bill C-16, the law introduced by Prime Minister Justin Trudeau's government two years ago that added gender expression and gender identity to the protected grounds under the Canadian Human Rights Act and to Criminal Code provisions dealing with hate propaganda, factors in sentencing, and incitement to genocide.

“There is no rational reason why we should put up with this as taxpayers,” said Landolt.