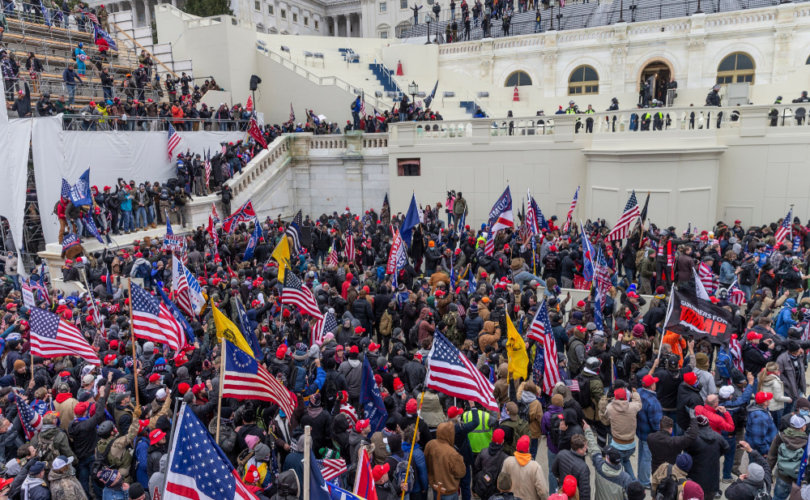 Protesters at the U.S. Capitol on January 6, 2021.Shutterstock

WASHINGTON, D.C. (LifeSiteNews) – A Texas man in possession of a firearm while on U.S. Capitol grounds during the January 6, 2021 disturbance was issued the longest prison sentence to date for crimes connected to that day’s riot.

Guy Reffitt, 49, was sentenced to 87 months — more than seven years — in federal prison, three years of supervised release, and $2,000 in restitution and mandatory mental health treatment, according to  The Epoch Times.

Having refused a plea deal in favor of a jury trial, Reffitt also petitioned for a change of venue along with several other Jan. 6 defendants. The accused protesters argued that the jury pool in Washington was predisposed to rule against them due to that population’s high percentage of Democrat voters who have also been subjected to inaccurate media reports.

Reffitt’s petition was rejected, and in March a D.C. jury convicted him on five felony counts, including obstruction of an official proceeding, civil disorder, obstruction of justice, transporting firearms to Washington, D.C. for a riot, and threatening his teenage son upon returning to Texas.

According to the prosecutors, Reffitt was on the west side of the Capitol just before 2 p.m. that day and “charged up the Capitol steps toward Capitol police officers,” where he was sprayed with a chemical agent and shot with rubber bullets. At this point, Reffitt washed the contagion out of his eyes, returned to his hotel and departed for Texas.

After his return home, Reffitt, who is a member of the Three Percenters militia group, told his daughter Peyton and 19-year-old son Jackson that anybody who turned him in “would be traitors,” and “traitors get shot,” according to a recording captured by his son.

In a letter to the court before his sentencing, Reffitt did express regret, stating, “I became energized by the crowd and I am not proud of what I did on the Capitol staircase that day … My regrets are immense.”

U.S. District Judge Dabney Friedrich, the Trump appointee who handed down the sentence, questioned his sincerity, noting also that he hadn’t disavowed the Three Percenters and had shown propensities to violence in the past.

Though Reffitt, a former oil industry worker, did concede bringing a handgun to Washington, he said he disassembled it to comply with the law. He also was not charged with brandishing the weapon.

Though prosecutors recommended a 15-year sentence, his defense attorney, F. Clinton Broden, asked for just two years, arguing his client had no criminal history and committed no violence, according to Yahoo.

Last year, Revolver News issued a report on U.S. Department of Justice court filings that indicated how FBI operatives may have not only participated in the January 6 riot but had a role in actually organizing it as a means of entrapment. Amplifying and summarizing this report, Tucker Carlson said at the time, “FBI operatives were organizing the attack on the Capitol on January 6, according to government documents.”

Such incidents of FBI entrapment have been reported for years, including in one book titled The Terror Factory, wherein the author analyzed “terror” prosecutions from 2001 to 2013 and discovered that at least 50 defendants were on trial because of malevolent conduct that the FBI had not only encouraged but enabled.

When such mob conditions as the Jan. 6 disturbance come about, sociologists explain that principles of crowd psychology are predictable and begin to influence personal conduct due to the perception of a “universality of behavior” resulting in a perceived loss of individual responsibility.

Julie Kelly, a senior contributor for American Greatness, has documented how the Biden administration’s unprecedented “shock and awe” investigation of the January 6 riot represents a “weaponization of powerful federal agencies against regular Americans who dared, not just to vote for Donald Trump, but also to doubt the legitimacy of the 2020 presidential election.”

Despite unmatched media and Big Tech suppression of the topic, a May survey conducted by Rasmussen found that a majority of American voters still judge the results of the 2020 presidential election to be fraudulent.

The Department of Justice, under Merrick Garland, has charged more than 850 people with crimes related to the Jan. 6 disturbance. More than 200 have accepted plea deals to mostly misdemeanor charges, and approximately 339 still await trials on felony charges.

After Reffitt’s conviction in March, his wife, Nicole, told reporters outside the courthouse that the verdict was “against all American people” and their First Amendment rights, and an attempt to “intimidate other members of the 1/6ers” to accept a plea deal by making an example of her husband.