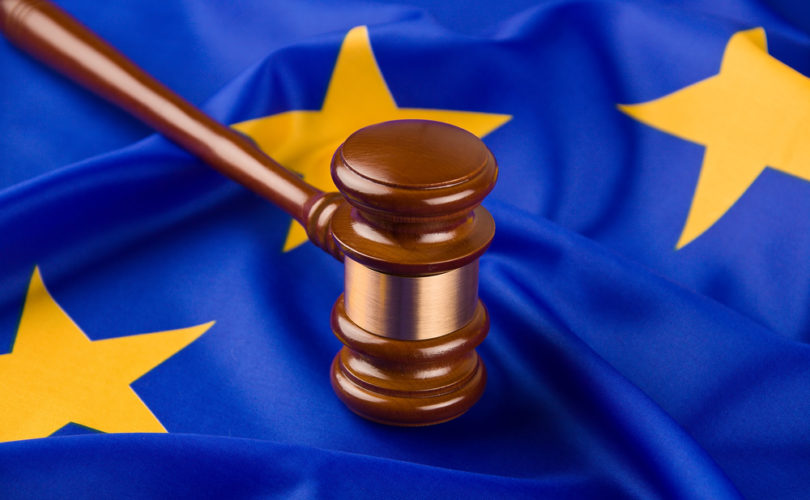 April 30, 2018 (C-Fam) – One of Us, a six-year pro-life campaign supported by nearly two million EU citizens was rejected by the EU Court of Justice last week.

“The trial constitutes an institutional victory and an ethical defeat for One of Us,” wrote Grégor Puppinck, Director of the European Center for Law and Justice, immediately following the judgment on Monday.

While on a procedural and theoretical level the pro-life campaign won the arguments about the law it lost the case on the merits, and the political opportunity to force the EU parliament to discuss a ban on embryo-destructive research and funding for abortion abroad through EU foreign aid – essentially a European version of the Mexico City Policy.

Puppinck, who launched the campaign in 2012 alongside other European pro-life leaders, oversaw the litigation of the petition at all stages.

In an interview with the Friday Fax he sounded upbeat despite the loss: “It could have been worse. The Tribunal could have decided that the European Commission has a 'carte blanche',” he said, “This ruling curtails the monopoly of legislative initiative given to EU bureaucrats since its origin,” and it's a “small step toward subjecting the Commission to judicial review.”

“Until our initiative, the European Commission would have never recognised openly that it gives millions of Euros to practice abortions in poor countries,” Puppinck said. “The Commission refused to answer our question as to the status of human life before birth, whereas at the same time many EU provisions require respect for human dignity before birth.”

One of Us sued the EU Commission in 2014 at the EU high court after the court summarily dismissed its petition calling for EU legislation banning embryo-destructive research and funding abortion with EU funds. The campaign surprised and frustrated the European bureaucracy by its persistence despite attempts to suppress it and dismiss it.

Rather than submit the petition as a legislative proposal to the EU parliament, the Commission merely dismissed it in a report, putting its decisions above the scrutiny of the EU high court. Two million EU citizens backed One of Us.

One of Us claimed this was a violation of the Lisbon Treaty's provision for EU citizen's initiatives, and undermined one of few democratic functions of EU institutions if not the only one.

The pro-life leaders argued that the Commission was required to transmit the petition to the European Parliament under the Lisbon Treaty, absent a show that the petition was bogus or otherwise inappropriate. They pointed to several discrepanciesin the EU Commission's report that showed lack of good faith or just negligence in the Commission's consideration of the One of Us petition.

The Court turned One of Us' argument on its head, exacting that difficult “manifest error” standard of the Commission, rather than the petition.

The Court recognized that One of Us could challenge the discretion of the commission but said Court review of EU Commission decisions must be deferential to the Commission. It rejected the challenge on the basis that it did not find any “manifest error” or evident improprieties.

One of Us may not appeal the decision to a full sitting of the European Court of Justice because it won the arguments about the law, and an appeal is only allowed on matters of law.