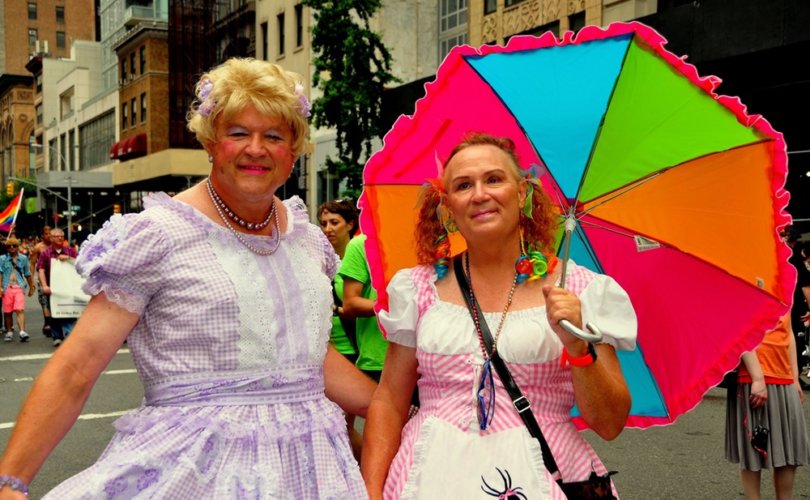 LONDON, England, April 16, 2018 (LifeSiteNews) – An English judge told an assault victim to use her attacker’s preferred gender pronoun, the latest development in the ongoing collision between feminist and transgender activists.

Maria Maclachlan, 61, is a self-described Trans-Exclusionary Radical Feminist (TERF), part of a faction that believes men who identify as female should not be recognized as women. The UK Telegraph reports that she was among the speakers for a TERF event in London’s Hyde Park last September. The event was meant to discuss potential changes to the UK’s 2004 Gender Recognition Act.

MacLachlan says that while filming a group of counter-protestors chanting “When TERFs attack, we strike back,” 26-year-old trans activist “Tara” Wolf punched her, knocking her to the ground.

During MacLachlan's testimony this week before the Hendon Magistrate’s Court, District Judge Kenneth Grant chided her for not referring to Wolf, a biological male, with female pronouns.

“The defendant wished to be referred to as a woman, so perhaps you could refer to her as 'she' for the purpose of the proceedings,” Grant said.

“I'm used to thinking of this person who is a male as male,” MacLachlan responded.

“A hooded figure suddenly ran at me, ran past me from left to right, knocking the camera from my hand,” she testified. “They swatted it. Although it was knocked out of my hand it was caught by the strap so it didn't hit the ground, which I thought was the intention.”

Wolf claims he acted in self-defense, claiming that MacLachlan was shaking his partner “like a rag doll.” MacLachlan says she was only reacting to the unidentified partner kicking her first and attempting to grab her camera.

He also expressed fear that she was filming the event in order to out the group as transgendered.

“Terfs have a history of taking people's pictures and posting them in pages like GenderIdentityWatch.com, a database that makes us a target for the far-right,” he testified. [MacLachlan] “was trying to get people's faces.”

MacLachlan admits to tweeting a picture of Wolf’s face but denies that she meant to “out” anyone or even knew the group was transgendered.

“They were not easily perceived as trans,” she testified.

The Evening Standard adds that Wolf also admitted to posting “I wanna f*** up some terfs” on Facebook prior to the event.

Ultimately, the judge found Wolf guilty of assault, and ordered him to pay a total of £430 in fines and expenses. He rejected his self-defense argument on the grounds that multiple attendees on both sides had been filming the event.

However, Grant also rejected MacLachlan’s request for compensation, “due to the unhelpful way in which the victim was present” at the protest, including her repeated refusal to stop filming.

The judge also reiterated his displeasure at MacLachlan refusing to address the man as a woman.