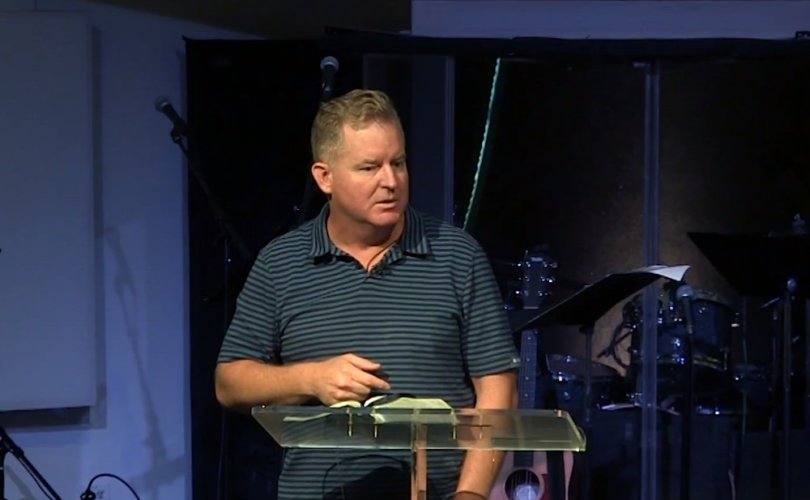 NEW YORK CITY, January 28, 2020 (LifeSiteNews) — A federal court dismissed a lawsuit filed by a Christian pastor against video hosting platform Vimeo for violating his freedom of speech when it deleted his account because he hosted videos to help people overcome unwanted same-sex attraction.

Pastor James Domen is the founder of Church United, a non-profit religious organization dedicated to changing “the moral culture of our communities in California,” and an advocate for people seeking to overcome unwanted same-sex attraction. He is also the married father of three children.

In several videos Domen posted on Vimeo, he discussed A.B. 2943 — a bill being considered in the California legislature, which proposes to ban so-called conversion therapy in the state.

Vimeo sent a message to Domen in November 2018 claiming that several of his videos violated company policy.

The video hosting website claimed: “Vimeo does not allow videos that promote Sexual Orientation Change Efforts (SOCE).” The website gave Domen 24 hours to remove the offending content or face sanctions. When Domen did not remove the videos, Vimeo shuttered his account for “videos that harass, incite hatred, or include discriminatory or defamatory speech.”

In June 2019, Domen filed a lawsuit, claiming that Vimeo had violated his freedom of speech by removing his account. However, a magistrate in a New York federal court dismissed the complaint on January 14.

Moreover, the complaint asserted that “the violation of Vimeo guidelines was merely a pretext to justify restricting and censoring Church United and James Domen’s videos.” Of the 89 videos Domen had uploaded to Vimeo, about five of them dealt with changing sexual orientation. Domen had posted on Vimeo’s for-pay premium version. YouTube, the world’s dominant video platform, does permit videos that include so-called gay conversion content.

According to the complaint filed with the court, the first video flagged by Vimeo as inappropriate featured Domen explaining his life story and his turn from a homosexual lifestyle, conversion to Christianity, and subsequent years as a father and married man and Christian pastor. A second flagged video promoted the Freedom March Los Angeles, which is an event that brings together individuals who identify as former homosexuals, as does Domen. Yet another video featured an interview with Luis Ruiz, a survivor of the 2018 terrorist attack on the gay Pulse Nightclub in Florida. Ruiz is now a Christian and former homosexual.

In response to the deletion of Domen’s videos for violating Vimeo’s terms of service, Domen’s attorney, Robert Tyler, argued, “That’s like telling Rosa Parks to find another bus.” Parks was a famed civil rights advocate who faced jail in Alabama after she refused to give up her seat to a white passenger in 1955 in accordance with the state’s racist laws. Tyler argued that there are numerous videos on Vimeo dealing with sexual orientation and that Domen’s videos were banned solely because he identifies as a former homosexual.

In his filing in the California court where the lawsuit originated, Domen’s attorney asserted:

Plaintiffs are further informed, believe, and thereupon allege that Vimeo deleted Church United’s account because of Vimeo’s subjective belief that one may not change their sexual orientation. Specifically, Vimeo’s acts were premised on their discriminatory belief that James Domen preferred identification as a former homosexual is harmful, fraudulent, and culturally inacceptable.

Vimeo argued in court that Domen wanted to force the company to “publish, host, and stream videos containing ideological messages with which Vimeo disagrees.”

Vimeo is based in New York City and claims to host video content by more than 90 million members in 150 countries. Tyler said in an interview with LifeSiteNews that Vimeo offers videos by others that recount the shift of some people from a heterosexual life to a homosexual one. Also, Vimeo hosts videos featuring nudity but ostensibly bans pornography, according to its policy on “Acceptable Use.”

Magistrate Judge Stewart D. Aaron of the Southern District Court of New York dismissed the case on January 14 on the basis of Section 230 of the Communications Decency Act (CDA) of 1996, claiming that Domen’s “allegations cannot plausibly establish a lack of good faith on the part of Vimeo since the purpose of Section 230 was to insulate interactive computer services from liability for removing some content, but not other content[.] … There simply are no substantive allegations to support the notion that Vimeo somehow was targeting Domen because he is a ‘former homosexual,’ as Plaintiffs posit.”

During his deliberations, Judge Aaron wondered whether the deletion of content was actually considered by Congress when it drafted the CDA, which gives immunity from liability to platforms such as Vimeo. An attorney for Vimeo affirmed that the company actively makes editorial decisions, thus making it an “active publisher” rather than a “passive conduit” described by Domen’s attorneys. The Vimeo attorney argued that constitutional free speech provisions and Section 230 of the CDA protected the company’s rights to restrict the content users may upload to the platform. Vimeo’s attorney argued earlier that a reinterpretation of the CDA as not providing immunity from liabilities arising from deletion and exclusion would counter more than 20 years of precedents.

In a written statement to LifeSiteNews, Tyler declared: “The court’s interpretation of the Communications Decency Act is too broad because it effectively allows a social media platform to discriminate for unconscionable reasons.” If the New York federal court’s opinion is sustained, he fears that ethnic minorities and members of legally protected classes will not be able to sue social media platforms despite evidence that an account cancellation came about because of the individual’s membership in the protected class. Tyler does not believe that this was Congress’s intent. .

In the interview with LifeSiteNews, Tyler said he will appeal the decision within the next few months, and did not dismiss the possibility of going as far as the Supreme Court.

During the interview, Tyler recalled that advocates of same-sex “marriage” have contended in the past that sexual identity can change over a lifetime and is a reason why such unions should be permitted. Tyler told LifeSiteNews that, in arguments before a federal court about California’s Proposition 8, which had enshrined the definition of marriage as between a man and a woman, expert advocates for gay “marriage” said sexual orientation can change in two directions and that some individuals may always remain either heterosexual or homosexual, but others change along a “spectrum” of preferences. “Their experts said that in the same-sex marriage trial, but for some reason at this point in time,” Tyler said, “the last thing they want is to allow anyone to speak up about the ability for some to make a choice whether or not their desires change 100%. They want to eliminate choice altogether.”

Doug Mainwaring of LifeSiteNews reported on a rally held in October by Domen and other former homosexuals, who called on the U.S. Congress not to endorse the so-called “Equality Act” and “Therapeutic Fraud Prevention Act” that would prevent others from seeking to escape LGBT lives. Domen told LifeSiteNews at the time, “We are being targeted by city, state and the federal governments here in the United States.”

Around the United States and Europe, laws are not only being proposed, but being enforced against those offering help to persons struggling with unwanted same-sex attraction or gender dysphoria — which are often the result of childhood trauma such as sexual or emotional abuse, depression, and family dysfunction.

Spanish life coach Elena Lorenzo, for example, is appealing for help while facing thousands of euros in fines because she offered counseling to people seeking to conquer unwanted same-sex attraction. In April 2019, Spanish authorities levied a fine of more than $20,000 on her for allegedly promoting “homosexuality healing therapies,” which are outlawed by the metropolitan government of Madrid. Lorenzo told LifeSiteNews she has merely accompanied and helped people who have approached her of their own free will with the express desire of leaving same-sex attraction behind. Claiming she is the subject of political persecution, Lorenzo said the fine she faces is “a very serious warning to those of us who think differently.” She fears that it heralds a regime of “fear and silence” in Spain that may target Christian ministers seeking to counsel their congregations.

Lorenzo is not the only person facing official sanctions for giving aid to persons struggling with same-sex attraction in Europe. Bishop Juan Antonio Reig Pla of Alcala de Henares, a suburb of Madrid, is facing a government investigation after a journalist, who posed as a person sincerely seeking to abandon homosexuality, in turn published a report that LGBT advocates seized upon as evidence of so-called conversion therapy. Bishop Reig Pla has since insisted that he is prepared for “martyrdom” to defend the Church’s mission to aid sinners and denounce sin.

In the U.K., psychologist Mike Davidson, a former homosexual, lost his professional license because of his work to counsel persons seeking to abandon the homosexual lifestyle. His advocacy group was ordered to pay the equivalent of $155,000 in legal costs following a lawsuit against London’s transport authority. Core Issues, a nonprofit Christian charity, sued the government after then–London mayor Boris Johnson (the current prime minister) ordered that the group’s message countering the LGBT agenda be banned.