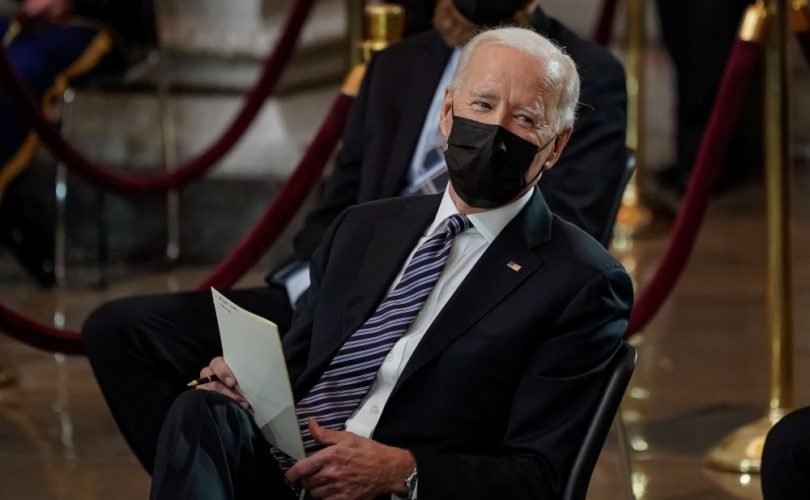 WASHINGTON (LifeSiteNews) — The Biden administration indicated Friday it will not commit to holding off on firing military members and civilian federal employees seeking religious exemptions from mandatory COVID-19 vaccination at least until their case is fully adjudicated, despite a Thursday order to that effect by Washington, D.C., District Judge Colleen Kollar-Kotelly.

“None of the civilian employee plaintiffs will be subject to discipline while his or her request for a religious exception is pending,” reads the order obtained by Fox News. Kollar-Kotelly, appointed by Bill Clinton in 1997, also asked the administration to confirm in writing, by noon Friday, that “active duty military plaintiffs, whose religious exception requests have been denied, will not be disciplined or separated during the pendency of their appeals.”

On Friday, the White House responded with a statement suggesting the plaintiffs’ fears are baseless: “It is Plaintiffs’ burden to demonstrate impending irreparable harm … but Plaintiffs offer nothing beyond speculation to suggest that their religious exception requests will be denied and that they will be disciplined at all, much less on the first day that such discipline is theoretically possible.”

In fact, the administration’s own Safer Federal Workforce Task Force says that federal employees who are not “fully vaccinated by November 22, 2021,” will be “subject to discipline, up to and including termination or removal.” They will actually have to have received the final dose of whatever vaccine they choose “no later than November 8” in order to be considered “fully vaccinated” by the deadline.

The Task Force does acknowledge that agencies “may be required to provide a reasonable accommodation” to those with a “sincerely held religious belief, practice, or observance” against the shots, but many are skeptical the administration will honor such accommodations, particularly in light of stories such as journalist Liz Wheeler’s Wednesday scoop that the U.S. Navy plans to “issue blanket denial of religious exemptions” to the mandate.

“The Biden administration has shown an unprecedented, cavalier attitude toward the rule of law and an utter ineptitude at basic constitutional contours,” said Michael Yoder, the attorney representing 20 federal employees suing President Joe Biden and members of his administration over an executive order mandating COVID shots for federal employees.

“This combination is dangerous to American liberty,” he continued. “Thankfully, our Constitution protects and secures the right to remain free from religious persecution and coercion. With this order, we are one step closer to putting the Biden administration back in its place by limiting government to its enumerated powers. It’s time citizens and courts said no to tyranny. The Constitution does not need to be rewritten, it needs to be reread.”

The next step of the case remains to be seen, as is whether the administration will keep to its implicit assurance that religious exemptions will be honored.

Aversion to the COVID vaccines persists due to a variety of factors. Moral and religious objections are rooted in the fact that all three of the shots currently used in the United States relied, to varying degrees, on the use of human cells from aborted babies in their development and/or testing process.

Others continue to harbor reservations about the vaccines’ safety and effectiveness, stemming primarily from the fact that they were developed and released far faster than any previous vaccine.

Vaccine defenders argue that this one-year development period was not starting from scratch, but rather relied on years of prior research into mRNA technology; and that one of the innovations of the Trump administration’s Operation Warp Speed was conducting various aspects of the development process concurrently rather than sequentially, eliminating delays unrelated to safety. However, those factors do not fully account for the condensing of clinical trial phases — each of which can take anywhere from 1–3 years on their own — to just three months apiece.

Further, a growing body of data indicates that the mass vaccination strategy for defeating COVID-19 has failed, thereby undermining the rationale for mandates. The federal government considers more than 189 million Americans (57% of the eligible) to be “fully vaccinated,” yet ABC News reported on October 6 that more Americans died of COVID-19 this year (353,000) than in all of 2020 (352,000), according to data from Johns Hopkins University.

This summer, a team of researchers with Johns Hopkins School of Medicine “analyze[d] approximately 48,000 children under 18 diagnosed with Covid in health-insurance data from April to August 2020,” and found a “mortality rate of zero among children without a pre-existing medical condition such as leukemia.” The lead researcher, Dr. Marty Makary, accused the CDC of basing its advocacy of school COVID vaccination on “flimsy data.”