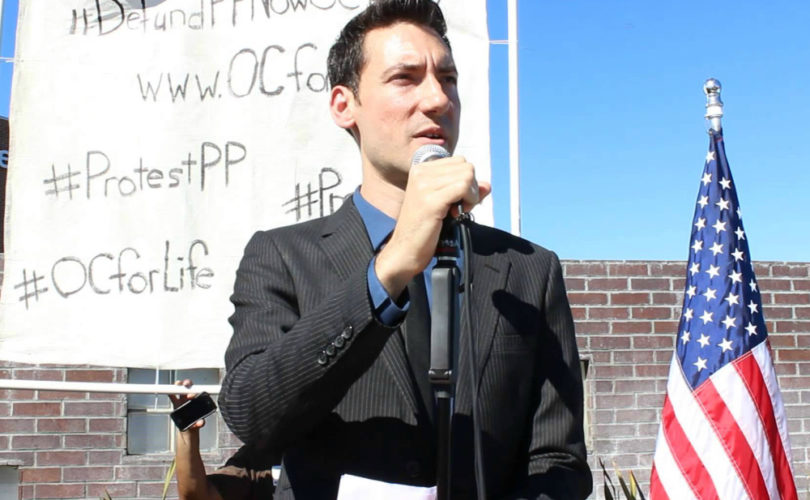 Orrick awarded the National Abortion Federation (NAF) approximately $137,000 for attorney fees, security costs, and staff time the abortion trade group claims has gone toward searching the Internet for links to Daleiden’s videos. Daleiden must also turn over videos and any materials relating to the court order.

Monday's contempt ruling against Daleiden is combined with Orrick’s decision last week that his lawyers, former Los Angeles prosecutor Steve Cooley and Brent Ferreira, had violated Orrick’s injunction against release of footage from the NAF’s 2014 and 2015 conferences.

Cooley and Ferreira told Associated Press they plan to appeal the ruling.

“We do not believe” the NAF should get any money, Snyder said. “They’re the criminals here. It’s outrageous that they should be receiving anything.”

Orrick had issued a gag order blocking release of those videos last year. However, publicly accessible links to some of footage were posted on Cooley and Ferreira’s website in May.

Cooley and Ferreira have argued that posting the video was necessary to provide him the best defense. Daleiden, the lead investigator for the Center for Medical Progress, faces both civil and criminal charges.

The argument centers on a California eavesdropping statute protecting confidential conversations. The banned video shows that the NAF meetings were a public gathering, demonstrating there could be no expectation of confidentiality in such a setting.

An attorney for Cooley and Ferreira, Matthew Geragos, concurred that they were entitled to make evidence public that could draw out witnesses and other information in an attempt to clear Daleiden in his criminal case.

Orrick dismissed the argument in his 24-page judgment, calling it “a wholly gratuitous effort to give Cooley and Ferreira a fig leaf to cover their plan to violate the [preliminary injunction] by making the raw footage and the other videos available to the public.”

Cooley and Ferreira “admit that their real goal was to score a win in the court of public opinion by releasing the PI materials,” Orrick wrote.

“They admit that the decision to post the videos on their website ‘was in the first instance a way criminal defense counsel through which they could get their side of the story out,’” the judge added.

Strangely, no complaint was filed in court against Merritt, and her motion to dismiss the charges will be heard August 24, as will Daleiden’s challenge to the “legal sufficiency” of his charges.

Ferreira said Monday that Orrick’s contempt order was “an unprecedented infringement on a state criminal case.”

Abortionists were documented in the blocked footage causally discussing things such as the fetus being “a tough little object” to take apart, that it was “gross” for an eyeball to have fallen down onto one’s lap, and the approach taken in an abortion procedure to avoid it being classified as partial-birth abortion.

The partial-birth procedure violates federal law, and so does trafficking in human body parts, along with altering abortion procedures to procure intact babies.

Pro-life advocates and Daleiden’s attorneys have contended throughout that charges against him and Merritt are politically motivated and driven by the abortion lobby and its supporters.

CMP’s June request for Orrick to recuse himself was denied.

Felony charges of using false ID against Daleiden and Merritt and a misdemeanor count of trafficking in human organs against Daleiden were dropped last year in Texas after attorneys argued that Harris County District Attorney Devon Anderson’s office had colluded with Planned Parenthood.

“As always, the abortion cartel is furious that its trade in baby body parts and its willingness to violate laws that protect preborn babies from gruesome abortion procedures are being exposed,” Snyder said in a press release. “Since the first video release two years ago, they have been waging a vicious campaign to punish-and permanently silence-our client.”

The suppressed NAF footage is just part of roughly three years of undercover video documenting of the abortion industry by the Center for Medical Progress, for which Daleiden is the project lead.

The videos have led to a Congressional investigation and heightened calls to defund Planned Parenthood of its millions in annual taxpayer subsidies. Numerous executives from the abortion giant were documented in the videos bartering in the trafficking of body parts from children aborted at its abortion facilities.

Daleiden has more footage that has not been released.