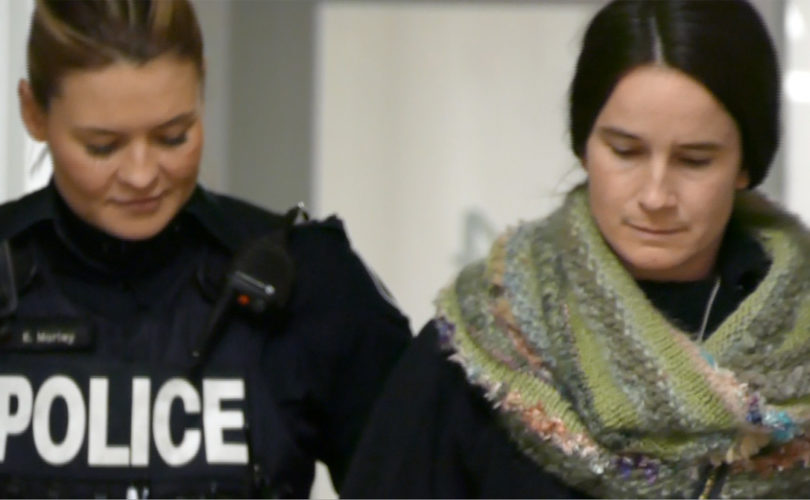 TORONTO, November 3, 2017 (LifeSiteNews) — An Ontario judge’s ban on publishing the name of an abortion “doctor” who testified at the trial of pro-life activist Mary Wagner is a “serious violation of press freedom,” says LifeSiteNews.

Superior Court Justice Julie Thorburn released a decision Thursday after hearing the Crown’s application on a publication ban September 18, in which LifeSiteNews intervened on Wagner’s behalf.

Wagner was arrested December 12 at the Bloor West Village Women’s Clinic while attempting to persuade the mothers to choose life for their unborn children. She was charged with breach of probation and mischief.

But the judge ruled it was in the interests of justice to ban publication of the name of the abortion “doctor.”

“All references to the doctor shall refer only to ‘the doctor’ without any further identification,” Thorburn said.

There is “a real and substantial risk of harm to the witness and a need to protect doctors who perform these legally protected services from that risk,” Thorburn said.

“Abortion is a controversial issue about which people have strongly held views.”

Thorburn described LifeSiteNews in her ruling as “a website that covers pro-life/anti-choice issues.” “anti-choice” is an abortion movement created term that has normally been used by more militant pro-abortionists to demean their opponents.

LifeSiteNews won the right to publish a pixelated version of  video surveillance showing “the doctor” dragging Wagner out of the abortion facility by her legs before the police arrived.

Thorburn noted in her 11-page ruling that Phil Horgan, lawyer for LifeSiteNews, submitted as evidence a 2012 survey of abortion facilities that reported “no instances of physical violence or threats of violence in Canada.”

But that did not “address the broader issue” of “risk to the witness based on past practice and past incidents of harassment, retaliation and harm,” she said.

This is “particularly true in the case of doctors who may live or work outside Canada as information circulated on the internet transcends national borders,” the judge noted.

“If reasonable concerns about safety are not addressed, they may choose not to assist with legally protected medical procedures.”

“We do not see Justice Thorburn’s rationale as acceptable, given what has apparently been flimsy evidence to justify such a heavy-handed decision against our press freedoms,” he said.

“What we appear to have here is extraordinary protection given by an activist judge to an abortion doctor and abortion center staff from normal media exposure and public accountability,” he told LifeSiteNews.

“One has to wonder what prompted the judge to go so far in ordering such a violation of normal press freedoms given the absence of convincing, verifiable evidence that any of the abortion facility staff would encounter serious threats should their names be made public.”

The Crown made an extraordinary application for a publication ban on behalf of the “doctor” and two abortion center staff at the outset of Wagner’s trial in May before Justice Rick Libman.

After LifeSiteNews contested the ban, Libman ruled “the doctor’s” name could be published.

He reasoned “the doctor’s” name was already in the public record, as it had been mentioned in LifeSiteNews articles on a previous trial involving Wagner.

Nordheimer’s order banned publication of the names of abortion center witnesses, all proceedings of the publication ban hearing, and the surveillance video clips.

Thorburn quashed Libman’s ban, ruling the trial judge erred in jurisdiction by applying a common law rather than a Criminal Code test in assessing if a ban was in the interests of justice, and issued her own ban.

Abortion “doctor’s” name must be expunged

She also ordered LifeSiteNews to remove “the doctor’s” name from reports of previous trials involving Wagner. LifeSiteNews was given 48 hours to comply.

Thorburn’s order can be read in full here.

The publication ban applies to all media outlets.

“It’s a full court press on banning free speech on abortion in Ontario, despite the recognition abortion remains ‘controversial’ in the eyes of this judge,” he added.

“Ontario citizens and other journalists should naturally ask, ‘What is it about this particular abortion doctor and abortion facility that has generated this level of judicial activism?’,” said Jalsevac.

“There is clearly more to this story than we and the public are aware. Further investigation by someone is warranted.”

Meanwhile, Libman convicted Wagner of breach of probation and mischief on August 15, and sentenced her September 29 with three years’ probation, and 15 hours community service.

Originally from BC, Wagner, 43, had already served nearly six months in jail awaiting trial, and has spent a total of four years and eight months in jail for her attempts to save the lives of unborn children.