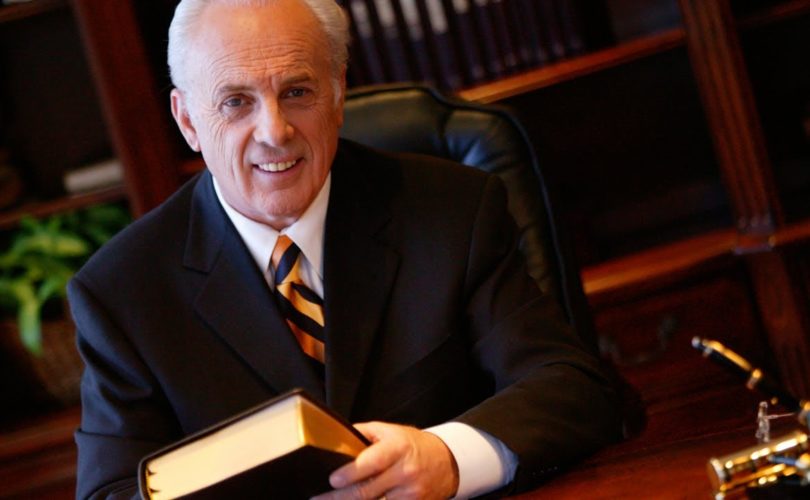 LOS ANGELES, August 26, 2020 (LifeSiteNews) – After weeks of back and forth, the California Superior Court decided that the County of Los Angeles can no longer attempt to obtain a court order prohibiting a Christian megachurch from holding indoor worship services.

Instead of granting a temporary restraining order against Grace Community Church led by renowned Pastor John MacArthur, Judge Mitchell L. Beckloff allowed the county to enforce its own health orders.

MacArthur and his worship center are represented by the Thomas More Society.

“This was their fourth unsuccessful attempt to obtain a court order prohibiting indoor worship services at Grace Community Church,” Jonna emphasized. “We look forward to fully vindicating our clients’ constitutionally protected rights in subsequent proceedings for this important case.”

His colleague, Jenna Ellis, said, “This should signal to LA County that California courts will not quickly or easily trample the constitutionally protected rights of churches.”

“We maintain that their health order is unconstitutionally burdening the right of churches to worship, and there exists no rational basis, much less a compelling interest, to try to shut down indoor services at this point, particularly when the county is allowing strip clubs to operate and massive riots to take place – and not seeking restraining orders against them,” she added.

MacArthur thanked the judge “for his reasoned opinion and for taking great care to review this very important matter.”

The pastor once again characterized the county’s attempt to essentially close down his church “as an illegitimate misuse of power. It should shock the conscience of every Christian that churches are coming under assault from our own government simply for holding church. Church is essential.”

Other churches in the Los Angeles area have made efforts to defy local governments’ orders to ban indoor worship services.

In Pastor Rob McCoy’s sermon at the time, he said, “And the powers that were given this nation were the first three words of the preamble of that Constitution, ‘We the People.’ And you have freedom to worship your God. It’s between you and Him and you’re accountable to God. And no man is allowed to take that.”

The pastor of Harvest Rock Church in Pasadena, just an hour from Godspeak Calvary Chapel, followed in McCoy’s footsteps.

“We want to win souls, see people come to know Christ as their Lord and Savior, and that’s much more of a value for us,” Pastor Ché Ahn told LifeSite’s Lisa Stover.

Ahn explained to other pastors around California and the whole nation that there comes a time when they have to exercise their First Amendment rights. “I haven’t broken the law, but the governor has,” he emphasized.

LifeSiteNews’ Jim Hale filed a video report of his travels to another Christian church in southern California that held in-person worship services in spite of the governor’s orders.

Members of Calvary Chapel Chino Hills had signed a petition to “recall” Newsom from office because of his pro-abortion, anti-religious liberty policies. In a “recall election,” voters remove an elected official from office through a direct vote before that official's term has ended.

In May, the U.S. Supreme Court had rejected a California church’s request to block the Golden State from limiting the number of people attending religious services.

Chief Justice John Roberts, appointed by Republican President George W. Bush, sided with the liberals and explained, “Although California’s guidelines place restrictions on places of worship, those restrictions appear consistent with the Free Exercise Clause of the First Amendment.”